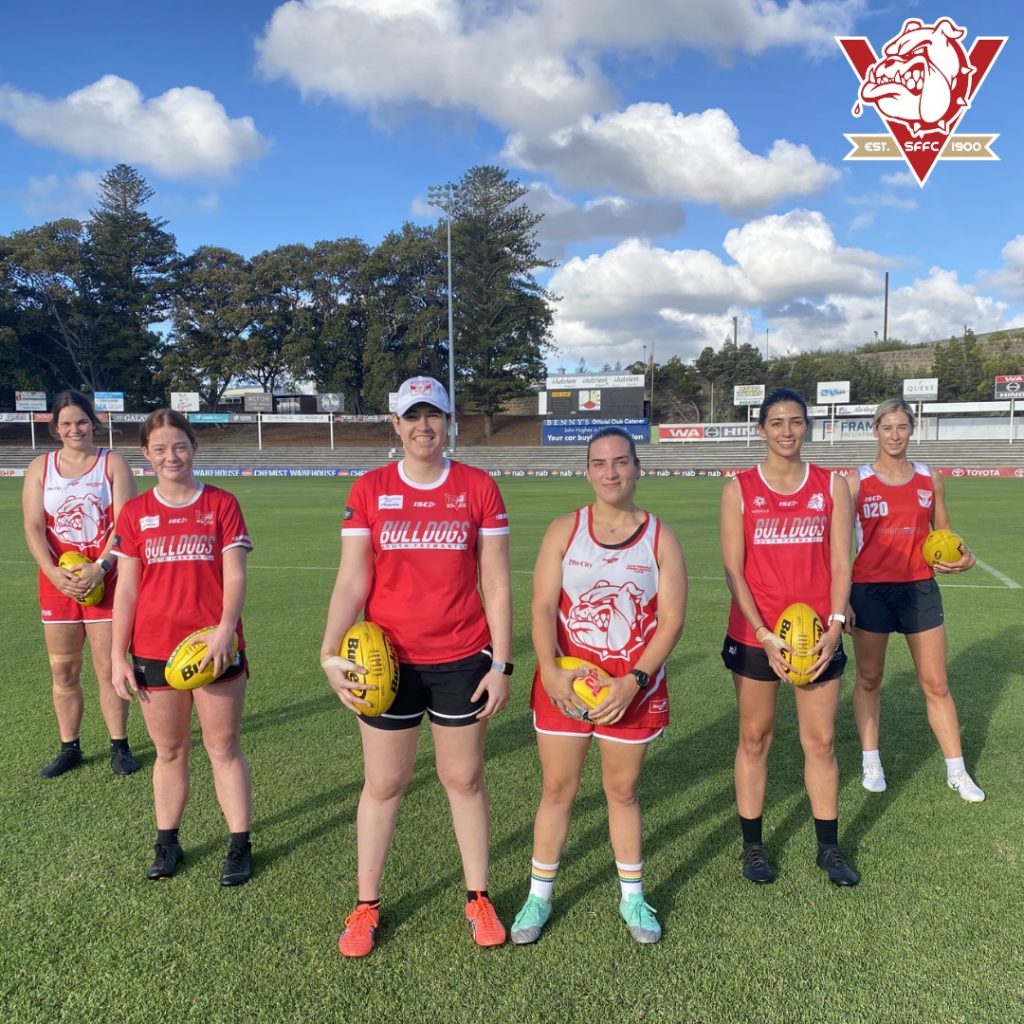 SOUTH Fremantle are gearing up for their second season in the Western Australian Football League (WAFL) Women’s with coach Beau McCormack excited by the young group of players making their way through the club.

“We’re trying to really emphasise South Fremantle as a destination club for females and the other clubs that have been around so we’ve been trying really hard to get an influx and we’re lucky enough to have had around about 19 new girls come to the footy club, this year as well so got a huge spread of girls,” he said.

Coming off the back of a shortened preseason – a similar story to last year – South Fremantle has taken everything in its stride whether it be having to accommodate for lockdown or being flexible with training programs throughout its preseason period to ensure the Bulldogs are in tiptop shape ahead of Round 1.

“We had a shortened introduction last year, three weeks and thrown into league football and this year we were doing our preseason and then had the word that the season was going to be brought forward so again we’ve had a shortened run up I guess. But preseason so far the girls have worked really hard. We have had some challenges with COVID as everyone has, and during some lockdowns the girls have, pushed each other and posted workouts and driven each other to continue to train, albeit with a partner. So, you know, we’re heading in a really good direction.

“We had a scratch match on the weekend and, you know, the fitness levels seem to be, on par with East Fremantle from what we saw so that was a good thing. Gives us a base to work on and see where we’re at and gauge the work they’ve done throughout the preseason,” McCormack said.

McCormack also touched on the difficulties his side along with the other teams in the competition have to encounter on a weekly basis as the players try and juggle a high intensity regime in their personal life.

“Trying to balance work and training and days, and games of roll and stuff at the moment it’s. You just have to have, as we do, a huge bit of flexibility around that, we obviously want girls to come to as many sessions as they can, but our stance on it is, is, family, work, and football, in that order.”

Although 2020 was a difficult season, with the Bulldogs unable to register a win and still finding their feet in the competition there is hope for improvement in the upcoming year as they aim to market South Fremantle as hot property for players to come to. Bursting at the seams with young talent and players in the state programme McCormack did not waste any time highlighting the players looking to make a name for themselves in the squad ahead of this season touting Pia Durk as another star in the makings thanks to her “tough attack on the footy” while there is plenty of promise around Evelyn Burry who “takes the game on and runs hard of half back.” Ash Reidy has also drawn the attention of McCormack with the youngster playing in the Grand Final at the Rogers Cup last year.

“She’s just super strong around the contest, has some great marking ability and her kicking as well so with Ash in full flight she will be the pretty exciting, she’s part of the Fremantle next generation Academy as well over here so you know they’ve already picked up on that, and if we can keep Ash fit and get her fitter as far as her knee I mean, we’re excited to see what she can bring to the team.”

However the side will be without star Taylah Cruttenden who became a regular for South Fremantle last year with the youngster committing to athletics ahead of the World Athletics in Kenya later this year. They could also be without the services of 2020 club leading goal kicker Poppy Stockwell for large chunks of the season given her cricket commitments. But with one door closing, another opens, as McCormack shed some light on a couple of exciting prospects set to take to the park and despite some only being new to the sport boast a wealth of raw potential and talent.

“We’re lucky enough to have Luce Gilchrist, who has been playing for a couple years in the Perth Football League Amateurs for Kurt and Wesley, an outstanding midfielder with just run and carry. It’s pretty phenomenal she’s still learning a game. “But Lucy is as ex-400m runner as well so she’s just can run all day long and skills. “Skills to clean up as she acknowledges, but it’s pretty exciting to watch.”

“We’ve got another young girl, Lauren Wakfer, her grandfather played at South Fremantle. She’s a young 16-year-old girl who’s in the state program. “Had a bit of timeout last year, with an injury and that but is growing every session and is exciting to watch. “In the scratch match on the weekend as well for a young girl, and her ability to go and ruck against some of these seasoned girls. “[She] just puts her body on the line, and just does it all with a massive smile and loves every minute of it so she’s really exciting.

“We have a new girl this year, she has only played one season of football I believe if I’m correct and her name is Makaela Tuhakariana. “She comes from a rugby background but she has burst of speed, and a sidestep that is just blowing people’s minds. “She has exquisite skills even at this stage, she can kick while running flat out. “She brings a tackling pressure obviously from rugby that you know we got some work to do on her technique but she’s not shy, in definitely impacting the contest and a person, in her way so she’s very exciting to watch and I’m sure there’s going to be some, some big things for Mikayla going forward.”

Casting an eye ahead to the upcoming season, McCormack’s main aim for the side was to play a brand of football that was hard hitting and free flowing to ensure that they could capitalise on their strengths.

“I think our brand football we set out last year to play a brand football of high impact football and being known for a hard hitting team, and I think we, we definitely set that example last year and it’s something that we take on and have taken in again to this year, as I said, you know, tackling pressure from my point of view is a huge part of the game and we don’t have it, we get it back,” he said.

“We’ve got some really good runners, that are in the side, just trying to get it out and quick movement of the football from, one end of the ground to the other sort of fast flowing, free flowing football.”