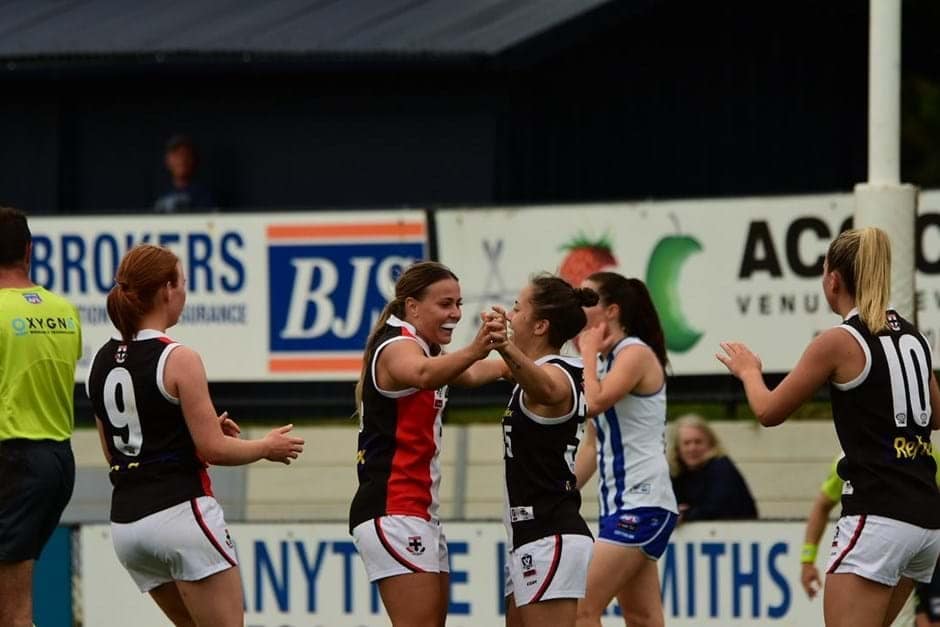 THE Southern Saints are setting no ceiling on their potential in 2021 according to incoming VFLW head coach, Dale Robinson, who says her players are “super excited” to be back out on the track ahead of season proper. Previously a St Kilda AFLW development coach, Robinson has taken the reigns of the Saints-aligned reserves side this year as both competitions run concurrently.

AFLW-listed players will now gain the opportunity to run out each week even when they are not selected in the senior side, with VFLW talent feeding off the experience of their elite level teammates, and NAB League prospects also filtering into the grade as each season progresses.

Robinson says there is some promising youth coming into the program at an age where their development could be accelerated in a senior competition. She outlined some of the standouts who will look to have an impact on the side in 2021, as well as the style of play fans can expect from the Saints.

“There’s a lot of young kids coming through that are at that age where they might have been out of the NAB League program now for a couple of years, but they’re really ready to develop their senior stuff,” Robinson said. “I’m excited about what some of those young kids can bring with the girls that have been there for a few years and built a really good culture around the club.

“I’m excited to see what Rebecca Ott can bring – she was actually elevated into the AFLW list a couple of weeks ago when, unfortunately, Nicola Xenos had a season-ending injury. “I think this will be a great year for her transition out of basketball to see what she can do from a footy perspective. “Georgia McLean has come across from Casey and I think she’ll add some good experience across our backline.

“Maddi Capsalis is another one that I think will have some significant growth this year, the way that she attacks the ball is just phenomenal and it’ll be exciting to see what she does. “Then there’s a couple of the NAB League kids like Abbey Jordan and Zoe Hill to come through the program as well, so there’s some good young talent there that I’m excited to see what they can do.”

“I think the way that we want to try and look at moving the ball is to really open things up and not be too predictable in the way we move the ball. “I’d like to see some really good defensive work all across the ground, that’ll turn into good offensive run.”

As St Kilda transitioned into the AFLW competition, it brought with it a heap of former Southern Saints-listed players who are now thriving at the top level. It meant the VFLW Saints would be forced into a heavy list turnover and talent search, which has been heightened by the loss of a whole season.

Still, Robinson says the group has remained tight and many of the players who were set to go around in 2020 have recommitted to the club. With a “one club” mentality further aiding the connection across both levels, the Saints were able to keep close throughout the unexpected break while maintaining good levels of football fitness and touch.

“We probably look very different from 2019 because obviously the girls that were playing at that time, a lot of them are actually part of our St Kilda AFLW side now,” Robinson said. “That was that real transition year where we led into our first year of AFLW, but we’ve kept the majority of the girls that we were bringing together at the start of the 2020 season and then we’ve added a few players from different areas that have fitted in really seamlessly.

“It’s been great to sort of have 12 months of connection with those girls even though it hasn’t necessarily been on the track… (now) they’ve brought that in and for built on it across the last 10-11 weeks.

“From a fitness perspective, the majority of them kept as much touch and fitness as they could so we found that most of them came back in reasonably good shape. “There’s been quite a bit of work around the touch side of things, just to get that feel of the ball back in the hands, but that’s coming along pretty well and that’ll only get stronger as the season goes on.”

The group’s togetherness showed as it was able to overcome North Melbourne’s reserves in a preseason hitout last week, winning by 28 points at Trevor Barker Beach Oval. With one more scratch match set before season proper, Robinson says the Saints will look to learn from their performances with the chance to cap off a strong preseason.

“There were some really good things to take out of the game from an education perspective,” she said. “To look at the things that we’ve been working on over the season – what works, what we still need to put a little bit of time into… I was really happy with the way they ran out our practice game last week and I think that’ll put us in good stead to have a good season.”

The Saints’ six-player leadership group will be headed by a trio of co-captains in Tara Bohanna, Deanna Jolliffe, and Frankie Hocking. Robinson says the leaders voted in were largely reflective of who the coaching staff had identified for the role.

“We announced our leadership about three weeks ago, we have three co-captains that have really epitomised the way we’ve gone about our preseason and the player vote was reflective of the leaders that I’d seen coming through,” she said.

While no fixture has officially been released as of yet, the Saints are set to commence their VFLW season in late-February, hoping to match the competitiveness shown by their AFLW counterparts.