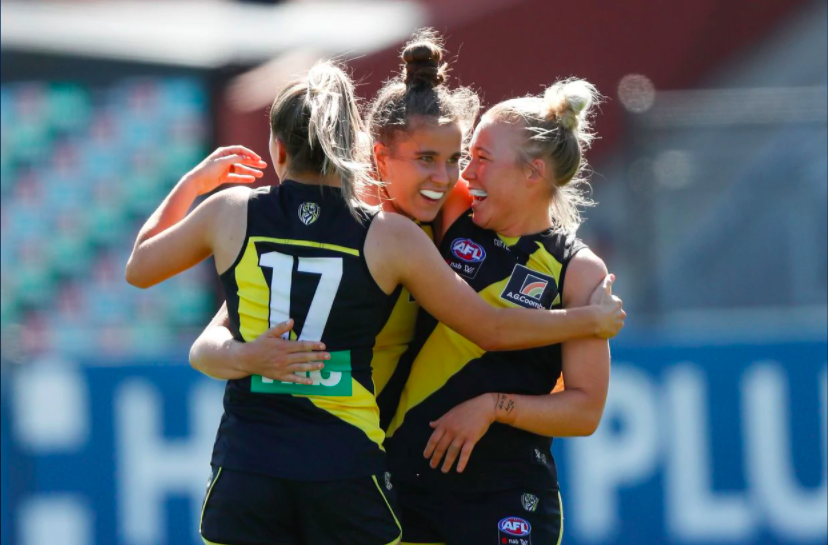 ROUND 3 of the 2021 AFL Women’s season went ahead over a four-day stretch after even more late fixture improvisation, with a number of fresh faces continuing to make their mark on the competition. We run you through how Generation W’s generation next fared over the weekend, focusing on the players under 21 years of age from the most recent draft crop.

In a fixture which feels like it was so long ago, 2020 number two pick Jess Fitzgerald again lit up the field in a Western Bulldogs win. The Northern Knights graduate was a little quieter throughout the game than in her opening two outings, but sealed the game for her side with a highlight reel running goal late in the piece to leave onlookers with their jaws to the floor.

Somewhat flying under the radar, fellow Bulldogs draftee Sarah Hartwig was again impressive, rebounding confidently off half-back and up to the wing. Geelong tall Olivia Barber continued her promising start to life at the elite level, clunking a terrific contested mark and proving mobile in her work up forward. Northern Territory native Stephanie Williams was also lively in patches, but kept to four touches and two tackles.

Gold Coast and Greater Western Sydney (GWS) again did battle in horrendous conditions, with the Giants prevailing on the back of greater experience and class. It showed on the team sheet too, with no under 21 draftees from last year taking the field, but 19-year-old Georgia Garnett making her debut. On the other hand, four of Gold Coast’s young first year players were selected with Janet Baird making her maiden senior appearance.

The Territorian was relatively quiet with two disposals, with all of her fellow under 21 draftees – Maddison Levi, Lucy Single, and Daisy D’Arcy kept to under 10 touches each. Nonetheless, each of them got their hands dirty in the wet conditions as they were spread on all three lines, displaying the green shoots Gold Coast will require to get on the board this season.

Carlton got on the board for the first time in 2021 with a steady victory over the competitive St Kilda Saints, with players making their debuts on either side. Daisy Walker became the Blues’ second 2020 draftee to crack the senior team and looked lively in defence with her speed on the rebound. Jessica Matin, a promising junior cricketer, also broke her duck and had a couple of touches for St Kilda.

Elsewhere, the Saints’ prized pick in Tyanna Smith was again impactful from midfield with 11 disposals, four marks, and six tackles, but came up against some pretty stiff competition in the Carlton engine room. After a very good showing last week, Mimi Hill was kept to just six touches for the Blues but looks settled in the starting lineup on a wing.

One of the best AFL Women’s matches of all time saw Melbourne get the hop on North Melbourne with a captivating nine-point win. The cream rose to the top but there was still some young talent roaming Casey Fields on the day, with Melbourne continuing to blood Alyssa Bannan and Eliza McNamara. Both had promising spurts in the red and blue, while North’s prized draftee Bella Eddey booted a goal from her six touches – five of which were handballs.

Fremantle and Adelaide locked horns at Norwood Oval on Sunday, with the Dockers coming away 30-point victors and handy premiership favourites. Their mature members were fantastic as ever, but that did not stop the likes of Sarah Verrier and Mikayla Hyde from providing a glimpse into the future.

Verrier was typically assured in defence and played to her strengths with all nine of her disposals coming via foot. Hyde was not far behind on six touches and a couple of marks, also playing her role in the win. For Adelaide, Teah Charlton lit up the final term with some exciting passages, exploding in forward charges to eventually end with 14 disposals and five tackles.

A trio of 2020 draftees all secured their maiden senior goals on Sunday as Collingwood defeated a fast finishing Richmond by 17 points at Punt Road Oval. Richmond’s number one pick Ellie McKenzie was at the forefront, snaring a double which included a three-bounce effort consistent with her junior form. She was outstanding, finishing with 12 disposals and five tackles.

Collingwood ruck Bella Smith stood up in the absence of Sharni Norder, taking on the primary ruck duties and fighting hard against in-form opposition. Father-daughter coup Tarni Brown booted her first goal and was matched by Joanna Lin, but both players were relatively quiet otherwise. Brown was the pick of the pair, finishing with eight touches and seven tackles.

Brisbane roared back into top spot with a 45-point win over West Coast, dominating after half time and flexing its muscle. Courtney Hodder was the sole under 21 draftee from last year in the Lions’ lineup and continued her lively start to the season, finishing with 12 disposals and five tackles as she constantly looked to break forward quickly.

Bella Lewis was arguably the pick of West Coast’s young first year players, ending up as her side’s second highest ball winner with 15 touches. Her ability to cleanly win the contested ball and constantly burrow in suited the Eagles’ first half intensity. Shanae Davison popped up in the front half for four disposals, while Amber Ward had double that tally up the other end to go with three rebounds.