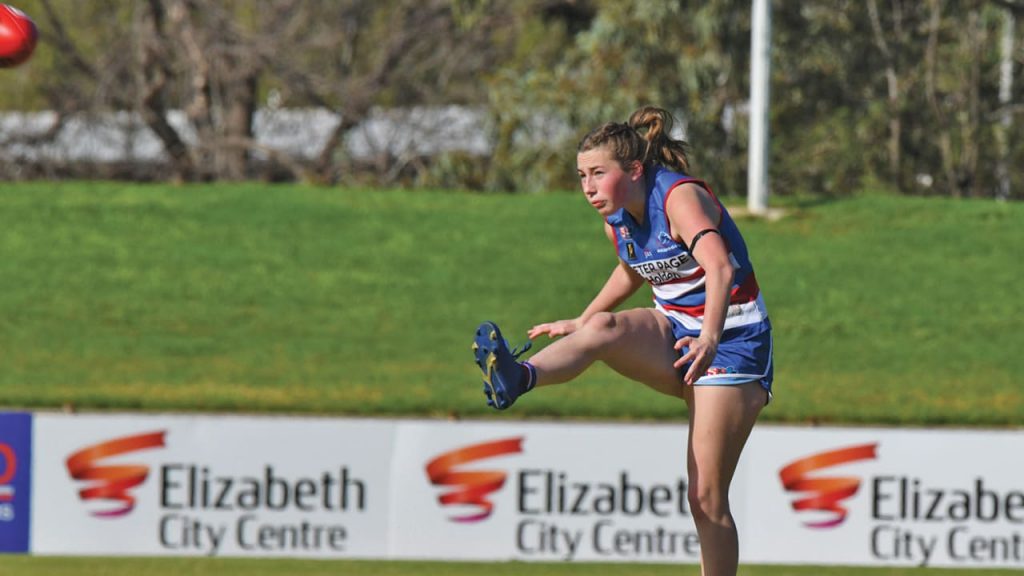 IN the first of four SANFL Women’s Ones to Watch, we take a look at those Central District and Glenelg players inside the South Australian Under-19 State Academy, and what they could offer for their club.

One of Central’s standout top-agers this season, Breguet has a number of exciting traits that are symbolic of Central’s rise. Cementing her spot in the team, Breguet can play a roaming role across the ground, and is someone who takes the game on when given the chance. A fierce tackler who attacks the contest with a high work-rate, she is building her ability to win the ball more and have that strong balance between offence and defence.

A dominant player at local level, Fiebeger is one that will no doubt step up and become a regular for the Bulldogs in 2021. Playing for Angaston in the Barossa Light and Gawler Football Association, Fiebiger was sensational in the Panthers’ Grand Final win, taking out the best on ground medal. Throw in the league best and fairest at Under 17s level, and Fiebiger has quite the CV entering the 2021 season as a bottom-ager.

When it comes to breaking lines and taking the game on, Huynh is the player to get the ball in the hands of with her acceleration off the mark. She has clean hands at ground level and predominantly plays as a high half-forward, but can switch between the midfield and forward 50. She reads the play well off hands, and Huynh can sniff out a goal or set up other teammates, and will be looking to build on a solid season last year.

Captained the South Australian Under 16s side, so is a natural leader within the club and state program. Having just turned 18 on the weekend, Lane is someone who has predominantly spent her time as a defender at the Bulldogs. She can move up the ground into midfield if required, but seems comfortable in the back half with her ability to intercept and keep the ball moving in transition.

A skilful and clever player, Morriss is one who can just about play anywhere on the field. The Glenelg over-ager showed last season that her ball use and decision making are among her top traits, and once she finds more of it, she will be even more damaging. A talent that teammates love to get the ball in the hands of in order for her to go to work and set up plays down the field in transition. If she played up the ground off a wing or running off half-back she can dictate play.

Having made her debut at the League level last season, Tonon has natural leadership ability in her blood having been vice-captain of the South Australian Under 16s side. She impressed as a forward pocket for the Bays in 2020, and as a natural midfielder at junior level, expect her to move up to a role that benefits her skillset and footy smarts. Only lightly built, but she can attack the contest and another player who is comfortable with ball-in-hand going forward.