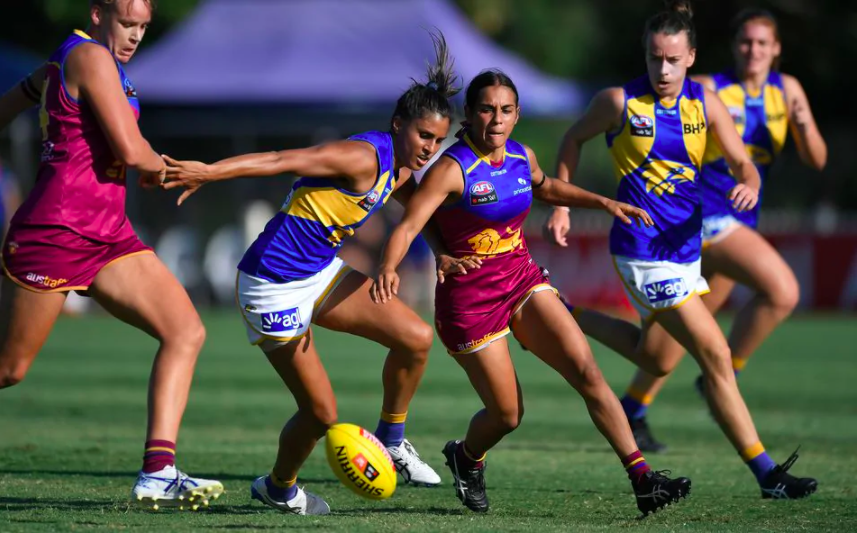 BRISBANE has reclaimed top spot on the AFL Women’s ladder after a five-goal third term saw the Lions run out 45-point winners against West Coast at Hickey Oval. In the competition’s first-ever Monday night fixture, the home side was tested early but absorbed all of the Eagles’ first half pressure to then slingshot it back at them thereafter in what ended up a comfortable 10.5 (65) to 2.8 (20) result.

Having booted 15 goals and conceded just one across the first two rounds, Brisbane was hounded by West Coast in the first half but somehow managed to scrounge a one-point half time lead. It was a case of the Eagles ruing missed opportunities, particularly in the opening quarter as the Lions found it all too easy to score once they broke out of their own half.

While West Coast’s pressure gauge was at an all-time high, the lack of scoreboard impact proved telling once Brisbane clicked into gear. A flurry of three Lions goals immediately after half time broke the game open, and eventually broke the Eagles once that feat was extended to five. The difference; Brisbane was ruthlessly clinical with their territorial advantage, while the Eagles lacked the polish to make good on theirs.

There were some key individual performers and breakout stars across the board, with arguably none more impressive than Brisbane tall, Taylor Smith. The 21-year-old finished with five marks and three goals from her 11 disposals in an exciting display, proving a good barometer for Brisbane’s eventual scoring flow.

Dakota Davidson was strong early and snared two majors to now head the competition’s goalkicking charts. Veteran Lauren Arnell led all comers with 18 touches in a vintage display, as the likes of Sophie Conway (15 disposals), Nat Grider (15), and Ally Anderson (14) all stood up when it mattered. Kate Lutkins and Breanna Koenen were important down back when the pressure was on, while Greta Bodey and Orla O’Dwyer worked to break the game open in the second half.

In what was largely a front-loaded effort from the Eagles, Aisling McCarthy (17 disposals, one goal) gave her all rotating forward from midfield, much like Parris Laurie did in the ruck. Young midfielders Bella Lewis and Mikayla Bowen were both promising in patches with their attack on the ball, with skipper Emma Swanson solid and Imahra Cameron a shining light up forward.

With Round 3’s fixtures run and done, the next set of games lie just around the corner. Both sides are set to play next on Sunday, with Brisbane back home to take on Adelaide while West Coast travels once again to face Greater Western Sydney in Blacktown.