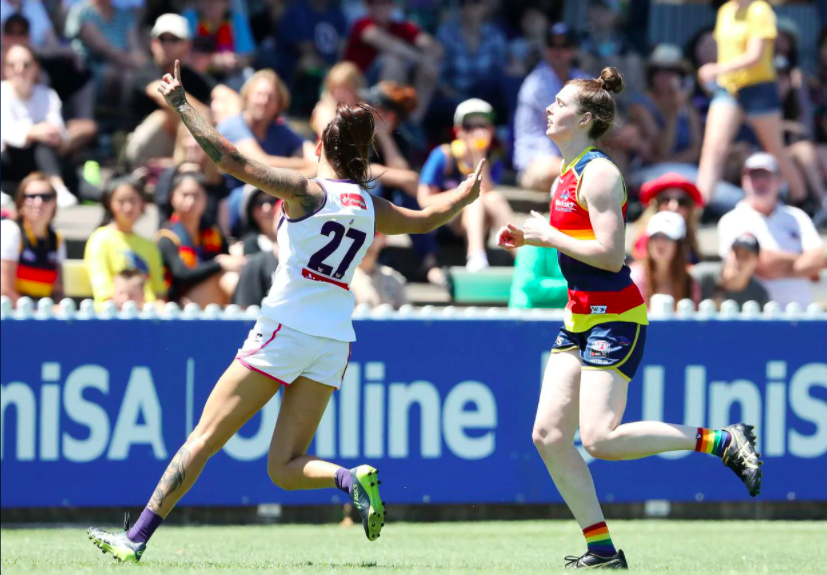 FREMANTLE continues to set the AFL Women’s benchmark after notching a 30-point win over fellow finals fancy, Adelaide on a cracking afternoon at Norwood Oval on Sunday. The 7.1 (43) to 1.7 (13) result was Freo’s tenth-straight win in the competition and puts the Dockers in top spot with a game left to play in Round 3.

Despite both sides managing an equal amount of scoring shots (eight), it was Fremantle’s superior fluency in transition, unrelenting pressure, and capturing of each vital moment which saw it succeed. The Dockers absorbed plenty of pressure, particularly in the first term before hurting Adelaide up the other end with scoreboard pressure, keeping the Crows goalless for three quarters and ensuring they would be made to earn each opportunity.

The game was well and truly alive just after the main break, but the Crows were left to rue missed chances off the boot of Stevie-Lee Thompson early in term three as Fremantle skipped up the other end and added three majors to their mounting lead to put the contest to bed.

There were a couple of blockbuster contests scattered across the field, with stand-in Adelaide skipper Sarah Allan tasked with marking the dynamic Gemma Houghton, while the ever-reliable Kiara Bowers ensured Crows midfield bull Anne Hatchard was not given an inch in the first half.

Allan was terrific on the day with desperate defensive efforts and solid one-on-one work both in the air and on the ground, but could not keep Houghton quiet for the whole day as she finished with two final term goals. Bowers and Hatchard went blow-for-blow at the coalface and had plenty of bone-crunching clashes as two of their respective sides’ most prolific ball winners.

Bowers was in fact Fremantle’s highest disposal getter with 23 to go with her 13 tackles, as Adelaide’s Ebony Marinoff joined her in leading all comers for touches on the day. Hatchard finished with 21 disposals, while a late move forward for Erin Phillips saw her notch six marks and a goal from 14 touches. In her first officially listed outing, Rachelle Martin was lively with 14 disposals, with Thompson another standout and Teah Charlton exciting in the final term for Adelaide.

Ashley Sharp joined Houghton on two goals upon her return, as the likes of Tiah Haynes and Sabreena Duffy joined her on the scoreboard. The run of Stephanie Cain (15 disposals, six marks) and Ebony Antonio (13 disposals, four inside 50s) was vital in creating more open scoring chances for Fremantle, while the defensive solidity of Janelle Cuthbertson (10 disposals, three marks, four rebound 50s) again proved outstanding in the win.

The Dockers are set to face Gold Coast in Round 4, back on home turf, while Adelaide will look to bounce back quickly as it travels up to Queensland to take on another currently undefeated side in Brisbane at Hickey Park on Sunday.

COLLINGWOOD maintained its perfect 2021 record in tact on Sunday afternoon, swooping early to down Richmond by 17 points on enemy territory. In what was the first fixture between these two traditional rivals at Punt Road Oval since 1964, the Magpies set up an unassailable lead at three quarter time and held off the fighting Tigers thereafter to run out 7.6 (48) to 4.7 (31) victors.

The young and inexperienced Richmond side was made to pay for missed opportunities, particularly in the second term when the Tigers owned patches of valuable territory and possession, but could only scrounge three behinds while the Magpies added a vital major. Despite some rawness showing inside 50, both sides showed great intent in looking to move the ball forward quickly and catch either defence off guard.

There were three first year players who kicked their first senior goals on the day, with number one pick Ellie McKenzie booting two for Richmond after Collingwood pair, Joanna Lin and Tarni Brown both capitalised on their opportunities close to the big sticks. Lively Magpies forward Aishling Sheridan continued her good form, matching McKenzie with a game-high two majors in the win.

Brittany Bonnici returned one of the finest statlines in Collingwood AFLW history with 31 disposals, 10 marks and four tackles, while fellow midfielders Bri Davey (25 disposals, seven tackles, one goal) and Jaimee Lambert (25 disposals, six inside 50s) were also impactful from the engine room. Chloe Molloy worked into the game to finish with a goal from her 12 touches, as Ruby Schleicher again impressed down back with slicing run-and-carry among her 17 disposals and five rebound 50s.

For Richmond, Monique Conti again saw the most ball with 25 disposals, while the likes of Katie Brennan (17 disposals, five marks, six inside 50s) and McKenzie (12 disposals, five tackles, two goals) finished extremely well to lead the fruitless Tigers fightback. Sarah Hosking proved a bright starter before landing on 15 touches overall, while Harriet Cordner continues to hold up the defence and Gabby Seymour gets better each week in the ruck. Debutant Tessa Lavey also fit in seamlessly, gathering 15 disposals from the wing.

The Tigers face another of their traditional rivals in Carlton as Round 4 rolls on, set to light up Saturday afternoon at Princes Park, while Collingwood faces its toughest test yet in a blockbuster clash with North Melbourne at Marvel Stadium on Saturday night.