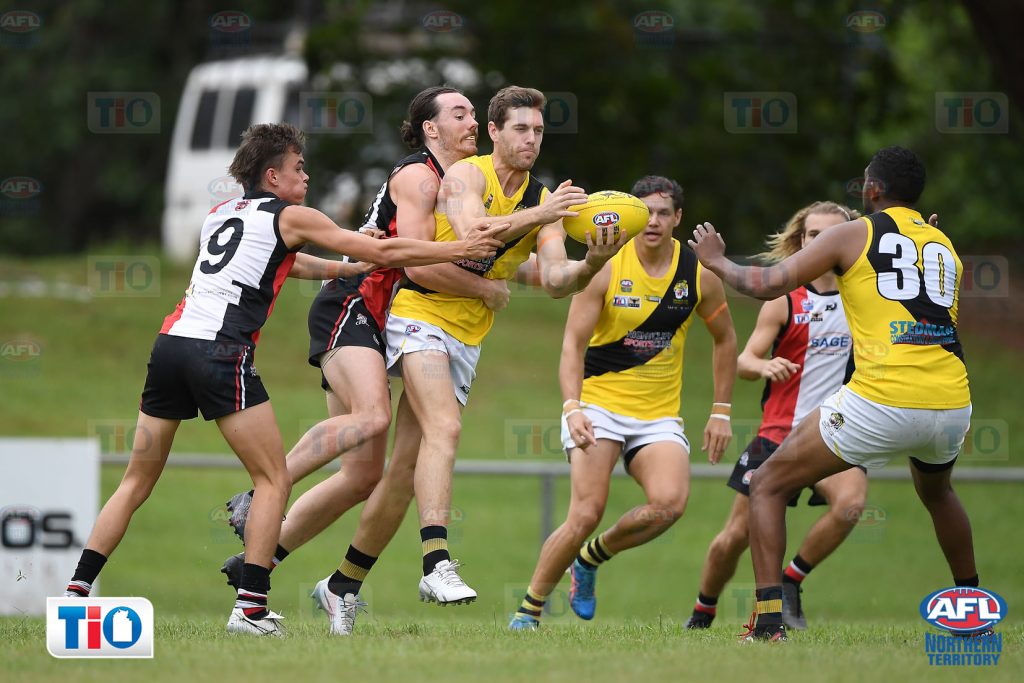 NIGHTCLIFF wrapped up the 2020/21 Northern Territory Football League (NTFL) Men’s Premier League minor premiership in Round 17, labelled NO MORE Round as the competition takes a stand against family and domestic violence. The Tigers were emphatic in victory on the eve of finals, as was St Mary’s, while Wanderers had a trickier time handling a pesky Palmerston outfit and Darwin claimed a confidence-boosting win over top five rival, Waratah. That, and more in our weekend wrap.

St Mary’s took its time to click into gear and accelerate away from Tiwi on Saturday, but did so in emphatic fashion with a 143-point triumph at TIO Stadium. The 26.26 (182) to 6.3 (39) result saw the Saints conjure 52 scoring shots to Tiwi’s nine, with a 60-point half time lead merely a sighter of what was to come. Earlier, the Bombers hit the front in an 11-goal opening term but their ascendancy was short-lived as St Mary’s turned up the heat to come away big winners with one round left before finals.

Jackson Calder was the key destroyer, booting eight goals as St Mary’s spearhead and backed well by Jack Landt (six goals), who enjoyed a move further afield among the engine room. Nate Paredes (three) also found the big sticks in an impactful display from midfield, while Lachlan Taylor earned the Spirit of the Game award for his efforts. Brendan Kantilla took out the same honours for Tiwi as his side’s best afield, contributing well alongside the dependable likes of Paddy Heenan and Adam Tipungwuti. St Mary’s takes on Wanderers next week in a battle for second, while Tiwi will hope to finally get a win on the board next week having already been handed the wooden spoon.

Nightcliff wrapped up the 2020/21 minor premiership with a statement of intention, thumping Southern Districts to the tune of 115 points at Norbuilt Oval on Saturday. A nine-goal to one second term saw the game ripped open, as Districts failed to recover and managed just one goal after half time in the face of the Tigers’ roar, culminating in the one-sided 21.16 (142) to 4.3 (27) scoreline. Nightcliff’s deep forwardline dynamic and slick running game earned it 37 scoring shots to seven and a week off for the first round of finals.

Andy Moniz Wakefield was terrific for the victors, booting two goals and finding plenty of the ball. Jack Hammond was also thereabouts and snared three majors, matched by John Butcher and only beaten by Trent Melville (four goals) on the day. The likes of Daniel Bowles and Kaine Riley were also impactful further afield. Billy Rolfe (two goals) was Districts’ lone multiple goalkicker, while young gun Brodie Lake took out the Spirit of the Game award ahead of the likes of Michael Bowden and Dean Staunton.

Darwin gained an early mental edge over Waratah before their elimination final bout in a fortnight, trumping their rivals by 19 points at TIO Stadium on Saturday evening. After a tense opening stanza, the Buffs pulled away with four goals to two in the second term to set up a game-defining lead, before finishing strongly to run out 11.7 (73) to 7.12 (54) winners. With one less scoring shot than the Warriors, Darwin made its opportunities count at the right times.

Nathaniel Cooper was one of four Buffs to boot multiple goals, managing three as Joey Collinson, Cade Abala, and Brodie Foster each snared two. Timothy Eldridge earned Spirit of the Game honours, an award also taken out by Jack Cattanach for the Warriors. Dylan Collis was his side’s sole multiple goalkicker, one of Waratah’s better performers alongside Sam Godden. The win came at a cost for Darwin, who lost key men Michael Coombes and Michael Hagan to injuries on the eve of finals.

Wanderers will play off against St Mary’s for second spot next week after sneaking past Palmerston by 25 points at Cazalys Arena on Saturday night. The Muk Muks secured their double finals chance but were made to earn it, falling behind early before clawing back ahead by under a goal at the second and third breaks, and eventually kicking away late. Five goals in the final term saw them earn a fighting 10.8 (68) to 6.7 (43) victory, still two points adrift of second place.

Competition leading goalkicker Brett Eddy added three majors to his season tally to lead Wanderers’ attack, which boasted eight individual goalkickers. Defender Brodie Newman was among them, earning best afield honours for his work while Deacon Braun and Thomas Motlop were other Eagles to impress. Eric Guthrie earned Palmerston’s Spirit of the Game award, returning a typically trying shift alongside the likes of Chris Williams (two goals) and Matthew Dennis.