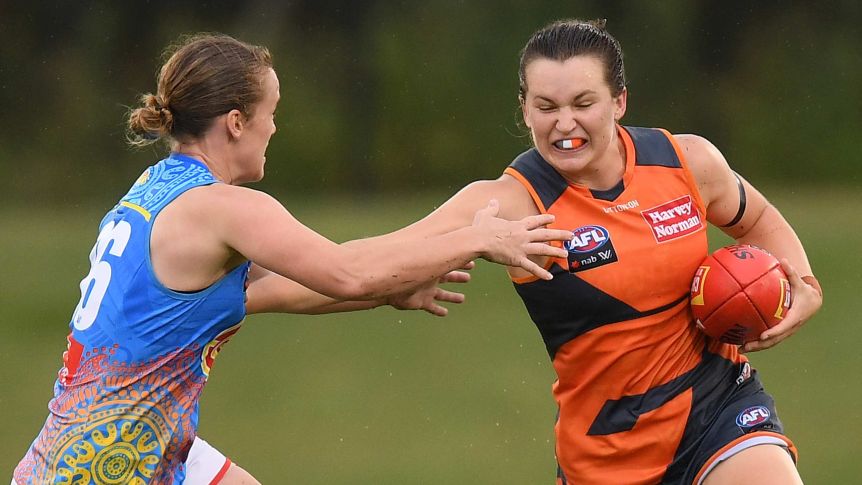 THE Greater Western Sydney Giants finally put a win on the board on Saturday afternoon, defeating Gold Coast Suns in a rain-affected encounter at Blacktown International Sportspark, 2.6 (18) to 1.2 (8). Both teams were coming into this match off the back of comprehensive Round 2 losses, and while the Suns pressed hard after a tough first quarter, it was to no avail in the wet weather as they failed to put a major on the board until the final minutes of the match.

In an excellent start to the match the Giants were just about unstoppable, hogging the footy as Alyce Parker and Bec Beeson could not be separated from the action, as Taylah Davies and Alicia Eva slotted early goals to open proceedings and put some space between them and the traveling Suns. While the Suns were relatively composed running out of half back and dominated the marking contest, led by Jade Pregelj who collected a number of rebounds and Alison Drennan who piled on the physicality, the side could not clear the footy through the tightly contested Giants as a clogged midfield continuously sent the ball soaring back inside 50. While the tides changed in the second, with a clear scoring end coming to fruition as the Suns piled on the offensive pressure, the away side just could not pile on the scoreboard intensity they needed with the footy continuously rebounding between Lauren Ahrens and Elle Bennetts. A 15-point margin at quarter time only slightly changed to 16 points as the main break came around, with both sides failing to put a goal on the board.

Whilst the weather cleared up in the second half, the slippery conditions remained as frantic footy was played through the midfield and a tight one-on-one defence from both sides denied any easy chances for clearances. While the Suns denied the Giants a single goal after the first term and Jamie Stanton finally broke the drought with a Suns goal in the last minutes of the match, it was a tough slog for the Suns in a much tighter encounter than the scoreline suggested.

The trio of Parker (24 disposals and five tackles), Beeson (23 and seven) and Eva (15 and one goal) was impressive as ever, while Haneen Zreika was unstoppable early to finish with seven tackles and opposing rucks Erin McKinnon and Lauren Bella racked up 20 hitouts apiece. The Suns’ physicality was excellent with Drennan (22 disposals, 12 tackles) combing well with Serene Watson and Hannah Dunn (eight and seven tackles, respectively) while Ahrens and Stanton were also solid.

The second match of the evening saw the Saints host the Blues at Moorabbin, in the first crowd-less matchup of the round. Perfect conditions in Melbourne saw the home side get off to the perfect start, as Caitlin Greiser would not be rendered goalless for the second straight round and put the first goal through for the match with minute left in the quarter as the Saints dominated the early stages. With Greiser taking centre stage up forward for the Saints, the Blues would not be left wondering what could be playing an extra back to lighten the load of the likes of Mua Laloifi, but Greiser’s beautiful gather and goal from an angle well and truly outclassed the Blues backwoman on return from injury, allowing the Saints some breathing space and a slight seven-point upper hand heading into the first change.

But it was not all doom and gloom for Carlton, as the side picked up their game as the second term rolled around with two shocking weeks behind them and no desire to head in that same direction once more, as the side well and truly took advantage of the blustery wind to pile on the scoreboard pressure in the second quarter. It took only a perfect start from Elise O’Dea who was sent forward to do what she does best, hitting the scoreboard quickly and seeing the rest of the side pick up their game immediately as Maddy Prespakis got in on the action with a snap out of the back of a contest, and seeing a couple of excellent chains of handballs keep the footy moving fast down the field, evading Saints’ possession. While it was the experienced Blues cohort that got the show on the road in the second quarter, it was the young talent that lifted in the second half as Prespakis was aided by Grace Egan, Georgia Gee and Abbie McKay, with the latter two finding much more of the footy as the match opened up. A Kate Shierlaw purple patch – including the Saints’ second goal – was cut short as the tall was briefly sent off the field for a head knock, whilst the likes of Georgia Patrikios and Tyanna Smith were influential around the footy, matching up well against the Blues’ talent but unable to apply the offensive pressure the side so sorely needed.

A tough contest was had in the final term, and while the Saints proved they were more than capable of taking the game on, it was not enough as the Blues had the momentum and wind going in their favour. Whilst the Saints midfield and back-end worked in overdrive to push the footy forward once more, the Blues shut down the centre corridor and minimised options on the wing to continuously propel the footy back inside their attacking 50. Nic Stevens‘ second goal of the game – a soccer off the ground from within the square – well and truly put the ice on the cake for the then-winless Blues, as the side ran home with a solid 6-4 (40) to 2.4 (16) victory.

For the successful Blues, Prespakis and Egan led the way with 24 touches apiece, combining for eight tackles between them while McKay was not far behind with 17 touches and seven tackles alone. O’Dea had her best match in the navy blue, piling 21 disposals onto her season tally and booting the side’s opening goal, while Jess Hosking and Breann Moody were solid as ever. For the Saints, Patrikios was excellent with 20 disposals and five tackles, while Hannah Priest (18 disposals, six tackles and five marks) and Rosie Dillon (14 disposals and nine tackles) were also solid targets around the ground.

Dees triumph thanks to second term

Melbourne reigned supreme in an almighty top four battle as the Demons came from behind to claim an emphatic nine-point win over North Melbourne 9.6 (60) to 8.3 (51). Both sides headed into the Round 3 match undefeated but Melbourne proved their status as a powerhouse side in the AFL Women’s competition. highlighting their attacking mentality and peppering away at the goals in the second term to flip the script.

Despite multiple chances throughout the opening term the Dees struggled to find their kicking boots early while North Melbourne nailed the first two goals of the game. With the ball spending majority of time inside 50 for Melbourne, the Demons finally struck their first major as the clock ticked down to quarter time reducing the deficit to three points at the break. That momentum trickled into the second term as the Demons showcased their ability to link up with handballs and weave their way forward to steal the lead and slot four consecutive goals. Tegan Cunningham and Jackie Parry inspired the comeback second term with the pair combining for four goals in that quarter alone, showcasing their ability to get the job done both in the air and at ground level with Parry roving the pack and slotting a nice goal to really give Melbourne the ascendancy heading into half time.

Melbourne stretched the lead out to as much as 25 points before the Kangaroos tightened things up in the third term to pile on the scoreboard pressure and nullify the influence of the Dees. With a number of key cogs in the blue and white, the Roos found a way to be damaging as Daria Bannister picked up the slack with two goals in her side’s four goal term. But sensing a momentum switch, the Demons regathered their composure in the final stanza to keep North Melbourne at bay, trapping the ball inside 50 despite the margin getting as close as three points with only moments to spare.

It was the usual suspects for the Kangaroos that stood up in the contest as Jasmine Garner took the game into her own hands as shown through her mammoth 15 disposals, 12 tackles and two goal effort. Emma Kearney chimed in, amassing 16 touches while also slotting a timely goal to keep the Roos within touching distance of the Demons. Ashleigh Riddell was a key contributor with her 17 disposals as was Kaitlyn Ashmore who managed to find plenty of the footy thanks to her 16 disposals and two tackle performance. Jenna Bruton threw her weight around laying six tackles to accompany her 14 touches while Bannister kept the scoreboard ticking over banging home two majors.

For the Demons, Karen Paxman was a force to be reckoned with directing traffic and picking up a game-high 25 disposals. Paxman was involved in just about everything and made full use of her physical nature to match up against Kearney through the middle while on the goal-scoring front Cunningham was proving too big and too strong, outmuscling her opponents and kicking true out the front. Cunningham finished with two goals for the game as teammate Parry impressed with her three majors. Youngster Tyla Hanks provided that element of run and carry across the ground picking up 23 touches and nine tackles as Kate Hore was a real livewire with 15 touches and three marks. Maddison Gay made her presence felt recording seven tackles and 16 disposals in the win with Lily Mithen also a key playmaker for the Dees amassing 21 touches.