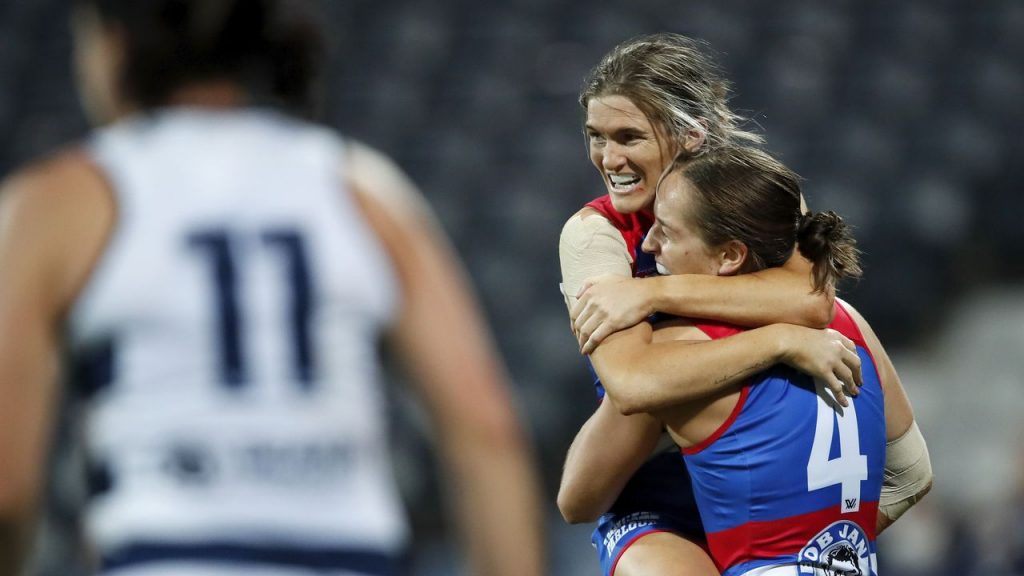 THE Western Bulldogs executed their first back-to-back win since 2019 in their AFL Women’s Round 3 encounter against Geelong, winning by 18 points in a tough slog until the bitter end. Whilst the Dogs put the first major on the board during the first, it took the side until the final quarter to really pile on the offensive pressure, eventually running out deserving 3.6 (24) to 1.3 (9) victors.

The only Victorian-based match with a crowd for Round 3 was always set to be an interesting one, with two sides really looking to prove themselves and make the most of onlookers at the venue. The Cats had plenty of support behind them at home at Kardinia Park, but it was the likes of Ellie Blackburn and opening goal kicker Izzy Huntington who seemed to be the backbone of the Dogs side, especially early on as the former led all comers with both possessions and vision to set up a vital scoring opportunity.

Forced to taking a defensive approach during the first half, the Cats laboured away with Olivia Purcell working hard on and off the ball, aided by Amy McDonald who did not shy away from the contest, utilising her speed and evasiveness to collect a couple of excellent run-down tackles. Phoebe McWilliams also saw plenty of action, booting the Cats’ lone goal in the third quarter credit to an excellent forward press from the Geelong squad, battering the 50 and relentless on their pursuit. Bulldogs’ Ashleigh Guest was never far away from the contest, dealt a blow to the ribs from Steph Williams during the second before coming off in the last quarter with a nasty looking head knock, while all bar three players across both teams picked up at least one tackle, showcasing just how much physicality was felt across the ground.

The final quarter fate was sealed by a huge goal from Bulldogs young gun Jess Fitzgerald, with the former Northern Knights talent taking the footy for a run through the centre of the field, eventually finding the 50-metre line and booting a long goal for what is sure to be a goal of the year contender, extending the lead to the eventual 15-point winning margin. While the hardened Cats – led off the half-back by the combination of Amy McDonald, Aasta O’Connor and Meg McDonald – well and truly showed up in the third, getting within one point of the Dogs as the three quarter time siren sounded, it was not enough to reign supreme as the travellers proved no longer weary, piling on 2.3 in the final quarter to run away with the victory.

A tackle-happy Bulldogs trio of Blackburn, Kirsty Lamb and Gabby Newton landed a combined 26 tackles, and factoring in Blackburn’s 25 touches and Lamb’s 20, the Bulldogs realistically could not be stopped in or around the footy. For the Cats, their third quarter was highly successful not just because of their excellent pressure forcing the Bulldogs back, but also their ability to maintain possession of the footy under pressure. But it was a lack of access to viable ball inside 50, that was the real kicker, with the side only managing the one mark inside 50 compared to Footscray’s nine, with the sides measuring up virtually the same across all other major statistics. As for players, Amy McDonald (20 disposals, nine tackles, six marks) and Purcell (19 and five) were the go-to girls, while Bulldogs father-daughter selection Isabella Grant finally made her way out onto the park, putting the icing on the cake in her dad Chris‘ old number on debut.