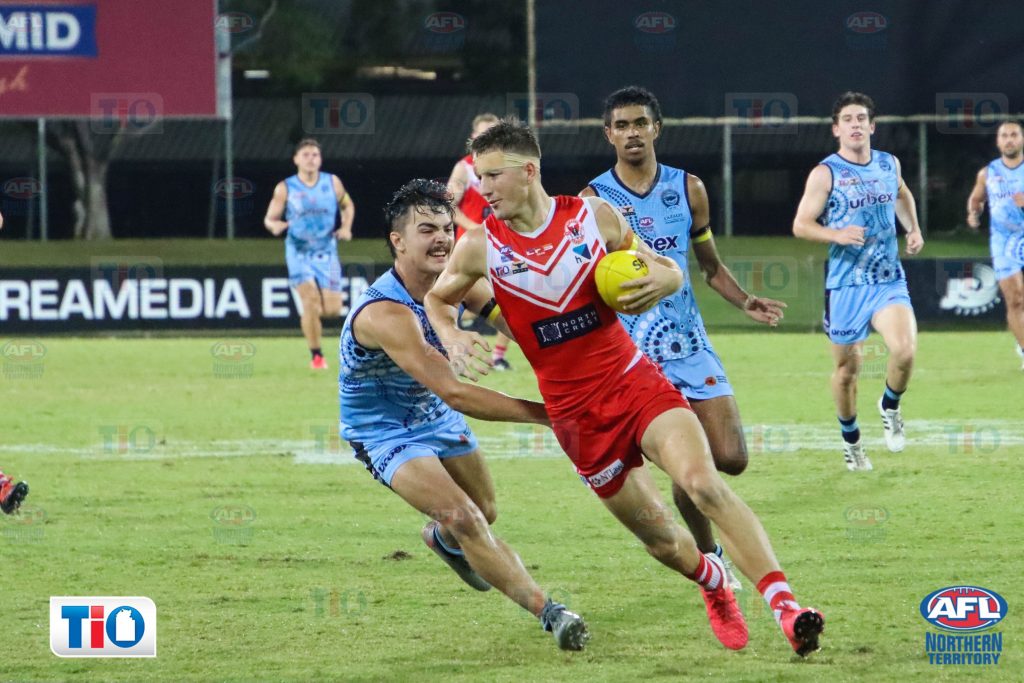 THE top five sides will likely be finalised in Round 17 of the Northern Territory Football League (NTFL) Men’s Premier League, with the minor premiership also in Nightcliff’s sights as finals time draws ever closer. Waratah and Darwin are the only teams within the finals spots set to face off this weekend, while the remaining postseason hopefuls will look to flex their muscle against lowly opposition. That, and more in our preview of the penultimate regular season round.

St Mary’s will look to strengthen its hold on a second finals chance when it takes on Tiwi at TIO Stadium on Saturday afternoon, with time running out for the Bombers to claim their first points in season 2020/21. The Saints have been one of the form sides of the competition lately and it has shown with nine wins in their last 10 outings. Conversely, Tiwi has been increasingly undermanned and outgunned since coming back from the break, tagged with an average losing margin of over 140 points in that time. This will be the third time these teams meet this season, presenting an opportunity for St Mary’s to complete a clean sweep. With an average winning margin of 65 points against Tiwi during this campaign, the Saints should have no issue putting their opponents away once again here.

Nightcliff has one hand on the minor premiership, with the opportunity to secure it and end Southern Districts’ finals hopes in one fell swoop presenting as the two teams meet at Norbuilt Oval on Saturday. The reigning premiers have been at their typical best this year and look to be roaring at just the right time, going undefeated in their last eight outings while also taking out their last two games by a combined 279 points. Districts have been the best of the rest among the bottom three with six wins and boast a surprise win over Nightcliff this season. The ledger between these sides sits evenly at 1-1, with this tiebreaker acting as a useful finals warm-up for the Tigers. That being the case, they should trump the Crocs, but cannot take anything for granted given their opponents’ recent inclusions.

Darwin and Waratah do battle in the weekend’s only top five clash, locking horns at TIO Stadium on Saturday evening in what should be a belter. The Warriors have been in hot form of late with two losses to St Mary’s the only blemishes on their record over the past nine rounds. After an inconsistent start to the campaign, they looked primed to challenge come finals time with a formidable squad on paper and their top stars aligning. Darwin has gone 2-2 since the Christmas break but looks like earning the final top five spot regardless of this result, pending Southern Districts’ efforts. Still, the Buffs’ fate remains in their hands should they win here. This is another matchup where the ledger sits even this season, though Waratah should bounce back to take this one out before they potentially meet again in finals.

Wanderers remains in the hunt for a top two spot and will hope to pounce on any slip-ups by taking out Palmerston at Cazalys Arena on Saturday night. Magpies coach Alwyn Davey will step down from his role as coach at season’s end, but his side has the chance to send its club legend off on a positive note and add to the two wins they have managed thus far. It will be tough if form is anything to go by, with Palmerston losing its last six games. On the other hand, Wanderers has rocketed into premiership contention this season and despite a couple of hiccups in its last five outings, will look to surge towards the postseason in style. The Muk Muks have beaten Palmy twice already this season by an average margin of 30.5 points, but should look to put an exclamation mark on this one.