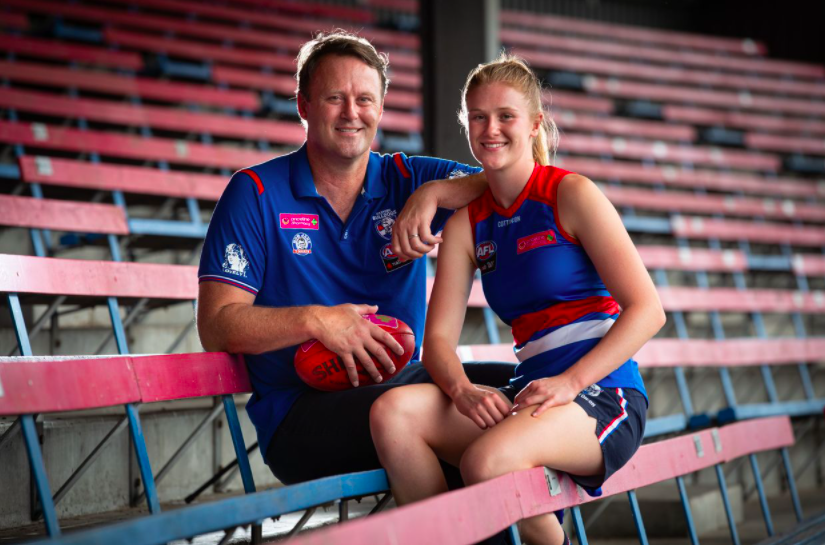 ROUND 3 of the 2021 AFL Women’s season sees two sets of undefeated sides lock horns to find out whose ‘0’ will go, while teams just outside the top six battle to emerge as finals threats. As was the case last time around, fixtures have been shuffled and one matchup – between Brisbane and West Coast – is on hold. But with a couple of mouthwatering clashes and one Victorian grudge match set to go down, there is still plenty to look forward to from this weekend’s action.

Note: All start times are local.

History will be made in red, white, and blue on Friday night as the Western Bulldogs’ first ever father-daughter selection, Isabella Grant makes her AFLW debut against Geelong at Kardinia Park. The daughter of 341-game Bulldogs champion, Chris missed all of her maiden season through injury, but comes into a winning side in place of the injured Bailey Hunt (calf). Her team will be sniffing out a positive record here, especially seeing that Geelong is currently bolted to bottom spot after losses of a combined 91 points.

The Cats have made a couple of changes, with the experienced Bec Goring called up to help bolster her side’s defence, while mature-age coup Nicole Garner also comes in for her senior debut. The pair’s additions come at the expense of youngsters Darcy Moloney and Georgia Clarke. Having lost handily to premiership fancy North Melbourne at home in Round 1, the Cats will be keen to make good on their advantage this time around and give fans something to cheer about.

The Bulldogs’ youthful exuberance and counter-attacking nature may pose some problems for Geelong, especially given the home side has only scrounged three majors in its first two outings. The Cats are also known for their young talent, but that has seen them fall away in lapses of concentration after positive periods. That could be a worrying factor if they don’t get up or stay level early, because we all saw how the ‘Dogs came back with force against Carlton last week.

Two sides coming off hefty losses will look to get off the mark for season 2021, when Greater Western Sydney (GWS) hosts Gold Coast in Blacktown on Saturday afternoon. The Suns were kept to the lowest-ever AFLW score (two points) last time out in a one-sided Q-Clash, which should serve as fuel enough for this game. GWS went down to somewhat a rival of its own in Adelaide last week, making this a clash between two winless teams in desperate need of a confidence boost.

An improved Suns forwardline saw hardly any of the ball last week, but showed in Round 1 that when given the opportunity, goals will come. GWS has also had trouble moving forward with its fluency on the ball – or lack thereof – underselling the dominance of Alyce Parker and Rebecca Beeson at the clearances. Whichever team can click into gear quicker and find its groove in the front half should coast clear for a much-needed maiden win.

Carlton faces a tricky must-win fixture as it rolls into Moorabbin to take on St Kilda on Saturday night, with both sides poised outside the top six. Touted as a premiership chance coming into the season, the Blues have stumbled in two surprise losses with short bursts from opposition sides hurting them in the long run. The Saints loom as another tricky test having beaten the Blues’ last opponent and remained competitive against North Melbourne a week later.

Perhaps mercifully, the Carlton looks likely to call upon the recently recovered trio of Lucy McEvoy, Mua Laloifi, and Gab Pound, who would all normally feature in the starting lineup. While McEvoy will prove another classy midfield choice, the latter two should shore up the backline. Sturdiness will be important against an improve Saints attack, spearhead by Caitlin Greiser.

The midfield battle will also be an interesting one, with the likes of McEvoy and Maddy Prespakis locking horns with in-form St Kilda jets Georgia Patrikios and Tyanna Smith. The hardened ball winning ability of Carlton’s pair against the classy running Saints should form an intriguing matchup of styles. Making the most of their impact will be key for either side, especially after their respective faults up forward thus far.

A mouthwatering contest between two undefeated Victorian sides goes down at Casey Fields on Saturday night, as Melbourne takes on North Melbourne. The Roos have been near-flawless across the opening two rounds; first dismantling Geelong on the road and then pulling away from the plucky St Kilda last week. Melbourne has found its grove after slow starts in both of its opening two fixtures, but now faces easily its toughest test to date.

While the Roos are renowned for their vast avenues to goal, Melbourne has proven somewhat of a surprise packet through its seemingly revitalised attacking nous. The engine room has played a big part, with Tyla Hanks slotting in seamlessly alongside Karen Paxman and Lily Mithen, but North is known to boss the ball and bat incredibly deep. A Kangas midfield quintet of Emma Kearney, Jenna Bruton, Jasmine Garner, Ash Riddell, and Ellie Gavalas has proven unbeatable across four quarters thus far, and will be tough to top.

The ruck battle will be another area of interest given how much class lies in either sides’ midfields, with Melbourne’s Lauren Pearce set to tackle an in-form Emma King. King, who has also rediscovered her scoring form, averages nearly double her opponent’s hitouts, but aide from rotating key forward Eden Zanker will likely even the contest up.

The round’s second top six clash sees Adelaide do battle with Fremantle at Norwood Oval, with the two undefeated teams battling to maintain their perfect records. Freo’s nine-game unblemished run has continued on from last season and while a tense derby only saw them get up by nine points with two majors on the board last week, the Dockers look every bit the premiership contender. Adelaide is right up there as well, emphatically returning to form in 2021 with the chance now to prove just how serious its flag tilt will be.

The Crows’ elite ball winners in Ebony Marinoff, Anne Hatchard, and Erin Phillips will be difficult to match, while the dynamic wildcard that is Chelsea Randall could prove a game-breaking factor in roles at either end. A heap of responsibility will fall on the shoulders of Fremantle’s Kiara Bowers in midfield, though a greater team spread up and down the spine is more the Dockers’ go.

It is no secret that Gemma Houghton poses a massive threat up forward alongside Sabreena Duffy, while Janelle Cuthbertson has been an absolute rock down back. With running power on the outer and many avenues to goal, Freo should have little trouble managing a winning score. Adelaide will again look to its midfield to fill out the scorebook, while the likes of Danielle Ponter, Ashleigh Woodland, and Teah Charlton loom as individuals who can break the game open.

A late fixture shuffle sees traditional rivals Richmond and Collingwood go head-to-head on Sunday afternoon, set to provide some nostalgia to fans at Punt Road Oval. The Tigers are still out to claim their first points in the competition having shown signs of improvement thus far, but ultimately fallen short of better opposition. Collingwood looms as another difficult test, currently holding up the top six with a perfect 2-0 record.

The two sides have not yet met in the women’s competition, making for a fresh start and opportunity for either team to grab bragging rights. Collingwood’s rejigged forwardline which boasts Chloe Molloy and Brianna Davey benefitted last week with the inclusion of Sarah Rowe, and will again be in good shape to overpower the opposition. Conversely, scoring continues to be a sore spot for Richmond despite the dominance of Monique Conti in midfield and promise of Ellie McKenzie on the outer.