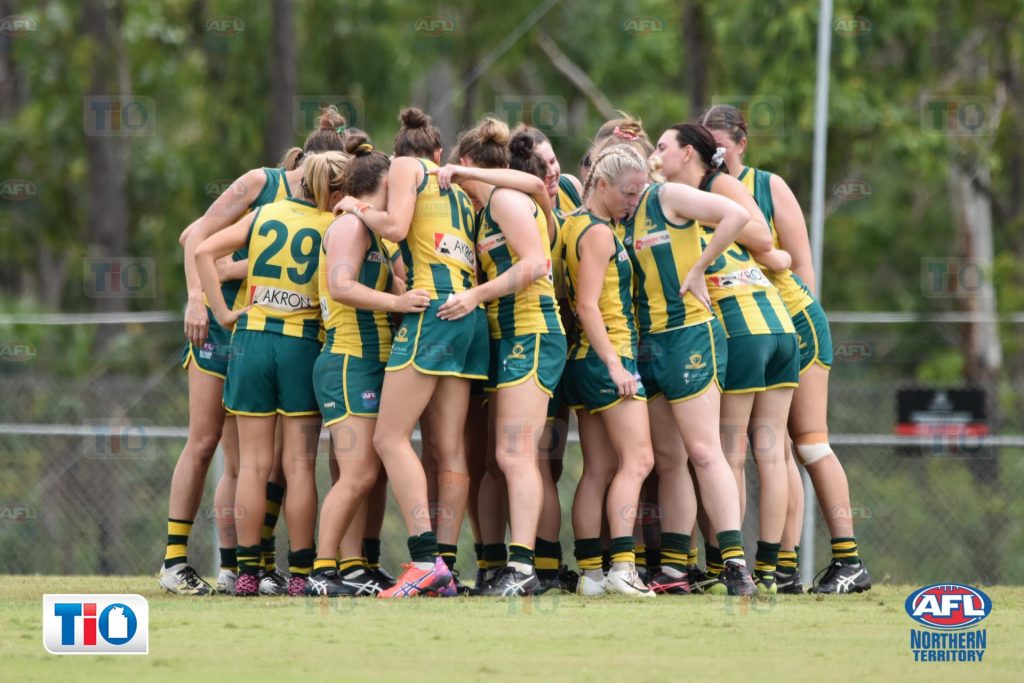 THE PENULTIMATE round of Northern Territory Football League (NTFL) Women’s Premier League action bounces down on Saturday, with all games spread out across the day and set to be played at four separate venues. A top-of-the-table clash between Pint and Darwin headlines the fixtures list, while Southern Districts’ meeting with Nightcliff serves as the sole other top five battle. That, and more in our weekend preview.

Nightcliff will be out to make its top five safety concrete when it travels to face Southern Districts at Norbuilt Oval on Saturday afternoon. The Tigers are two games clear in fifth with as many games left, with this clash against the fourth-placed Districts potentially serving as an elimination final preview. If the Round 8 meeting between these sides is anything to go by, we should be in for a belter. They were unable to be separated after a high-scoring affair in that instance, but face much different propositions seven match-days later. The Crocs have won six of their last seven games, while Nightcliff has lost thrice in that period and cannot climb any higher than its current ladder position. Still, plenty remains up for grabs – especially for the Crocs as they could advance their position with a handy percentage booster given St Mary’s (second) enjoys a bye.

Two sides in close proximity to each other on the ladder in Palmerston and Wanderers will be battling for consolation points on Saturday afternoon when they lock horns at Cazalys Arena. The Magpies have won just three games in season 2020/21, but that is still enough to put them eight points clear of their weekend opponents. With that factor, and a four-goal triumph over Wanderers in the back of their minds, the Magpies should come in confidently despite losing in six of their last seven outings. The Eagles have not tasted victory since Round 2, but have a couple of late opportunities to come away from this campaign with better memories and some bonus premiership points.

Waratah’s finals hopes hinge on securing victory in the final two rounds, starting with an away clash against the winless Tracy Village on Saturday. The Warriors sit two games outside of the top five and will be hoping that fifth-placed Nightcliff slips up at the death, with their slim postseason chances potentially decided this weekend. Tahs have been in good form since the break despite a 2-2 record in 2021, defeating teams below them but falling just short of top three opposition. Their 176-point drubbing of Tracy Village in Round 8 remains the biggest score and win of the season, meaning signs are ominous for the competition’s cellar dweller. With their entire campaign to play for, Waratah should come out firing in this one.

A top-of-the-table clash between Darwin and the undefeated Pint headlines Round 17, with the two sides set to provide a finals preview at TIO Stadium on Saturday. Pint is just two wins away from completing a flawless regular season and should come in the fresher side having enjoyed a bye last round. Darwin has won seven-straight games as the other form side of the competition, edging some stiff competition and feasting on the bottom sides. But the Buffettes’ last loss came at the hands of Pint in Round 8, with a thriller at DXC Arena decided by just two points. With revenge and confidence to be gained heading into finals, the Double Blues should be up for a terrific contest against the league’s benchmark team. The Queenants have risen to every challenge thus far though, so will be tough as ever to beat.