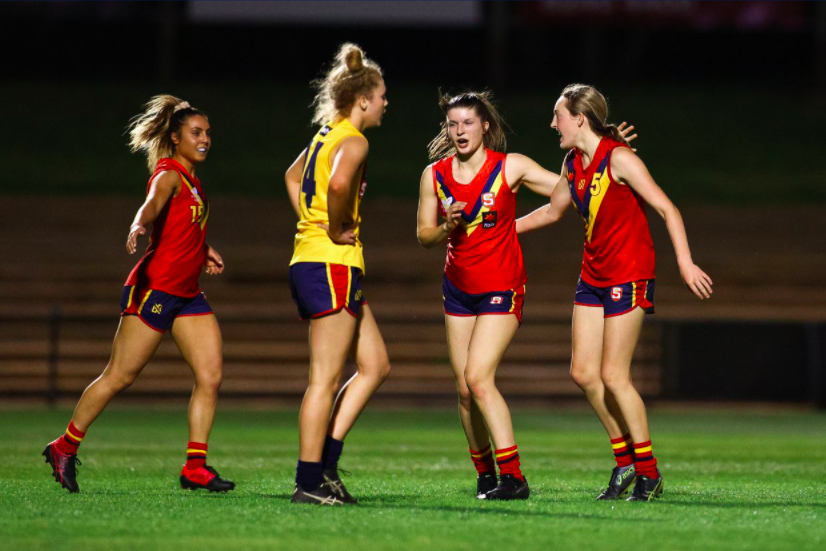 SOUTH Adelaide high-flyer Gypsy Schirmer is striving to become a more consistent player in 2021, with the exciting prospect now firmly on the draft radar after a breakthrough 2020 campaign. Schirmer’s X-factor and versatility helped her crack South’s senior lineup and her state’s Under 18 All-Star fixture last year, with inclusion in this year’s AFL Women’s Academy a richly deserved honour based on great potential.

The soon-to-be 18-year-old is known for her ability to play just about anywhere, but is looking to nail down a spot up forward while rotating through midfield. With outstanding athletic traits such as a sizeable vertical leap and swift closing speed, it was no surprise to hear Schirmer say she wants to “play more like” a certain iconic Carlton spearhead.

“It’s kind of a generic one but I think what Tayla Harris has, we share similarities,” Schirmer said. “We’re both tall players, but we both work really hard up and down the ground, and we’re quite dangerous wherever we play. “I want to play more like her.”

“I don’t really know (where my best position is), I’ve been thrown around a little bit. “I love the forward line, I really love the craft there and feel like I could really develop as a player but I’m also looking forward to developing my midfield abilities. “I got introduced to the wing last year which was a bit different but I really enjoyed it there too, so probably up forward and in the midfield is my best position.”

Perhaps much like Harris, Schirmer is also looking to more consistently showcase her talent having moved past interruptions and shaken off some injury concerns. Currently known as more of an impact player who takes full toll with each possession, the South Adelaide product also has eyes on a more grand end prize.

“I think (my goal) is just to play some consistent footy,” she said. “I have had some injury interruptions so getting some consistency, playing my role and getting to do what they want me to do at South. “Then progressing into this (AFLW Academy), playing some state footy and travelling if we’re allowed to, kind of progressing from there and if all goes to plan hopefully the draft at the end of the year.”

It has been a steep rise for Schirmer, who has only been playing football for four years. Having started out being coached by her father at Christies Beach Football Club, the youngster quickly made her way into representative squads and is now thriving under South Adelaide’s tutelage – with plenty more to come.

“I started footy four years ago,” she said. “I wasn’t really interested in playing with the boys so I waited until my local club got a women’s team, which was 2017 I think. “I was lucky enough to have my dad as my coach which was really cool as it made it easy to get driven to things.

“I started at Christies Beach Football Club down south and then got into the Under 15 state All Schools League. “I enjoyed that a lot, that was my second year of footy.

“From there started making more sides and play for South Adelaide women’s now, I’m really excited – we’ve got a good squad there. “I’ve had a few injury blows with my ankles that have kind of been screwing me up a bit but I’ve really enjoyed programs like this and hopefully I’m fit for a whole year and see what’s to come.”

With commitment to the game and pathway opportunities now at an all-time high, juggling football with studies amidst a pandemic has been admittedly “challenging” for Schirmer. With the transition to university in her sights, she says regaining a manageable balance will be an interesting prospect.

“I finished Year 12 last year so going in and out of school all the time depending on what the situation was, but also having to balance training and stuff like that, I feel like I did get quite a good training-school balance by the end of it,” she said. “But definitely with uni I’ll be interested to see how it goes.”

If preseason testing is anything to go by, Schirmer is ready to hit even greater heights in 2021 as one of South Australia’s most promising female draft prospects. Her next point of call will be in South’s hoops as they take on North Adelaide at Coopers Stadium, opening the season on February 26 in a grand final rematch.