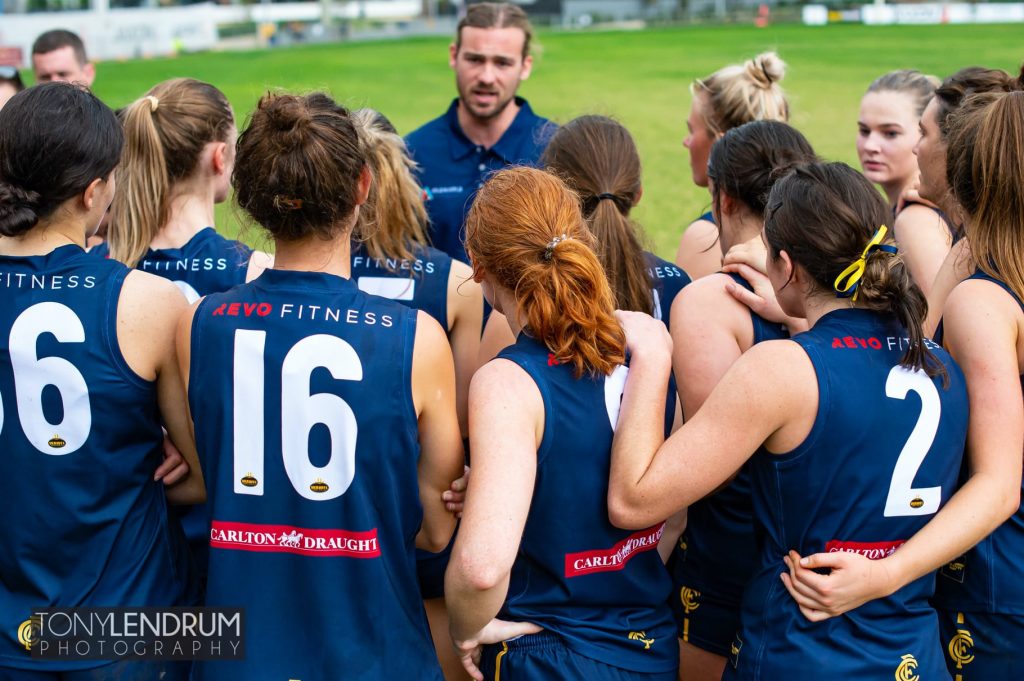 WITH a hugely interrupted 2020 season in the books, the Western Australian Football League (WAFL) Women’s returns on February 20, and Claremont Women’s are looking to step up their game from last season despite a shorter preseason in the books. Head coach Andrew Di Loreto  – who is also backline coach with the West Coast Eagles AFL Women’s side – is looking forward to the fresh start despite a couple of bumps along the way – including last week’s five day statewide lockdown – and is confident his side is prepared for a new season of WAFLW action.

“We had some areas we wanted to focus on in terms of evolving the way that we play. We’ve obviously got a bit of a shorter run up but with all that in mind I’m really happy with the commitment level and the development of our girls, I’m really keen to see them in action and obviously have a test and see where we’re at in a couple of weeks.”

While lockdown reduced training opportunities and preparation for the upcoming season, Di Loreto said that the priority was ensuring good habits were made and individual training expectations were met with just the one hour of exercise allowed per day, while the players’ mental health was also a big focus.

“I feel like we’ve been on a bit of a roll over the preseason, the vibe has been really good so it’s unfortunate that you know, you sort of break that good habit, but by the same token, we’ve taken it as an opportunity for the girls to obviously just abide by government regulation, and get their hour of exercise each day,” Di Loreto explained. “We’ve been touching base and checking in with them and making sure they’re in a good space and getting the hour’s exercise, but otherwise we haven’t been overly pushy with the five day lockdown when we’re just obviously waiting today to get final word that we can engage the girls as soon as we can and start to plan for the season in a couple of weeks.”

While Di Loreto has a defensive background, the Claremont coach says his side is building on “a really attacking brand”, with a mix of youth and experience making for an exciting squad.

“I don’t really want to be known as a defensive team even though that’s sort of my background as a coach,” Di Loreto said. “I think there’s strong elements that need to be present in a good team, in terms of defence, but if anybody’s watching Claremont Women’s play I’d hope they would be able to see that we take the game on and we’re an attacking team.”

“When the footy is in our defence, we want to be an aggressive defensive team where we know we take the game on from that position and, you know, in any other part of the ground.”

Despite a shorter preseason, Di Loreto remarked on the development of a couple of players who have really pushed themselves heading into 2021.

“There are a couple of girls who have stood out to me in the shortened preseason, our reigning best and fairest Sasha Goronova, I feel like she’s going to the next level, so she is 19, I think going on 20 this year, so I think she’s just really starting to come into her own,” Di Loreto said.

“Jessica Low is another one who I feel has been on the brink of putting herself in a really good position to get drafted and she’s trained really well, and probably the last one to mention is our captain Ella Smith, she’s just led from the front across the preseason with the standard that she applies herself and she was really strong for us in 2020, and I’m really confident she’ll be really strong again in 2021.”

Meanwhile, some 18-year-old talents are also on the rise, with Di Loreto pointing out the likes of AFLW Academy member Amy Franklin and Emily Bennett, with the duo coming up through the WA pathways into the league side again this season, and leading the charge as a number of talented 15 and 16-year-olds flood the Claremont Under 18s side.  Franklin will sit out a few weeks with a minor foot injury, but Di Loreto is confident the 180cm key forward is set for another solid season.

“She hasn’t been able to train fully to this point but someone like an Amy Franklin who’s in the AFLW Academy is probably someone to look for… Her injury is nothing more than a personal foot problem that she’ll be good to go in the next couple of weeks and I think she’s an exciting prospect I’d like people to know about, another one is a young lady called Emily Bennett, both girls only 18 years of age.”

“We’re really lucky our Under 18s has some young up and comers as well. Young, playing some league football at this point, we have a really strong 15 and 16-year-old group of girls. But they’re exciting for our club and hopeful draft prospects in the years to come.”

While the side’s 2020 campaign saw three wins and four losses, it produced a couple of draftees with young gun Bella Lewis and former West Coast Fever netballer Andrea Gilmore both getting the nod from the West Coast Eagles ahead of season 2021.

“We’re really proud of them. They worked really hard and we’re just a small part in their journey,” Di Loreto said. “At the end of the day, it comes down to the girls and what it really does show to our Under 18s girls is that this is real, and  someone like Bella Lewis who has literally just turned 18, you know, being drafted to West Coast, and only playing in the Under 18 system as recent as two years ago, and still being eligible last year but obviously being at the point of her development to play some league footy.”

Selected at pick three overall and pick one from the Western Australia draft pool, Lewis may not have played much of the 2020 season due to an ongoing ankle injury, but more than proved that her commitment and work-rate could propel her to the top level, earning a Round 1 AFLW debut.

“I think it just really shows our girls that that link and that pathway is there. You know, there’s no locked doors. They’ve put in the work and the opportunities will come. So yeah, it’s been really positive, we’re proud of those girls over the last couple of years that have gotten to that stage and fingers crossed we can continue that.

“From my point of view and our club’s point of view we just want to create an environment where they can be their best and hopefully unlock their potential and clubs at the next level see that and they get an opportunity.

“My goal is to empower the girls to be confident enough to take the game on in any position and understand whatever circumstance presents itself in any given game and then attack it from there.”