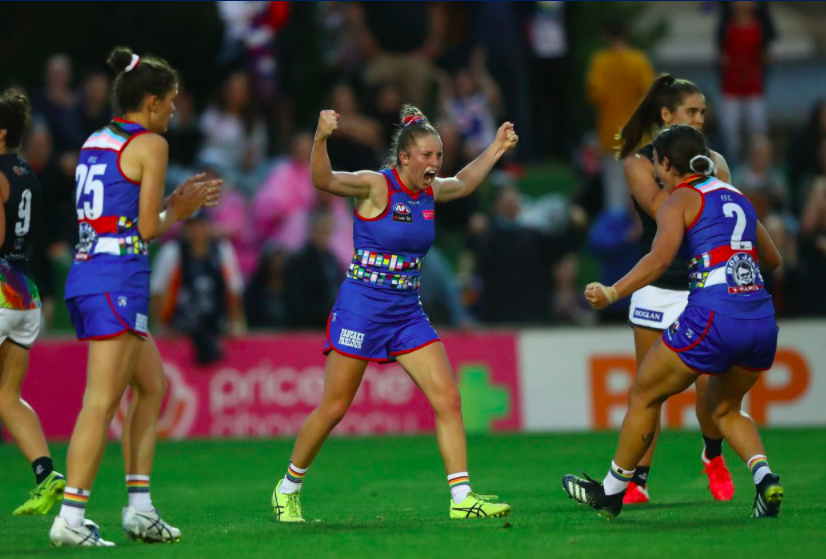 ROUND 2 of the 2021 AFL Women’s season got underway after some late fixture improvisation, with a number of fresh faces continuing to make their mark on the competition. We run you through how Generation W’s generation next fared over the weekend, focusing on the players under 20 years of age from the most recent draft crop.

The Western Bulldogs’ stunning upset win over Carlton brought some of the most promising young pups to the fore, none more so than Jess Fitzgerald. The number two pick pumped her side with a team-lifting goal in the second term, followed by her best double cobra celebration. Fitzgerald’s 15 disposals, four marks, and intensity inside forward 50 made her difficult to ignore for a Rising Star nod this week, a richly deserved honour for the Northern Knights graduate.

Sarah Hartwig was the other Bulldogs draftee afield, doubling her disposal output from last week with 10 touches and five marks. The defender set up well behind the ball and utilised her trusty left boot to send the Dogs into attack on the rebound. Carlton’s top draftee, Mimi Hill also had a good night at the office, finishing as her side’s second-top ball winner with 19 disposals – 16 of which were handballs. The winger provided good run and was typically handy at ground level for the Blues.

Both Collingwood and Geelong blooded fresh talent in their clash at Victoria Park on Saturday, building on the debuts handed to their respective draftees in Round 1. Geelong tall Olivia Barber stood out immediately, nabbing her first senior goal in unconventional style within the first minute of the game. She finished with six touches, joined by fellow debutant Stephanie Williams up forward. The Territorian had five touches and a couple of tackles, including a nice run-down effort early on. Darcy Moloney remained in the Cats’ lineup after cracking it immediately, ending with five disposals.

Collingwood also continues to put trust in its rising prospects, with Joanna Lin the latest first-year player to earn a senior gig. She joined fellow 2020 draftees Tarni Brown and Amelia Velardo in the Magpies’ winning side, though all three players were kept to under eight disposals. Undrafted free agent Bella Smith also held her spot in the Round 1 team, improving her output with seven disposals and two marks from defence.

Melbourne midfielder Tyla Hanks might have earned the second Rising Star nod in the end, but she had good competition for the honour on Saturday. Teammate Alyssa Bannan broke the game open against Richmond within a couple of minutes, booting back-to-back goals in the second term for her first major scores in senior football. Bannan’s former Northern Knights teammate Ellie McKenzie was outstanding in the yellow and black, finishing with 15 disposals and three marks as Richmond’s second highest ball winner.

The number one pick has quickly become arguably Richmond’s most impactful player behind Monique Conti, taking the game on along the outer with terrific speed and confidence. Back in the red and blue, Eliza McNamara backed up her excellent AFLW debut with nine kicks and four tackles, while Megan Fitzsimon also kept her spot and managed virtually identical stats to her first outing with five kicks, three handballs, and two tackles.

St Kilda pushed North Melbourne in a competitive outing at Arden Street Oval on Sunday, with prized draftee Tyanna Smith again impressing after her outstanding Round 1 performance. The 18-year-old again found the goals and collected 16 disposals, while also laying seven tackles for the Saints. Renee Saulitis was another opening round debutant to retain her spot, managing three touches in her second appearance. The Roos also maintained some youth in their squad, with their top picks Bella Eddey and Alice O’Loughlin building on their maiden appearances. Both players managed under six touches in the 26-point win.

Brisbane’s record-breaking win over Gold Coast proved an insightful telling of the Lions’ maturity and progression, while also laying bare the improvement to come from the Suns’ youthful side. 20-year-old Brisbane rookie Courtney Hodder was again outstanding for the victors, bringing her speed and line-breaking ability to the fore in an exciting 12-disposal performance.

Top Gold Coast draftee Annise Bradfield went down with what looked like a serious injury in the third term, rubbing salt into the wound of the 62-point loss. Maddison Levi laid six tackles to go with as many touches of the ball, with Daisy D’Arcy managing the same amount of disposals and Lucy Single collecting nine touches on a tough day for the inexperienced Suns.

Things did not exactly go to plan for top-end GWS draftee Tarni Evans on Sunday. Not only did the Giants go down by 47 points, but Evans faces a week on the sidelines after she laid a dangerous tackle on Ailish Considine. The 19-year-old’s driving tackle from behind forced Evans’ Adelaide opponent off the field, with Considine playing no further part in the game. Meanwhile, Crows young gun Teah Charlton was again promising up forward, notching another eight touches and laying four tackles as her side excelled in the front half.

A rain-soaked Western Derby hardly made for the best spectacle to showcase young talent, but there was a good amount of up-and-coming performers in action at Fremantle Oval as the Dockers won out by nine points. Freo draftees Sarah Verrier and Mikayla Hyde finished with nine and eight touches respectively, while star Eagles newbies Bella Lewis and Shanae Davison were kept to under half-a-dozen disposals each in the soggy conditions. Lewis still got her hands dirty, laying five tackles. Undrafted free agency coup Amber Ward built on her Round 1 showing, with the 19-year-old repaying the Eagles’ faith in her.