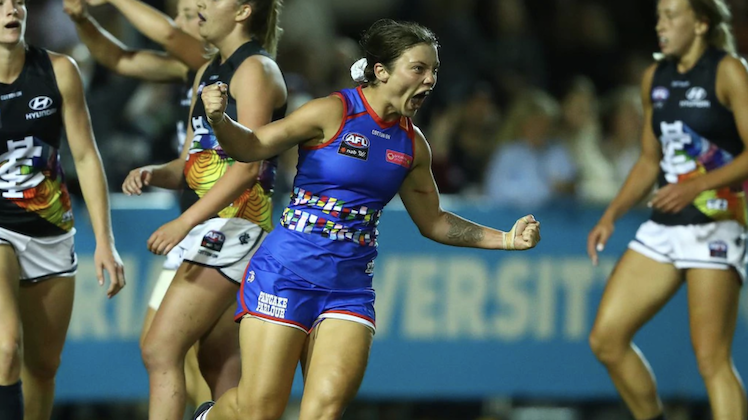 AFTER a heartbreaking Round 1 loss to St Kilda, the Western Bulldogs have bounced back to take a huge scalp by defeating title contenders Carlton in a massive Pride Round win. The Bulldogs looked down and out through parts of the match, particularly at the final break, but the inspirational effort from captain Ellie Blackburn saw the skipper drag her team over the line and win 6.6 (42) to 5.6 (36).

When the young Dogs needed a hero, Blackburn stepped up, kicking two majors in the final term, as Carlton had a lot of possession in the front half of the ground but could not muster up a score. They had looked good after leading at every break prior to the final term, with a three-point quarter time lead, five-point half-time lead and 10-point three quarter time lead.

Despite the Melbourne weather threatening to cause all sorts of havoc on the game, it was fitting that in Pride Round a rainbow emerged from behind the clouds, and provided hope for a Dogs side that just found a way to get off the canvas and muster a win. The home team also had to overcome an early injury to Bailey Hunt who went down with a calf injury and forced coach Nathan Burke to reshuffle the magnets.

There were no shortage of memorable moments in the match, such as Jess Fitzgerald‘s remarkable first goal after great work, and then a Kirsten McLeod running special into an open goal. Despite Tayla Harris finding her range – including a long-bomb, Carlton could not step up when it counted, and once again lost a game by a narrow margin.

The result means the Bulldogs move to 1-1 for the season, while the Blues ponder how they can capitalise when it counts. The year they made the AFLW Grand Final the Blues were 0-2 and found a way to get there, and Daniel Harford will need to pull out something special again in the nine-round season.