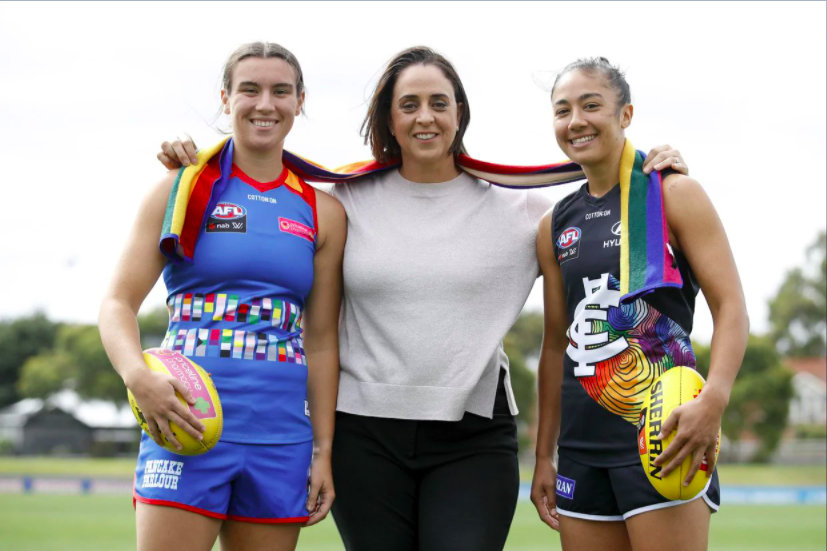 PRIDE is the theme of Round 2 in the 2021 AFL Women’s season, as the competition holds its inaugural Pride Round. The Western Bulldogs and Carlton, who have previously hosted annual Pride matches, will open the weekend’s action on Friday night as the remaining fixtures fall into place after multiple shake-ups. Remarkably, all seven games are set to go ahead in the rejigged round, with results as important as ever among the continual pandemic-produced unpredictability.

Note: All start times are local

Western Bulldogs and Carlton kick off Pride Round at Whitten Oval on Friday night, marking a historic and important event on the AFL Women’s calendar. Both sides remain searching for their first wins in 2021 after opening round losses, with a dreaded 0-2 start awaiting the team which goes down once again.

Bulldogs coach Nathan Burke has enacted four changes to the side which lost to St Kilda, with young pups Gemma Lagioia and Britney Gutknecht among the casualties. Carlton has been forced into just one change, as key defender Mua Laloifi misses through the updated concussion protocols and is replaced by Jess Edwards at half-back.

Laloifi’s absence may open the door for the Dogs to excel in attack, leaving Charlotte Wilson to shoulder a heap of intercept work against a forwardline spearheaded by Izzy Huntington. But the ball will have to get there first, with Carlton’s hardened midfield out to prove a point having been definitively blitzed by Collingwood in the second term last time out.

Tip: The Bulldogs are slowly finding their feet, but the Blues should come out firing after a shock loss. Wet weather will play a factor in the margin, Blues by 11.

A fixture shuffle has seen Collingwood and Geelong land each other in Round 2, with football returning to the Magpies’ spiritual home of Victoria Park on Saturday afternoon. The Cats are coming off a 62-point drubbing at the hands of North Melbourne, while Collingwood opened the season with an impressive upset victory over traditional rival, Carlton, making for very contrasting formlines.

The Magpies’ midfield was excellent last time out and a new-look forwardline featuring Chloe Molloy and Bri Davey looks poised for more success in 2021. One of the Cats’ best lines is its defence though, with skipper Meghan McDonald supported well by the likes of Maddy McMahon, Amy McDonald, and Millie Brown.

Collingwood will be without recruit Aliesha Newman after she was handed a one-week ban for her sling tackle on Carlton’s Laloifi, but the Pies’ confidence should be sky high nonetheless. On the other hand, Geelong will have to quickly pick up the pieces to recover here, especially after an impotent display forward of centre in Round 1.

Tip: Collingwood looks set to be one of the big risers in 2021 and while Geelong has potential, its young side will likely work in peaks and troughs. Another trough here for the Cats, Pies by 23.

Riding the wave of a Round 1 win, Melbourne hosts Richmond at Casey Fields on Saturday night looking to go two from two. Both sides took on Queensland teams last week but came out with contrasting results; as the Dees clicked into gear after quarter time to trump Gold Coast, while Richmond could only hang with Brisbane for a half before giving way in a five-goal loss.

The Lions may have uncovered a continued area of weakness for Richmond after tagging Monique Conti out of the first half, with Melbourne’s engine room typically an area of depth and prosperity. The Dees should again thrive in the midfield battle, though look for the likely tussle between first year jets Ellie McKenzie and Eliza McNamara to provide great entertainment on the outer.

Melbourne could quickly stake its claim for another finals berth should it string together some early wins, but the Tigers have shown signs of improvement and will hardly go down easily. Still searching for their maiden AFLW win, the Tigers have plenty to play for and will hope to avoid being the league’s cellar dweller for a second year running.

Tip: Melbourne looks a side determined to keep touch with the true premiership contenders, but cannot be caught lacking against the hungry Tigers. Still, the red and blue side should be too good all around the ground, Dees by 27.

North Melbourne will be out to build on its formidable early form, if possible, when St Kilda rolls into Arden Street Oval for their Sunday afternoon clash. The Roos set a high ceiling with their maiden 2021 performance, which yielded the greatest opening round percentage in AFL/AFLW history. St Kilda is also in winning form, though having shaken off the Western Bulldogs in Moorabbin.

It is no secret that North Melbourne bats a ridiculously deep midfield, boasting arguably the most damaging brigade of ball winners in the competition. St Kilda’s young pair of Georgia Patrikios and Tyanna Smith will do their best to match the forward run-and-carry of North’s prime movers, especially after such promising showings last week.

North Melbourne has plenty of avenues to goal, with rotating ruck Emma King back to her scoring ways after three goals last week, while the Saints also showed they will not be entirely dependant on spearhead Caitlin Greiser to kick a winning score. Matching the Roos’ firepower will be tough, but could be manageable depending on the conditions and North Melbourne’s mood.

Tip: St Kilda will likely provide a much greater test for North and should stick with them in patches, but do not quite have the stock to go with a switched-on blue and white outfit for four quarters, Roos by 21.

The second-ever AFL Women’s Q-Clash is set to go down on Sunday afternoon, as the Lions and Suns meet at Hickey Park having initially been poised against Victorian opponents. The makeshift fixture should provide fireworks, with last year’s inaugural all-Queensland dig ending in an enthralling draw, meaning bragging rights are well and truly up for grabs here.

Brisbane will look to replicate last year’s early run of form with a second win on the trot, while Gold Coast is still out to open its account for the season after an opening round loss to Melbourne. Both sides boast some terrific young talent, with the Lions’ Isabel Dawes fresh off a best-afield performance, and Gold Coast’s Kalinda Howarth hungry to hit the scoreboard after a goalless outing last week.

The experience is also there, headlined by Brisbane’s strong foundation crop – which may soon be bolstered by Jess Wuetschner – and opposed by Gold Coast’s new-look forwardline, which features vice-captain Sarah Perkins. Jamie Stanton and Alison Drennan will have plenty to do in midfield against the Lions’ strong ball winners, making for an intriguing clearance battle.

Tip: You can never count the fighting Suns out, especially with their youthful exuberance, but the Lions look a slight step ahead and should come away with bragging rights over their neighbours. Lions by 10.

GWS is back home after a well-travelled preseason, set to host Adelaide at Blacktown International Sportspark on Sunday evening. Both teams were thrown into isolation after Round 1 and have undergone improvised solo training sessions for most of the week, which will inevitably show in how either side adjusts to the disruptions thrown their way.

Adelaide looks like quickly returning to its fearsome best in 2021, with the Crows’ many stars aligning to win big las week. Erin Phillips will hope to again take hold as she gets a clean run at it, while some added dynamism in the potential moving parts of Chelsea Randall, Ebony Marinoff, and Sarah Allan will give GWS plenty of headaches.

The Giants have showcased their fighting spirit and have the experience to give the Crows a good run here. An even five-goal loss to Fremantle in Round 1 was less than ideal on a pure results basis, but some strong contested work in the first half should put GWS in good stead to compete against top sides, like Adelaide, for periods of time.

Tip: Revenge will be in mind after GWS ended Adelaide’s finals hopes last year, and the visitors should have too much grunt going forward from midfield. Crows by 26.

The Western Derby is on in Round 2 after last-minute confirmation of the bout came today, with Fremantle and West Coast set to lock horns in the weekend’s closing fixture. Akin to players in the Adelaide-GWS clash, both teams have been limited training-wise with just an hour of exercise permitted under Western Australia’s lockdown laws.

Freo looks every bit the powerhouse last year’s undefeated run suggested, maintaining their winning streak with a powerful Round 1 victory. West Coast looks an improved side despite falling well short of Adelaide in the end. While the Eagles managed 2.6 (18), the Dockers excelled with 8.10 (58) in their opening fixture.

That immense gap in scoring should again prove telling, with Fremantle’s dynamic and game-breaking forward movers in Gemma Houghton and Sabreena Duffy difficult to keep down, especially as Kara Antonio and Kiara Bowers move the ball forward with class from the outside and inside of midfield.

Tip: Fremantle has the early bragging rights in this rivalry and will likely continue to hold as much after Sunday’s clash. With too much going forward, Dockers by 40.