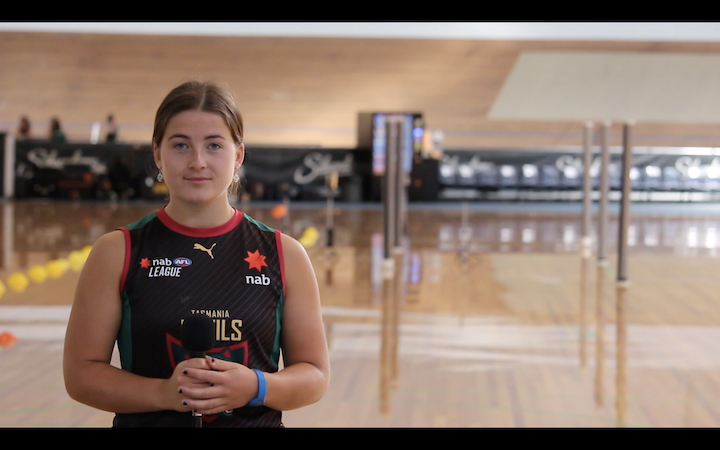 AFTER injuring herself at the start of her middle-age year, dual-sport athlete India Viney is hoping for a clean run. Not only is she hoping to have some luck in 2021, but put her best foot forward to help the Tasmania Devils pick up a few more wins than in their maiden season, regardless of the on-field role she plays.

“I’ve been playing football for three seasons now and absolutely loving it,” Viney said. “I came from basketball in the state development program and then one of the girls, Jemma Blair who’s here today actually said ‘come along let’s have a bit of a game in juniors’ and I ended up sticking it out and I’m absolutely loving it.”

Having been more than capable to play either sport, there was an intrinsic pull to the oblong-shaped ball game and Viney said the “culture” was something special amongst women’s football.

“Definitely the culture and all the girls getting around each other as it’s a fairly new sport for women, and it’s quite empowering and makes you feel very confident about yourself,” Viney said of what made her fall in love with the sport.

Her long-term goal is to “play at the highest level that I can as an individual” and said former Tasmania Devils’ star and now North Melbourne AFL Women’s midfielder, Mia King was a key inspiration through her journey.

“She (King) is one of my good friends from home, so we went to the same school, had a mutual friend and became close friends, did a few things together,” Viney said.

Being a smaller player, Viney enjoys applying pressure to the ball carrier and is willing to do whatever it takes to get her team across the line through second and third efforts.

“(My strengths are) definitely heat around the ball and I love playing that defensive role and really going all out and trying to nail down that target and just make sure that our team has possession,” Viney said. “And always just doing that density thing we do with Tassie Devils, so it’s great.”

As for her improvements, it was all about getting a clean run and then taking it one step at a time to chase the ultimate goal of following in King’s footsteps to make it to the AFL Women’s competition.

“Definitely not injuring myself at the start of the season, and just really focusing on trying to get a game and sticking out in the squad and trying in future, I’d love to play at the highest level because I love the competition that the game brings,” Viney said.

While individual aspirations are one thing, Viney’s main focus was having some success with the Devils this year in the NAB League Girls, even if she not in the team.

“I’d love the team to win, just Devils doesn’t matter if I’m playing or not,” Viney said. “Just see them get up there in the finals and come from last season as the underdogs and just really rule the competition so that would be great.”