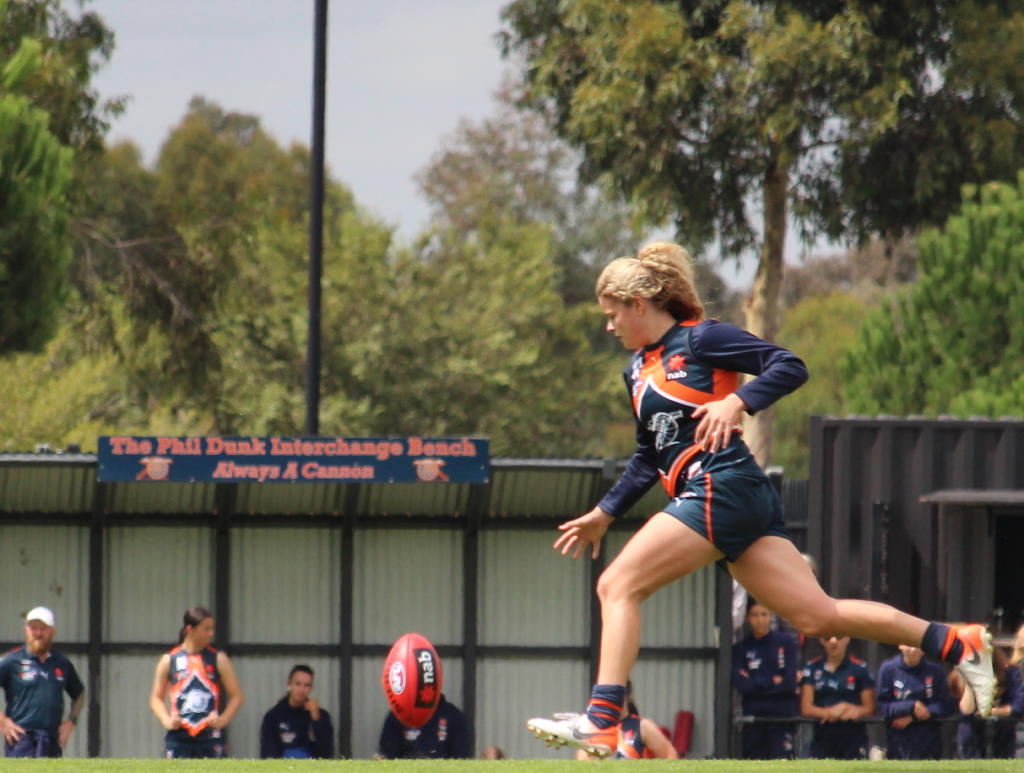 THE CALDER Cannons are one of many NAB League regions adapting to new circumstances ahead of the fast-approaching girls season, but are “taking every training session in their stride” according to newly appointed regional talent operations lead, Matthew Burton. Now overlooking both the boys and girls programs along with coach Ross Smith, Burton says the girls program is in good shape less than a week out from season proper.

“They’re starting to look fantastic,” Burton said. “The preseason has been a little bit different, we haven’t had as much contact as we would’ve liked (compared to) previous preseasons. “It’s been a bit shortened… but everyone’s just made the best of the situation that we had, that’s what it’s about.

“We want to be the best at doing things differently and the girls have really adapted to that. During the last week of training, they’re just starting to ramp it up and we’re looking forward to games because they’re starting to look really strong. “We’re really excited about our group.

“We’re trying to (integrate) as much match simulation into our training as much as we can, especially with the with the restrictions on time and also what were able to do in terms of practice matches. “Hopefully we’ve got a really good base leading into round one next Sunday.”

While each region has been forced into somewhat of a scramble as a result of the pandemic-induced climate, Burton was glowing in his praise of former female talent coordinator Russell Humphrey, with the list and standards built over a number of years now in a great position to prosper. Amid an extended role, Burton says the female talent has been “a breath of fresh air.”

“We’ve got a really great group of girls on our list, we’re really strong. There wasn’t too much turnover from last year to this year and we’ve been able to bring in some girls in a variety of age groups.

“We’re really strong in that 17-year-old group, our 18-year-old group is fantastic, and we’ve got three 19-year-olds that are on our list at the moment that are really driving the standards and have been able to train at Essendon at VFLW level, so are learning a lot.

“Hopefully a few get their name read out at the end of the year, which is very exciting part and what you work for, but I reckon our list is looking really great. It’s really exciting and we’re really looking forward to working with them across 2021.”

Looking down the list of names in Calder’s squad, one in particular pops off the page. 2019 NAB League best and fairest, Georgie Prespakis (younger sister of Maddy) is already among the most highly touted juniors gunning for this year’s AFL Women’s draft, but is one of many top-agers in the mix from this prosperous region. Despite the allure of big names and star individuals, Burton maintains that the squad is great “from one down to 35.”

“Georgie’s a prodigious talent,” he said. “We really enjoy and get along with Georgie really well and we know what the level of her football is, so we’re just really looking forward to working with her and the areas that she thinks she needs to improve on to get herself ready for what might occur at the end of the year.

“We’ve got a lot of great personalities… we’ve got a really great group from one down to 35. “They all bring an aura of enthusiasm and passion, they look to motivate each other and get along really well. There’s some girls at the top but yeah, we’re definitely one to 35 through our list.”

A few typical preseason niggles aside, the Cannons are set to be fit and firing in Round 1 with no major setbacks, while the leadership roles are also to be confirmed this week. Calder’s first point of call this season comes against a tough Sandringham side on Sunday February 7 at Highgate Recreation Reserve.