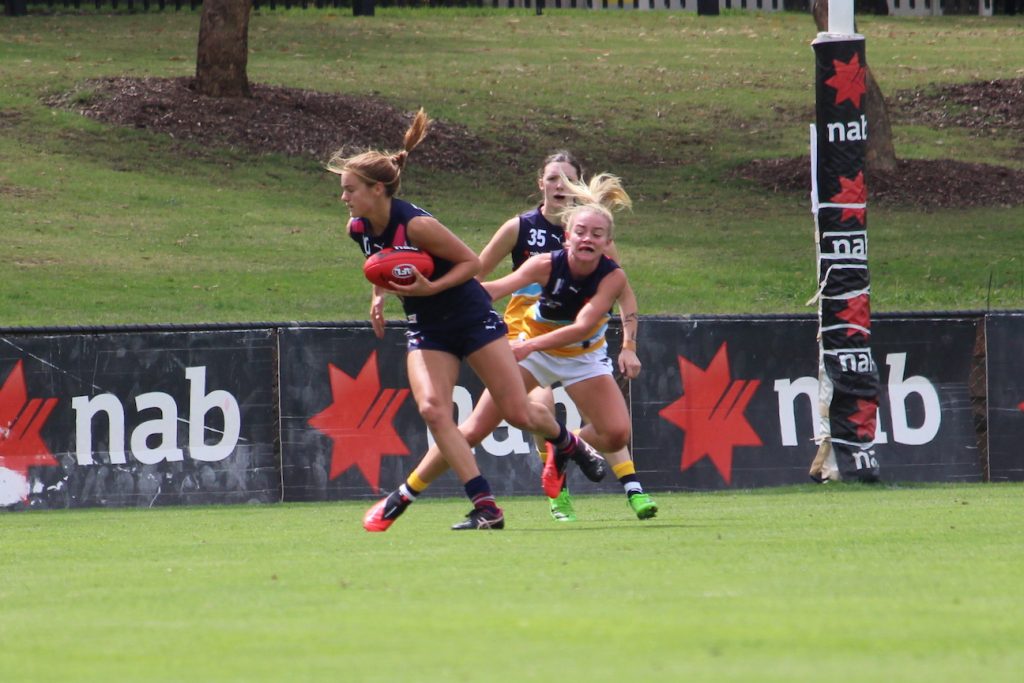 THE SANDRINGHAM Dragons are gaining confidence out on the track as their preseason hots up, less than a week out from the beginning of season proper. New talent pathways coach Jackson Kornberg is now overseeing both the boys and girls program having been a long-time assistant, and says his troops are in a “good position” in terms of fitness, skill, and cohesion ahead of Round 1.

“We’ve had our two intraclub games and we’ve settled on a final list,” Kornberg said. “I think off the back of our intraclub last (Wednesday) night, it gives me great confidence that the girls are in a good position fitness-wise. “I think that’ll come throughout the year, you get fitter every time you play and every NAB League club’s been in the same boat.

“I’ve been quite impressed from a skill point of view and from a team cohesion point of view as well. “I think it comes back to what the (coaching) team did last year in getting the group together and buying into Dragons footy.

“The great thing with this group is that we brought back essentially the list that we had last year and we and we brought in a couple of girls from outside who we identified through a relationship with local clubs and schools as well… (former coach) Tam Hyett and the coaching staff did a tremendous job with the girls last year from a coaching and development point of view.”

A gradual build-up during preseason sees the Dragons now ready to face true opposition for the first time in almost a year. While a short schedule ahead of the 2021 season meant no practice matches were played, match simulation and intraclub hitouts eventually took over from pure craft development.

Kornberg says there is still more learning to do throughout the year, but players and staff alike are just looking forward to getting back into competitive games.

“Pre-Christmas we primarily did a lot more individual base-craft stuff and a lot more skill development work,” he said. “As a new coaching staff we had to get to know the girls and know where they’re at. “I think it’s important as a NAB League (club) anyway to push that development, which we do a heap of.

“We’ve ramped into intraclubs over the last two training sessions and then into some match-sim next week, but we’ve gradually built it up so that throughout the season, we can just drip feed and add things as opposed to loading them all up before Round 1 and hoping for the best. “I think it’s really important with such a small amount of time to prioritize and then add value-add throughout the year.”

“We’re all just looking forward to getting a game in, the girls got the three games in (last year) but it’s still been nearly 12 months since they played a competitive game. “The coaches mentioned after training other day, when we have a look at the team we’re just really excited to see how we go because I think it’s an unknown at this point.”

An even spread across the age groups is a facet of Sandringham’s squad that has Kornberg pleased about the potential for progress in years to come. The incoming senior coach was also glowing in his detailing of the girls’ willingness to learn and implement what they are being coached at training. With the strength of the squad lying in its skill and ability to transition the ball, Kornberg says his troops have been playing to those assets thus far.

“For me (our strengths) fall back on the skill component,” he said. “We’re not going to be overly tall side, which I don’t mind – if you’re a well skilled team and you can run the ball, I don’t think it really matters when you’ve got a versatility across all lines.

“When we translate to games, our ability to move the ball from back 50 to forward 50… from that we’ll hopefully see a lot more ball on the outside to try and use that use that skill, use that speed, use that endurance a lot of our girls have, and then their foot skills to the move the ball.”

“I think the beauty about us is that we’ve got a real split across the ages. “We’re not heavily concentrated in one certain area, whether it be age 19, 18, or 17.  “We’ve currently got three 19-year-olds on our list and then we’ve got that core group of 18 and 17-year-olds which will be fantastic moving into 2021, but then also into 2022.”

A few standouts have already emerged too, with 2020 form and preseason shape ultimately the two factors to go off. Kornberg ran through a core of names who will put their hands up for draft contention this year and in 2022.

“Kiana Lynch, her training throughout the preseason has been really solid as that draft age player,” he said. “It’s likely we’ll see her sort of playing those running midfield/winger sort of positions throughout the year. “She’s got a lovely kick, her running is really solid and I think she’ll really impact in that front half.”

“Charlotte Ryan is someone who’s really sort of jumped out this year. “Going into the intraclubs we liked her speed and she’s able to get the ball and take ground. “She she really challenges the tackler and challenges the defence to chase her.”

“Another one who has really excited us in the intraclubs as well is Pia Staltari. “She’s played a number of different positions, but I think her role we’ve settled on is that that high half-back. “She reads the ball well and is probably one of the better sort of anticipators in our team, she’s got a really long nice penetrating kick as well.

“As far as from a from a draft age position they’re they the girls I’ve been really impressed with over preseason. A number of other girls I suppose as well are going to jump out throughout the year, but from the preseason we’re really happy with them.

“Then from a 17-year-old point of view, we’ve got some we’ve got some girls who have really been exciting through our preseason too. “Bridie Hipwell is one who, from a training point of view, her professionalism is terrific. We’re lucky enough to have Bridie in our girls program and then Darby, her older brother who’s in the boys program as well… but mostly playing through the midfield, she’s got a lovely kick, her speed and agility really are strong too.

“Sophia Hurley will be another one as well as a 17-year-old. Her pace and her ability to keep the ball as one of the better kicks in our team is impressive. She has that ability to brake lines and really move, she’s probably one of pur better runners as well.”

The Dragons are set to take on Calder Cannons at Highgate Recreation Reserve on Sunday February 7, making for a tough opening fixture. The nine-round NAB League Girls season is set to bounce down a day earlier, with three of the six first-round fixtures taking place from 12pm, onwards.