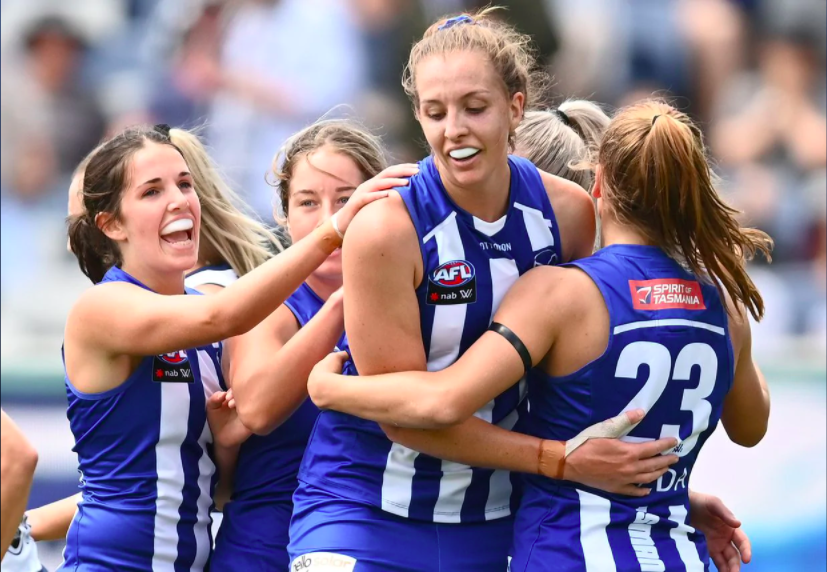 NORTH Melbourne sent an early statement to the rest of the competition on Sunday, romping to a mammoth 62-point win over Geelong at Kardinia Park. The Roos took little time to establish their dominance as tall forward Emma King booted three majors in the opening term, setting a strong platform for the 11.5 (71) to 1.3 (9) victory. The result made for North’s largest-ever winning margin, and sets a new record for the highest Round 1 percentage in AFL/AFLW history.

The hardened Kangaroos outfit proved too big and strong both around the ball and up forward for a youthful Geelong side, seeing them accelerate in each term and form a formidable lead. Having been held scoreless for the first three terms, the Cats got on the board early in the final quarter before veteran ruck Aasta O’Connor booted her side’s lone major of the game in the dying minutes.

Along with King, second year forward/midfielder Ellie Gavalas chimed in with three majors of her own, while league best and fairest chance Jasmine Garner snared two to go with 18 disposals. Isabella Eddey had a debut to remember as she also found the big sticks, manufactured by some fearsome work from Daria Bannister as the play unfolded. Emma Kearney (22 disposals), Ash Riddell (20), and Jenna Bruton (19) were typically productive around the ball and far too polished on the attack for Geelong’s lineup to maintain.

Superfluous to say, most of Geelong’s biggest contributors were stationed in defence, with youngster Amy McDonald starting her season on the right foot with an 18-disposal effort. The 23-year-old was a cool head in Geelong’s defensive crisis, but could only do so much on the counter as the ball consistently found its way back. Skipper Meghan McDonald had a tough job on her hands among the undersized and under-siege backline but fared well, while star midfielder Olivia Purcell picked up from where she left off with 17 touches and seven tackles.

The Cats face another tough ask in travelling to face Brisbane next Sunday afternoon, as North Melbourne returns to home base to take on fellow Round 1 winner, St Kilda earlier on the same day. While one side looks every bit the premiership contender, the other will be licking its wounds after a harsh opening to season 2021.

Brisbane opened its account for season 2021 at the first time of asking, shaking off Richmond after half time to secure a 29-point win on the road. In the first ever AFL Women’s fixture held at Punt Road Oval, the Tigers’ homecoming was spoiled by Brisbane’s three-goal to nil second half which set up the 5.11 (41) to 1.6 (12) final scoreline.

As expected on the back of its concession-aided recruitment drive, Richmond made noticeable improvements after a winless maiden campaign and was only a goal adrift at the main break. It came after Brisbane utilised the scoring end well in the opening term, gaining good early momentum through its control of the engine room and typically sturdy defensive structure in the face of Richmond’s quick ball movement.

While it was hardly a case of the floodgates being forced open, Brisbane prettied up the scoreboard nicely with a closing effort beyond the years of its young squad, all while keeping the Tigers goalless after half time. Courtney Wakefield‘s second term major from the goalsquare proved her side’s lone goal for the game, as skipper Katie Brennan could only manage a hat-trick of behinds.

Gun Richmond midfielder Monique Conti was contained well by Cathy Svarc, who collected nine of her 10 touches in the opening half, while Gabrielle Seymour led the Tigers’ count with 16 disposals. Under-the-radar recruit Harriet Cordner was also terrific down back in the losing effort, while number one draft pick Ellie McKenzie showed promise on the outer in her AFLW debut.

For the Lions, 19-year-old Isabel Dawes looks a big improver having notched a career-high 21 disposals, leading all comers for the day. Nat Grider is another in that boat as she gathered 16 touches from defence, while Emily Bates and Sophie Conway were not far behind from midfield. Greta Bodey was the game’s only multiple goalkicker with two, as speedy debutant Courtney Hodder managed 1.2.

The Lions will be looking to form an early winning streak as they carry their momentum back home ahead of hosting Geelong at Hickey Park, while Richmond is set to take on Melbourne at Casey Fields in what looks like a tough assignment – if Round 1 results are anything to go by, at least.

Fremantle’s undefeated streak and dominant home record extended into 2021, as the Dockers accounted for a spirited GWS side by 30 points at Fremantle Oval on Sunday. It was a game of great emotion, most significantly for those in charcoal and orange as they commemorated inaugural Giant, Jacinda Barclay, who passed away in October last year.

The travelling team was largely competitive in the early stages, trailing by just five points at each of the first two breaks. But Fremantle’s smothering tackling pressure, dynamism and searing run forward of centre proved too much to handle after half time, with the 8.10 (58) to 4.4 (28) result coming thanks to the Dockers’ five-goal to three second half.

The forward wombo combo of tall Gemma Houghton and small Sabreena Duffy again worked wonders for Freo, with the pair both snaring three goals in scintillating displays. Houghton came to life after the main break to find all of her three goals as the game opened up, with her dual threat of pace and aerial presence a true handful. Duffy was also menacing inside 50, displaying her rare goal sense.

Ever-consistent midfielder Kiara Bowers will again be a key feature through midfield as she amassed a team-high 21 touches, partnered well by Jasmin Stewart on the inside while skipper Kara Antonio bossed the outer. Alyce Parker returned a stellar display for the Giants with 28 touches, a game-high tally matched by teammate Rebecca Beeson.

GWS is booked to face West Coast at Norwood Oval next having escaped Western Australia in time before the state’s proposed lockdown period, while Fremantle has fellow opening round victor, Adelaide next on the agenda at the same venue.