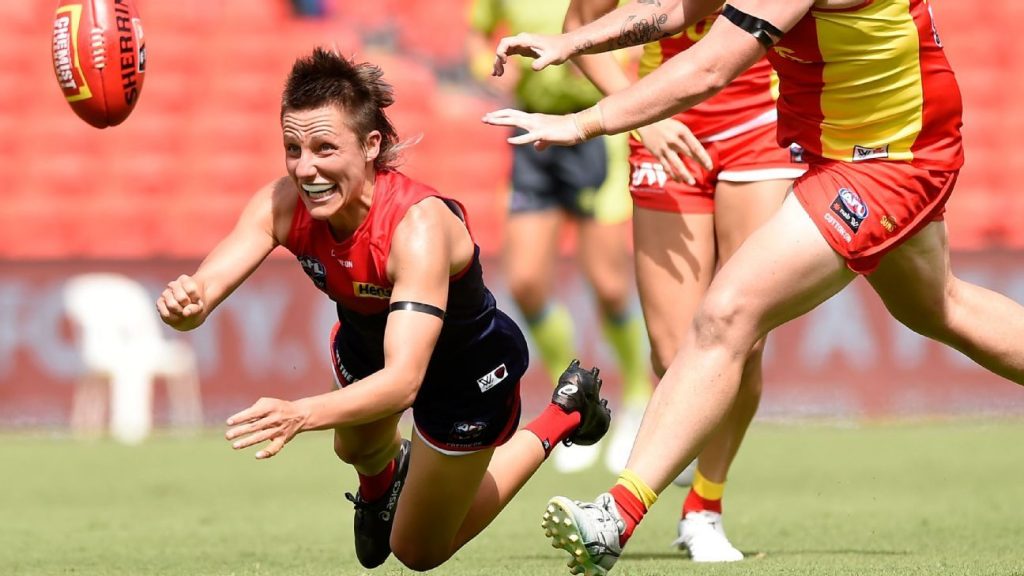 MELBOURNE Demons have opened their season with a win on the road, toppling Gold Coast Suns by 21 points at Metricon Stadium yesterday. Led by a dominant duo of Karen Paxman and Lily Mithen, the Demons started slowly but recovered to win, 9.2 (56) to 5.5 (35) in front of more than 1900 fans.

The original fixture had the Demons at home against Adelaide, but despite the Sunshine State being a fair distance from Casey Fields, Melbourne was determined to make it a home away from home. It did not look that way early when Jamie Stanton converted a goal in the first 30 seconds of the match. Six minutes later and Leah Kaslar had the Suns’ second and the margin was out to 12. It took until past the midway point of the quarter before known goalsneak Kate Hore finally put through a major, and when Tegan Cunningham converted her first of the 2021 season, the scores were level again. A strong pack mark from Gold Coast recruit Sarah Perkins in the dying seconds of the term resulted in her new side taking a seven-point lead into quarter time.

The second quarter belonged to the visitors though, as Melbourne piled on five goals, starting with an Eden Zanker major in the opening minute of the term. Krstel Petrevski and Shelley Heath provided spark at ground level and brought up their first goals, while Cunningham kicked another and when Hore converted her second in the final minute, Melbourne was out to a 22-point lead at the main break. Petrevski became the third multiple goalkicker with a major six minutes into the term, which meant the Demons had kicked 6.1 to 0.2 since quarter time, turning a seven-point deficit into a whopping 28-point lead in just 26 minutes of action.

Brittany Perry finally broke the drought for the home side a couple of minutes later, only for Mithen to counter with another major for the red and blue. Perkins kicked her second to prove her worth as a target inside 50, but despite their best efforts, the Suns had only shaved the half-time deficit by one point to 20 at the final change.

Needing a miracle, Leah Kaslar had a chance but missed, and in what was an anticlimactic finish – though more than suitable for Melbourne – the teams only managed the one behind apiece in the final term for the siren to sound with Melbourne winning 9.2 (56) to 5.5 (35).

For the most part it looked like Paxman might rack up a record with 19 disposals at half-time, to finish with 25, as well as three marks and four tackles, while Mithen picked up 22 disposals and two marks to go with her goal. Tyla Hanks and Eliza McNamara battled above their heights to pick up 18 touches and lay six tackles between them, with McNamara’s debut one to remember. Jacqueline Parry (17 disposals) and both the Pearces – Daisy and Lauren – were also impressive, racking up 15 touches.

The Suns had a number of impressive players, with Stanton leading the way thanks to 18 disposals, three marks, two tackles and a goal, while Alison Drennan had 17 touches and nine tackles. Bess Keaney starred on debut herself with 15 disposals and six tackles. Looking ahead to Round 2, Gold Coast travel to Victoria Park on Saturday for an afternoon game, while Melbourne hosts Richmond at Casey Fields in the evening game.

Phillips and Randall lead the Crows to a winning start

Adelaide has produced a dominant second half to run away convincing 38-point winners against a young West Coast side at Mineral Resources Park. Premiership superstars Erin Phillips (23 disposals, five tackles, five marks, two goals) and Chelsea Randall (19 disposals, three marks, three tackles) led from the front and were a class above throughout the contest. Once numerous other premiership Crows stepped up in the second half, the Eagles struggled to get the ball into their forward 50 and could not overcome the Crows’ immense tackling pressure.

Chelsea Biddell gave her side a strong start when she collected the ball cleanly in congestion and kicked the first major of the match from 30-metres out. Draftee Ashleigh Woodland followed this up by kicking a nice snap goal with her first kick for the club, which was one of many impressive signs she showed on the day. Captain Randall, who missed the entire 2020 season with an anterior cruciate ligament (ACL) injury, started the game at half-forward and made an immediate impact by providing a focal point for her side and continually moving the ball forward. West Coast’s quarter went from bad to worse when Brianna Green exited the field with an ankle injury after a heavy collision in a marking contest. Najwa Allen’s ball movement out of defence was a highlight for the visitors early, as was their pressure game.

The Crows led the tackle count 25 to 14 at the first break, which was particularly important because this was an area that they struggled in last season. This was led by debutant Teah Charlton, who had a remarkable six tackles in just the opening quarter. West Coast started the second term with more aggression and won plenty of contested balls at centre clearances and around the ground. The Eagles got their first goal through Mikayla Bowen after a nice pass from Shanae Davison, but Woodland immediately responded with her second after some clean ball movement from Randall. An uncharacteristic poor turnover from ex-Giant Lisa Whiteley led to some great counter-attacking play from Ashlee Atkins, which Niamh Kelly used her pace to get on the end of and kick her first goal in AFLW. Just minutes later, Kellie Gibson had a golden chance to bring the Eagles to within a point but missed the running shot on goal. Phillips was a sole shining light for Adelaide in the second term, as she was powerful in the contest and turning around opponents very crisply on the outside.

The Crows were lucky to go into the main break with a five-point lead given West Coast’s dominance in that term. Early in the third, Phillips received a 50-metre penalty for an encroachment by the woman on the mark and kicked truly from the goal square. Encroachment 50-metre penalties were a theme of the day in AFLW, as Gold Coast were penalised heavily for them in their match against Melbourne earlier in the afternoon. Just minutes after kicking her first, Phillips kicked another goal, this time on her left after cleverly selling some candy in congestion. Adelaide’s pressure up forward continued to cause problems for the Eagles, as Charlton and Woodland created another turnover and the latter found Marinoff by foot for another major. Speedster Eloise Jones was tripped inside 50 and kicked truly after the siren to give Adelaide a 32-point lead at three-quarter time.

The Crows dominated the inside 50s again early in the last term but missed a few opportunities to extend their lead. This was until Phillips won a free kick on the 50-metre arc and found Ailish Considine with a nice pass, who kicked Adelaide’s eighth goal from 30 metres out. Although no more goals were kicked for the rest of the match, Gibson was dangerous up forward late and created some chances for the Eagles in the closing minutes. Former Bulldog Aisling McCarthy (15 disposals, two marks, seven tackles) and Emma Swanson (17 disposals, 11 tackles, two marks) were two shining lights for the Eagles throughout the contest. The Eagles will look to rebound next week against the relocated GWS Giants on Saturday at Norwood Oval. Meanwhile, Adelaide will look to build on their impressive second half when they take on Fremantle in a Sunday blockbuster.