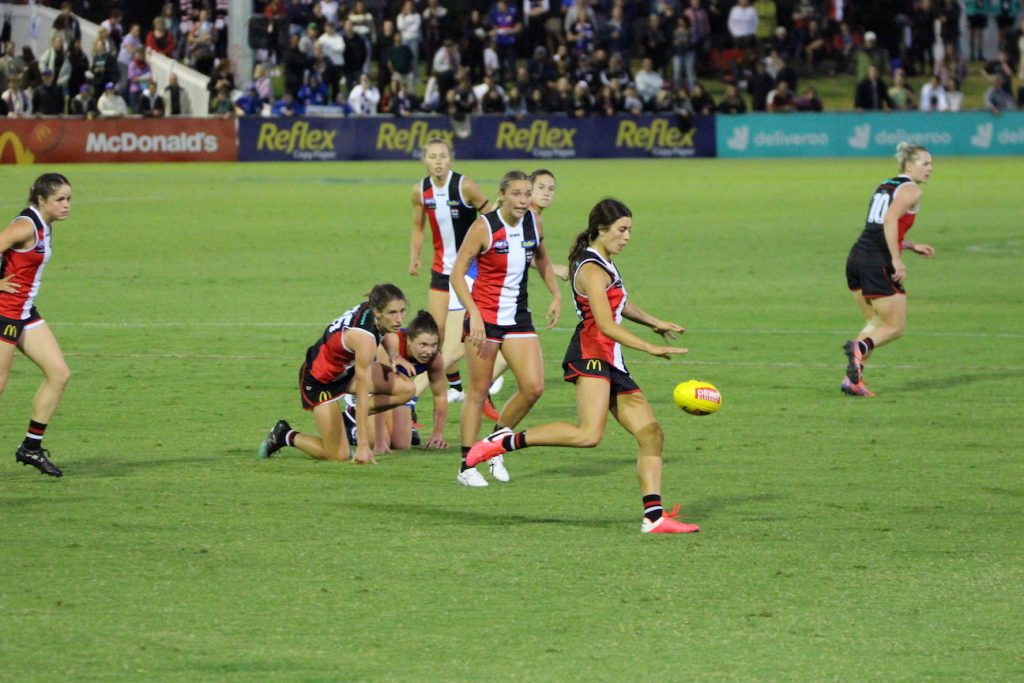 THE return of Friday night football for 2021 did not disappoint, as St Kilda and Western Bulldogs went head-to-head at RSEA Park in the AFL Women’s competition. Both teams came into the game with some new faces and plenty of youth, and they were on from the get-go. Both teams started hard and fast and maintained that intensity for the entirety of the game. The difference was the Saints took most of their opportunities on goal, and came out nine-point winners, 8.3 (51) to 6.6 (42) despite the late quarter pressure from the Bulldogs.

The match started with a bang, as first gamers Tyanna Smith and Jacqueline Vogt linked up to get the ball deep in the Saints forward line, where a free kick and 50 metre penalty was given to Caitlin Greiser, which resulted in an early lead for the Saints. The remainder of the quarter was an arm-wrestle from both sides, with every player being swarmed as they collected the ball and very few easy opportunities. Bonnie Toogood, Ellie Blackburn and Kate Shierlaw managed to find enough time in the chaos to get themselves on the scoreboard midway through the term. The rest of the quarter was a stalemate with both sides’ defensive strength shown, rebounding everything that came their way. Another free kick and 50 metre penalty to the Saints saw young gun Georgia Patrikios get on the scoreboard, and Isabel Huntington responded with a strong lead and goal with 30 seconds to go, giving the Dogs the lead into the second quarter.

The second quarter saw the Saints take control of the game, with goals to Darcy Guttridge, Smith and Vogt they dominated the scoring with the Dogs only registering two points for the quarter. Dogs defenders Lauren Spark and former Magpie Katie Lynch did well to limit the amount of damage the Saints could do. The Dogs came into the second half of the game with a new level of intensity and pressure, noticeably causing more headaches for the Saints than the previous quarter, sometimes overzealous giving away a string of frees which, luckily for them, did not result in any St Kilda goals for the quarter. The Saints defence was again rock solid despite constant pressure, only conceding one goal – from Huntington – right on the siren, after a very nice mark over the top of a pack.

After a quiet third quarter, scoring wise the fourth was bound to be a bit more busy, with the Dogs chasing an eight-point lead. The final term did not disappoint, as the intensity from both sides took another step up. Greiser kicked the first goal of the quarter, marking the ball in the goal square and increasing the scoreboard pressure. The next two goals came from Toogood and Blackburn to get the Dogs within two points with four and a half minutes to go. Once again the pressure and intensity from both sides lifted with the game on the line, but the Saints composure with the ball late would see them get a late goal from Guttridge following the ball over a marking contest into the goal square and putting the Saints ahead. The last minute of the game was played in the Saints forward half to see them win their first of the 2021 campaign.

Patrikios ended up getting the most of the ball on ground with 23 disposals and a goal, followed closely by Blackburn (21 disposals, two goals and five tackles) and Tarni White (20 disposals and seven marks). Rosie Dillon was a big contributor to the Saints pressure around the contest, coming out of the game with nine tackles to go with her eight disposals, while Berry led the dogs with six tackles. Another story coming out of the game was Alice Burke, wearing her father Nathan‘s famous number three at the red, white and black, getting the points over her dad.

The Dogs will face a determined Carlton side in the opener of Round 2 at Whitten Oval on Friday night, whilst Saints will have a longer break, coming up against North Melbourne at Arden Street Oval on Sunday afternoon.