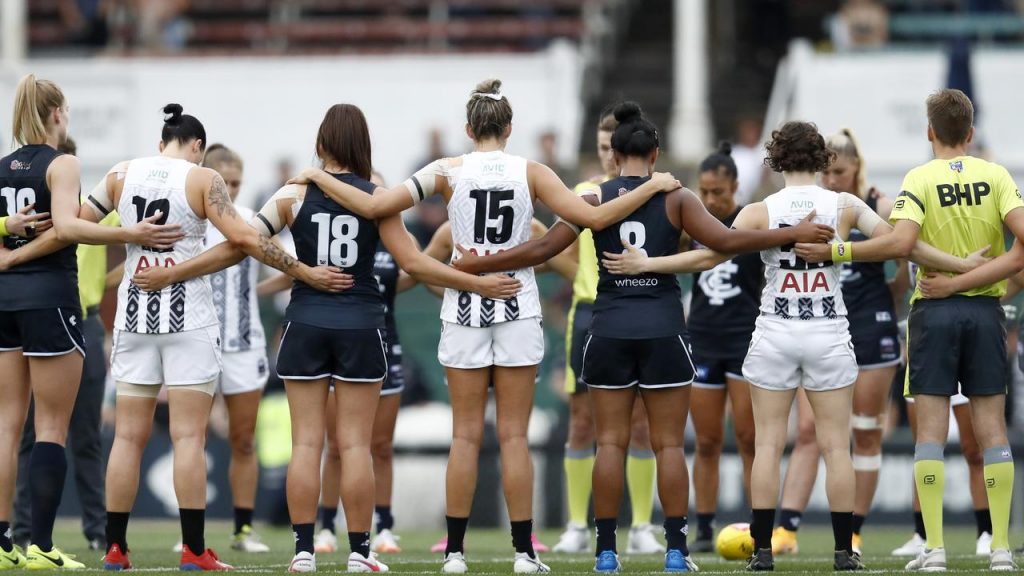 THE long awaited return of AFL Women’s for season 2021 arrived on Thursday night, with traditional rivals Carlton and Collingwood shaping up at Ikon Park for a huge start to season five. A tribute to Jacinda Barclay opened the match with a moment of silence, before football returned at full throttle with Victorian fans treated to their first live match since mid-2020. While a slow start from both sides kept a full house of fans on the edge of their seats, a stagnant Blues outfit and a huge four-goal second term from the Magpies saw the tides quickly turn as fast-paced footy began, with the Pies running out six-point winners 5.3 (33) to 4.3 (27) to open the season with a bang.

While the match may not have started with the bang many fans were expecting from the two sides, it was a tight battle early with neither side willing to give through the midfield and very little going the way of the scoreboard. Both backlines worked in overdrive limiting movement, with the first score of the game – a behind – going the way of Jaimee Lambert, rendered inaccurate by the continuous efforts of the likes of Mua Laloifi and Charlotte Wilson, who tracked the ball well. But much the same was happening at the other end, with the Blues missing targets and Ruby Schleicher proving a ball magnet and rebounded with ease.

But things quickly switched into gear for the Magpies in the second, with Chloe Molloy moved forward and turned on the foot candy with two goals from right out in front. It saw the Pies pile on the pressure as the Blues remained scoreless in the first half for the first time since 2019. Where the Blues’ defence had held strong in the first, they scrambled in the second term with no answers for the combination of Molloy and Bri Davey out the front, while Aliesha Newman turned on the speed – later reported for a dangerous tackle – and Lambert continued to fire on all cylinders as the Pies went four goals up, looking dangerous as the Blues wasted opportunities. Maddy Prespakis was unafraid of the contest, throwing herself at the footy and at former Blue Davey, while all eyes were on the matchup between Stacey Livingstone and Tayla Harris as the game hit the midway point, with the duo matching in intensity and hunt for the footy.

A talking to from Carlton coach Daniel Harford seemed to do the trick for the Blues, coming out with a renewed sense of intensity and pressure after half-time, hitting back with three straight goals. Nicola Stevens, Darcy Vescio and Jess Hosking all put majors on the board – with the third coming from a pinpoint precise Prespakis – as a scoring end shaped up. While the Baggers showed a lot more fight, the Pies retained the lead with an excellent running goal from Aishling Sheridan, courtesy of Lambert, seeing the Magpies head into the final change with an 11-point advantage.

After a busy second and third quarter, scoring dried up in the last with neither side able to really break through the fierce defensive buffers down back. While the Pies missed a couple of early chances to extend their lead, Carlton had their own fair share of opportunities too with the footy locked inside their forward 50 for much of the last five minutes. While the last score of the match was a goal to Kerryn Harrington after the siren, it was a sombre celebration as the Magpies started off their 2021 campaign with the solid 33-27 victory and plenty of confidence.

On the stats sheet, Britt Bonnici led all comers with 22 disposals, five marks and four tackles, while Lambert (18 touches, five tackles) and Prespakis (18 and three) were not far behind. Abbie McKay proved she has more in her wheelhouse leading the tackle count with seven to go with her 10 touches, while two players from each side racked up six tackles apiece in the physical battle.

Both teams have just over a week to prepare for their next respective matches, with the Blues heading to VU Whitten Oval next Friday night to take on the Western Bulldogs, while the Pies host the Gold Coast Suns in their first home match of the season next Saturday afternoon at Victoria Park.