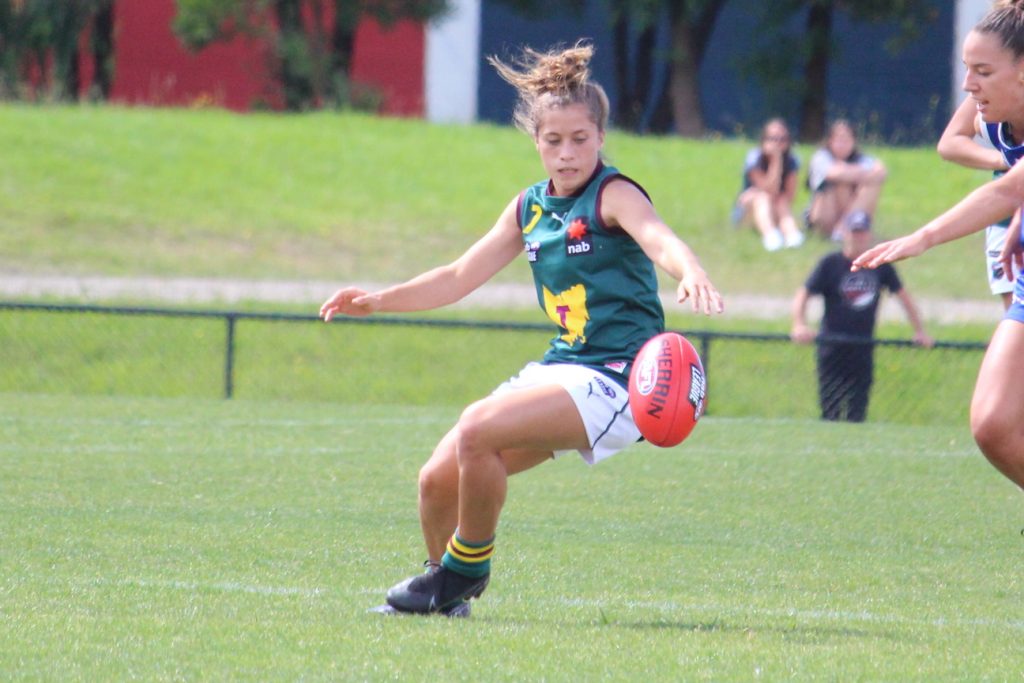 INITIALLY not having the ability to play local Australian rules football in her younger years, Meghan Gaffney tried her hand at soccer. When a pathway finally did open up in Tasmania’s North West, she took the plunge and has not looked back.

“When I was about 12 I started playing soccer at a club level,” Gaffney said. “Then from there as football wasn’t on the North West Coast, it wasn’t really established as female football pathways for anything. “So I started playing as soon as that came which was when I was 13. “I’ve been playing for four years with Ulverstone. “Last year I was lucky enough to get selected into the Devils squad and I played the two games that we had before COVID. “This year I’m in the Devils as well.”

Gaffney said making the switch – which then included travelling to not only different parts of the state but also interstate – was made possible thanks to her father, who she said has been her inspiration throughout her football journey.

“He’s really helped me with that, really supportive and taken me to trainings before I had my licence, just little things like that, it’s been really helpful to have someone there,” Gaffney said.

In 2021, Gaffney is looking to improve a number of aspects of her game, but is among the more powerful athletes when it comes to a combination of her strength and endurance.

“(I) Probably (want to work on) more of my skill work so kicking and hand work and just being quick to pick up the ball, clean,” Gaffney said. “My strength and endurance (are strengths). It helps me to get to the contests and just be an option for other players.”

Coming through the local junior teams and state league, Gaffney noticed the difference in quality when it came to the Tasmania Devils program.

“I think the standard’s a lot better, and also the girls, their mindset towards it,” Gaffney said. “It’s really good to have teammates that are like-minded and want to improve and get around each other, (they are a) really supportive group of people I think.”

Her goal in 2021 is to “just keep improving” and see how far she could go. Whilst her dream is not unlike many other talented teenagers aspiring to get to the highest level, Gaffney is just enjoying her football and looking forward to an uninterrupted season this year.

“Obviously it would be really cool to play in the AFLW, but I mean only a few people get selected,” Gaffney said. “If I did get selected it would be awesome, but otherwise just playing footy for fun, I really enjoy it.”