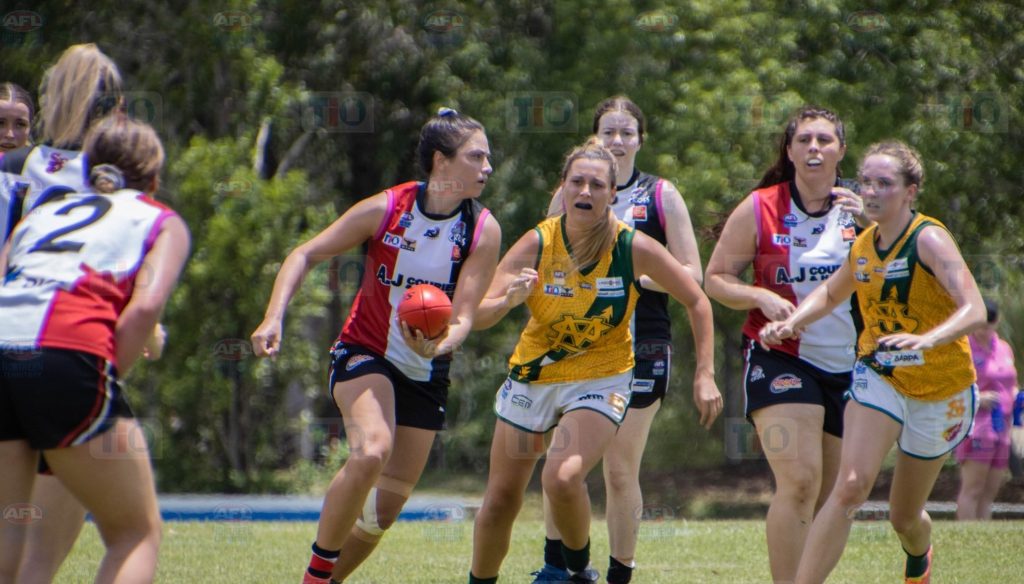 ROUND 15 of the Northern Territory Football League (NTFL) Women’s Premier League bounced down on Tuesday as Waratah thumped Wanderers by 73 points, but there are still three more fixtures left to play on Saturday. The top four sides will all be in action, with the game of the round pitting St Mary’s (second) against Southern Districts (fourth) under lights at TIO Stadium. Elsewhere, Pint takes on Tracy Village in a top-versus-bottom clash, while Darwin will look to win big against the seventh placed Palmerston Magpies. That, and more in our weekend preview.

Darwin will be looking for a percentage boost as it continues to push for second spot, but the seventh placed Palmerston Magpies stand in the Buffettes’ way on Saturday afternoon. While the Magpies are fresh off a breakthrough 44-point win over Tracy Village, a 40-point loss to the Buffs in Round 9 sparked a run of five consecutive losses before that. On the other hand, Darwin sprung off the Round 9 result to win five-straight games and gain a foothold in the top three. The Buffs will hope to bolster their finals positioning with just four rounds left, but Palmerston is all but officially out of the postseason running at this point. Darwin’s prime movers should be riding the high of last Saturday’s representative victory and are in good shape to continue that form here, with a big margin in mind.

First meets last as Pint takes on Tracy Village at DXC Arena on Saturday, with plenty separating the two sides in season 2020/21. The Queenants remain undefeated across 13 outings and have been far and away the best side thus far. On the other hand, Tracy Village is yet to claim premiership points at 0-12 and has long been planted to the bottom of the ladder. Only confirming the gap between these teams, the points for and against totals show that Pint boasts the best attack and defence, while Tracy Village ranks last in both categories. Their previous meeting saw Pint triumph 20.10 (130) to nil, with the Queenants’ only higher score coming just last round as they hit the ground running post-break. Tracy Village conceded its first total under 100 points since Round 4 last time out and also managed its first major in 2021, but remain a step off the competition and will again find the going tough in this fixture.

The game of the round sees St Mary’s lock horns with Southern Districts in the weekend’s lone top four clash, with plenty to play for in terms of the finals race. The Saints are currently locked into second at 10-3 and look back on track having accumulated four-straight wins after a couple of surprise losses. One of those came against the Crocs, who took out the two sides’ Round 9 meeting by 10 points en route to winning four of their last five games. The Crocs have only played once in 2021 though and while they are undefeated after beating the eighth placed Wanderers, are also coming off a bye. With such a high-stakes game ahead, that kind of context is perhaps unideal. Expect the Saints to either come out hot or take over in the latter stages, but the Crocs should prove plucky customers as they look to cement fourth spot.