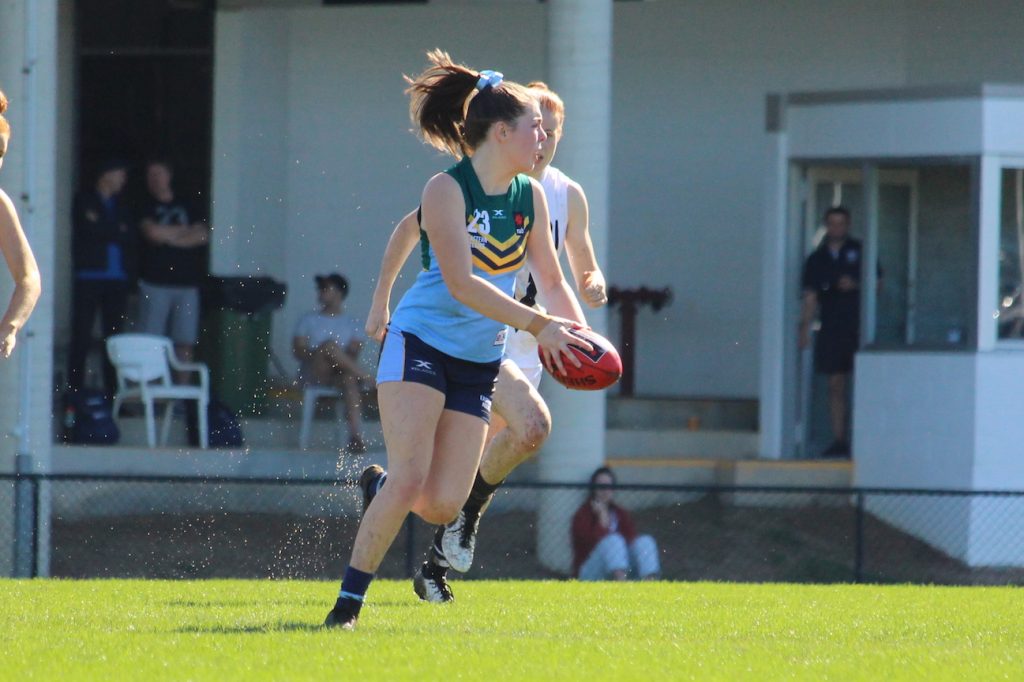 A FORMER state league soccer player who competed overseas at a tournament, Tasmania’s Amy Prokopiec has found her home with the Australian rules football code. Representing Tasmania Devils over the past two season in the NAB League, as well as Eastern Allies and her home club Clarence, Prokopiec has swiftly moved through the pathway since crossing from the round ball game.

“I played soccer from when I was five-years-old and took that pretty far,” Prokopiec said. “I was in the state teams and went to America for a tournament. “Then sort of hit a dead end with that and started playing footy socially about four years ago with my friends. “I really enjoyed it and started getting picked up for rep teams and travelling a bit, that was when I sort of thought ‘I can do this, this is what my calling is essentially’ and I found my skills from soccer transferred over to my football skills just with my ball use and ability to read the play. “Since then I’ve just been playing footy for the past four years and really enjoying it.”

Having predominantly played in defence for the NAB League Girls’ Tasmania Devils side, Prokopiec has been thrown all over the field in her junior career, also settling forward for the Roos’ in the Tasmanian State League Women’s (TSLW) competition.

“I’ve played all around the ground at club level and Devils,” Prokopiec said. “I’ve played in the backline last year, but I’ve been moved up to the forward line, so it’s very rewarding when you get to kick a goal which I really like, but I’m new to that position and I do know the backline, but at this stage I’m probably preferring the forward line.”

One of Prokopiec’s greatest strengths is her kicking ability, which is why she has been so reliable on the last line, or as a marking target inside 50. Able to take overhead marks and read the play well, the teenager said she was hoping to improve her off-the-ball work.

“My impact on the contest, and being more present on the ground, and making an effort and getting into the contests and helping my teammates out even if it is defensive or attacking,” Prokopiec said of her aimed improvements in 2021.

Having played in the United States for soccer then making the choice to switch to the oblong-ball game, Prokopiec said it was the “team vibe” that she could not get enough of in the sport.

“I definitely think the team vibe is different to any other sport that I’ve played and the girls you play with are really awesome,” she said. “It’s a very competitive environment but so worthwhile and so rewarding when you do something well, everyone gets around you. “The pathway for girls is so clear especially in Tassie with the football now.”

The Tasmanian talent has been able to follow her dreams thanks to the support of her family, who she said were her biggest inspirations along her sporting journey.

“My parents have both supported me through everything, driven me to training, and pushed me to be the best I can be through soccer and football,” Prokopiec said. “They’ve driven me up here today and just said ‘ just give it your best shot and keep going with it because you can go as far as you want to’.”

Prokopiec’s goal for the upcoming season is to perform at her best and see where it takes her. Whilst AFL Women’s is the goal at year’s end, she is focused on what she can control in the now.

“Just to play at the highest level I can and the Devils is a great way in the NAB League, and it gets great recognition before we come back to regional competition,” she said. “Absolutely, that’s (AFL Women’s) most people’s goal here, to play AFLW and be up and amongst those girls and create a lifestyle up there.”