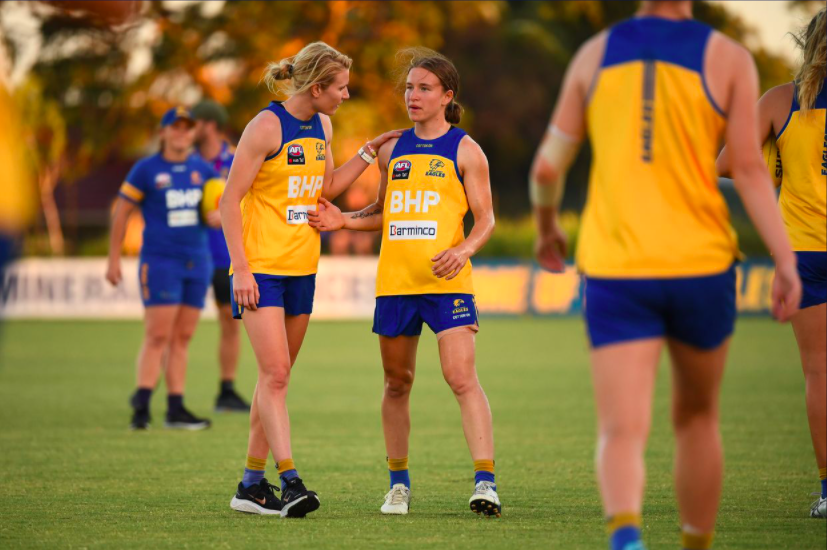 WEST Coast’s inaugural AFL Women’s campaign was hardly a cakewalk, but the Eagles will be hoping for a more competitive effort in 2021 with a year of experience under their belts and some promising additions made to the squad. Set to be led by Emma Swanson once again, the West Australian side has plenty of room for improvement and can do so steadily in year two.

The Eagles were rooted to the bottom of Conference B despite getting on the board with a shock maiden win over the Western Bulldogs in Round 4. A 1-5 record was the final tally for the expansion side, which was drawn against three finalists and just one fellow first-year team. Scoring was a sore spot for the Eagles, ranking last for points scored, while their percentage of just 32.1 was another competition low. The latter discrepancy also showed in West Coast’s points against column, which was only trumped by the winless Richmond. The Eagles had no All Australian representatives, though the consistent efforts of Swanson and Dana Hooker through midfield were particularly outstanding.

A relatively heavy turnover of players sees nine fresh faces land at the Eagles’ nest, headlined by the signing of former Western Bulldogs midfielder, Aisling McCarthy. The Irishwoman was acquired with help from a priority draft pick concession from the AFL, which was swiftly utilised in this deal. Having proven her worth over two seasons with the Dogs, McCarthy is set to bolster her new side’s engine room with the potential to also impact up forward. Tayla Bresland was also added during trade period, bolstering the Eagles’ backline having crossed from Fremantle.

A bumper draft crop was headlined by gun West Australian midfielder, Bella Lewis, who was snapped up with pick three. The Claremont product should slot straight into West Coast’s starting lineup; poised to feature through midfield credit to her work-rate, or up forward with her turn of speed and skill. Swan Districts high-flyer Shanae Davison will also look to crack early selection, promising to provide a bit of spark inside forward 50.

WAFLW coup Julie-Ann Norrish is another who should come into Round 1 calculations, selected at pick 32 in the draft from WAFLW club East Fremantle. 31-year-old former netballer Andrea Gilmore was also selected on draft night, adding athleticism and raw versatility to the club’s tall stocks. Having initially gone unselected, North Adelaide pair Lauren Gauci and Amber Ward were given opportunities in WA, while Demi Liddle comes in to replace the injured Ashton Hill.

Key trade coup, McCarthy looms as one to watch for the Eagles, set to take on a greater amount of responsibility through midfield among her new side’s emerging lineup. The Irishwoman has showcased a promising rate of development and performed consistently last year for the rebuilding Bulldogs, putting her in good stead to do exactly that with West Coast. McCarthy’s mature frame will take a ball winning load off the likes of Swanson and Hooker, while her ability to rotate forward and find the goals boosts the team’s scoring dynamic. The latter will also allow young stars like Lewis and Mikayla Bowen to rotate through the engine room with greater frequency.

The Eagles will look to surprise a few sides with their improvement in 2021, and much of that will come down to their ability to compete through the engine room. Swanson and Hooker are already established AFLW stars who will be aided by the ever-improving McCarthy, while Bowen now has a season of experience under her belt and Lewis will look to make a splash early. Add winger Niamh Kelly, the ruckwork of Parris Laurie, and even more moving parts to the mix, and West Coast’s midfield has a nice balance with plenty of dynamism.

It is no secret that West Coast lacks the firepower of more established teams. Hayley Bullas was the Eagles’ leading goalkicker last year with just two goals in a side which averaged 11 points per their five losses and just three more when their Round 4 win is included. The Eagles were thrice held to one goal and only managed more than two in that standalone win, meaning there is plenty of work to do to improve the competition’s least damaging attack. West Coast’s batch of recruits should go a ways to helping the cause, and midfield competitiveness will also become a factor in keeping the ball locked into the front half.

While West Coast will be expecting to build on its maiden season, a sharp incline to finals contention still seems a little out of reach. Becoming competitive each week and ticking over more than one win should prove a more realistic step forward for the Eagles, who have a developing list with a couple of key strength areas but also plenty of room for improvement.