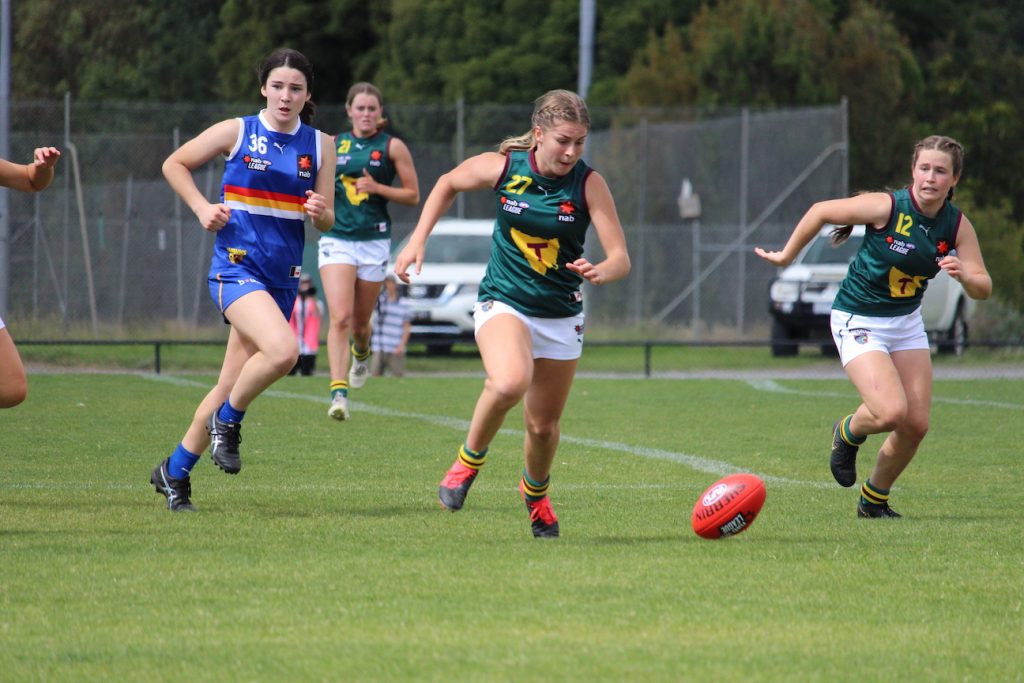 TASMANIAN talent, Aprille Crooks “definitely would take it with two hands” if presented with an opportunity in the AFL Women’s competition, but her main goal for football is to just have fun and push herself to be the best player she can be.

The Launceston Football Club talent is into her second year at the Tasmania Devils, having played Australian rules football for four seasons now. With a family heavily invested in the sport, it was only a matter of time before the midfielder decided to follow her father and sister into the oblong-ball code.

“I watched my dad play football all through my life so for 17 years I watched him play,” Crooks said. “I watched my sister get into it, and I left my dancing and netball to play football. “I’ve had amazing opportunities with it and everything playing at Launceston Football Club and this is my second year here at Devils.”

Crooks played both of the Devils’ games last year before the NAB League Girls season was cut, running through the midfield. Averaging 5.5 disposals a game, Crooks showed off her unbelievable defensive strengths, laying a whopping eight tackles per match, including a game-high nine tackles against Eastern Ranges.

It it then little surprise to hear that the defensively-minded Crooks “loves to lay a good tackle”. She also rates her speed as a strength, and combined with her tackling pressure, helps her be aggressive towards the ball both to win it, and win it back from the opposition.

“I really want to improve hitting my targets in my kicks and everything,” Crooks said of what she hoped to build on in 2021. “Looking for my best option and really getting in there when there’s a stoppage.”

Crooks thrives on getting in and under through an onball role, but she is equally able to play off a wing, a role she has a familiar understanding of from when she first started her football journey.

“I am a midfielder, it’s a good role and everything, I do love to play the wing as well,” Crooks said. “Generally because that’s what I played my very first year of football and that’s what I got drilled into me, is how to play that role. “But coming into the middle I love it, and it’s a really good time.”

Having come through the pathway over the past four years, Crooks immediately noticed the step up when she took on Oakleigh Chargers and Eastern Ranges in the NAB League Girls.

“It’s definitely such a step up from Launceston to Devils, the work rate and the intensity and the talent from all these girls here is just incredible,” Crooks said. “I had a really good transition through my football. “My dad was my coach and he really pushed me and everything, I had good connections through Devils and everything, it was really smooth but definitely a step up from your club football.”

While the journey itself has been enjoyable, it is the social connections that have kept Crooks around.

“Definitely all the girls I’ve met through the sport (are what’s kept me around),” Crooks said. “Having my dad as motivation as well, he’s really pushed me to go with my football, and it’s just so much fun, why wouldn’t you want to come back?”

Crooks said her father was “definitely” her greatest inspiration in the sport.

“Yeah he is my idol in football, what he’s done and everything is absolutely incredible and I aspire to be like him,” she said.

As for her goals this season and long-term, Crooks said she “honestly just wants to play football” after such an interrupted 2020 season.

“I really just want to get out there and play as many games as possible with Devils and really show them what we’ve got,” she said. “Just go as far as I can, I’m not necessarily striving for AFLW or anything, but if that was an opportunity, definitely would take it with two hands and go for it, but just to have fun with it, really push myself and go out there.”