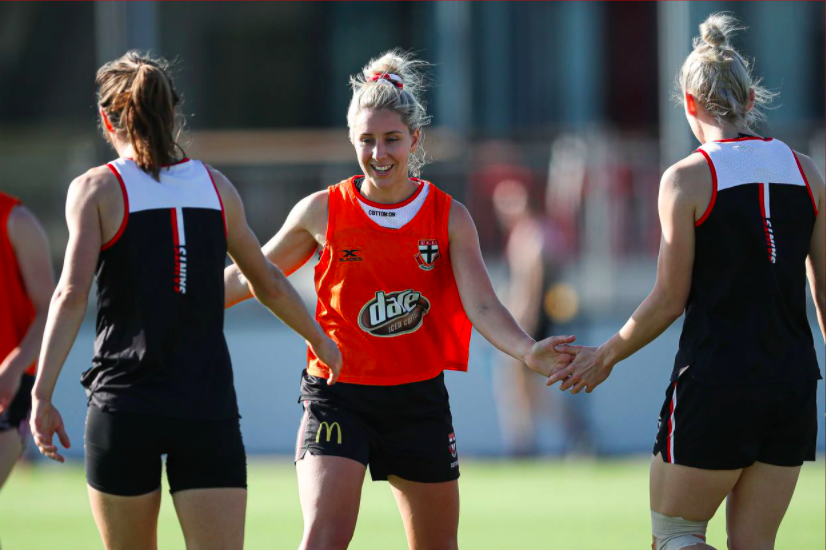 ST KILDA’S inaugural AFL Women’s campaign produced some notable highlights as the Saints brought football back to Moorabbin, with solid building blocks now in place for an improved second season. Another promising draft crop and handy additions during trade period will only add to the Saints’ emerging squad, which will again look to knock on the door of finals in 2021.

As one of the better performed expansion sides, St Kilda finished fifth in the stronger Conference A at 2-4. Losses in the first two rounds were quickly forgotten as the Saints upset foundation club, Melbourne by five points to open Round 3, making for a memorable maiden win. A heartbreaking one-point loss to Fremantle followed, but showed that the Saints could hang with the best on their day.

They would be rewarded for competitive form with another victory in Round 6 after keeping Richmond goalless, capping off a very respectable first crack at the top flight. Leading goalkicker and joint best and fairest, Caitlin Greiser was the sole Saint to earn All Australian honours, also finishing one spot ahead of fellow first year gun Georgia Patrikios (equal-third) in the Rising Star voting.

Having already formed a solid foundational core, the Saints picked up another couple of established players to accompany their exciting draft hand. The dynamic Bianca Jakobsson was a terrific coup, but has recently undergone surgery to repair a broken collarbone sustained in a scratch match on the eve of season proper. Jayde Van Dyk was the other trade acquisition, set to help shore up the defence after crossing from Carlton.

Tyanna Smith headlined St Kilda’s draft effort and will likely prove an absolute steal at pick six. The Dandenong Stingrays graduate adds to the Saints’ exciting young midfield with her searing pace and capacity to play both inside and outside. Father-daughter selection Alice Burke was another value pick at 24, again bolstering her new side’s engine room with toughness and great tackling pressure.

The versatile Renee Saulitis was another shrewd selection, able to add some spark going forward and allow the Saints’ second year guns to perhaps spend more time in midfield. Southern Saints recruit Jacqueline Vogt rounded out St Kilda’s draft hand, with Tahlia Meyer taken after the fact and Jess Matin getting her chance in place of Irishwoman, Clara Fitzpatrick.

Prized draftee, Smith is one to watch for St Kilda, especially after the level of performance from the likes of Patrikios, Molly McDonald, and Isabella Shannon in their debut seasons. Smith represents the next generation of talent which has taken over the competition of late and only adds to St Kilda’s exciting young depth. Her athletic traits blend nicely with high-level skill and good balance in midfield, pointing towards the kind of upside which could see her prove to be one of the top two players of her draft class.

The Saints are fierce and love to compete. Headed by a strong, established leadership group and backed by competitive youngsters with plenty of class, the Saints are well balanced in terms of their squad profile and have plenty of players who can come in and push highly-fancied opposition. Peta Searle‘s side suffered a season-high loss of 25 points in 2020, while also going down by just 13 points to the reigning premier and a single score to the undefeated Fremantle. If they can continue to rattle established teams and lean on the experience of year one, these Saints could well exceed expectations.

A relatively heavy turnover of players means the Saints will be tested for squad cohesion and depth, but they have proven strong in the face of such challenges thus far. Scoring may be an area of concern with not much in the way of firepower aside from Greiser and the 30-mark cracked just once last season – against the winless Richmond. Kicking a winning score will be key to not just competing with the top sides, but getting the better of them on any given day.

St Kilda showed up in its maiden AFL Women’s season and proved plenty of doubters wrong with strong performances each week. A couple of wins is a solid base to work off and notching at least one more in 2021 would be a decent pass mark with finals contention in the Saints’ sights. Should they again bind together to overcome injury disruptions, this exciting young unit could cause a few big upsets.