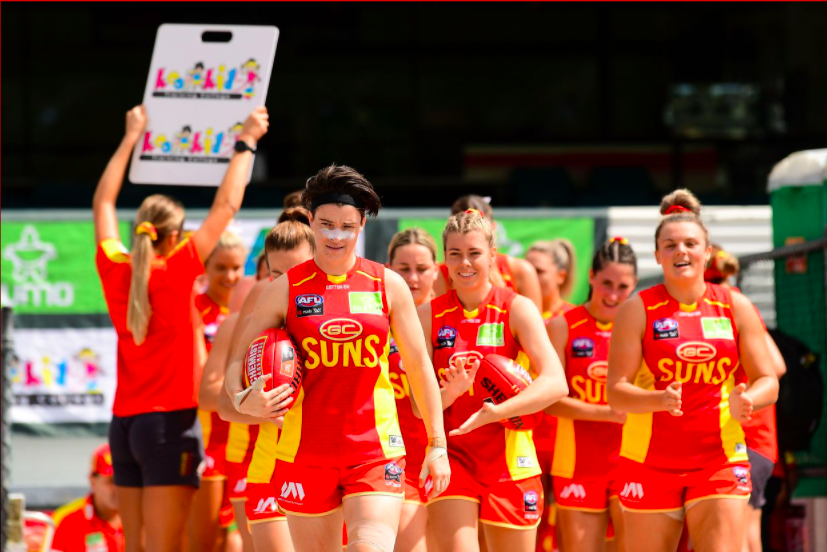 GOLD COAST achieved a finals berth in its inaugural AFL Women’s campaign, exceeding expectations and setting a promising base for its second go-around at the elite level. With a new set of co-captains and a bumper draft crop, the Suns will be hoping to shine just as bright in 2021 and again feature in the postseason.

A one-point loss in a two-goal game served as Gold Coast’s AFL Women’s introduction and the Suns did not have to wait long for their maiden win as they trumped fellow newcomer, Richmond in Round 2. The competition’s first Q-Clash resulted in a thrilling draw at Metricon Stadium, with fans and pundits alike taking note of the side’s tenacity and youthful exuberance. Back-to-back losses pegged back Gold Coast’s momentum, but a second win against another expansion side in West Coast ensured the Suns would qualify for a surprise finals appearance. The undefeated Fremantle saw that the glory would be short-lived, trouncing the Queensland side by 70 points in the first postseason round.

Former North Melbourne and St Kilda midfielder Alison Drennan was Gold Coast’s lone trade signing, promising to provide another strong body and some experience among the Suns’ engine room. The draft was where Gold Coast did most of its work, nabbing some strong local talent at bargain value and completing a haul of eight fresh faces.

Annise Bradfield was the first Queenslander called out on the night and looms as another midfielder who could crack the starting lineup straight away. The Suns nabbed Maddison Levi at pick 50, a steal at that range with Brisbane out of draft calculations. The tall forward should add some strength to her new side’s front half alongside Sarah Perkins, who was snapped up at pick 23 and slotted straight into the leadership group.

Levi was one of six Suns selected after pick 50, with four of them local talents and two coming from other states. Janet Baird, an NT native should deliver even more firepower to the forward half and some dash elsewhere, while Elizabeth Kearney comes in from the VFLW system.

A surprise pick-up at the draft, no less at pick 23, was Perkins. The journeywoman key forward is the perfect addition for Gold Coast’s young side; both in terms of the role she fills and the character she brings. A former premiership player and All-Australian with Adelaide, Perkins is fresh off three appearances for Melbourne as a top-up player last year and gets a lifeline at her third club. She is well known already, but could well prove a key figure in this emerging Suns side which has previously lacked potency.

Defence. The Suns may have lost four games last season and the last one came by 70 points, but they laid claim to the fifth-best defensive record in terms of points conceded overall. Structure from the back half is the first base good teams build in the modern game, and Gold Coast seems to have made great strides in that department early on. Youthful exuberance is another reason the Suns can go far, with their never-say-die attitude allowing them to bring it to highly fancied teams on any given day.

Attack. Only the bottom two teams managed to score less points than the Suns in 2020, with a season-high total of 34 not exactly making for formidable reading. The Suns were also kept to just one goal twice during their maiden campaign and while they have bolstered the front half at the draft, have plenty of work to do to become a potent attacking unit.

The Suns are an exciting young side with plenty of scope to match their achievement of finals qualification in year one. There may be some downs with the ups, but this Queensland side has already shown great spirit and should only be better for the raft of inclusions they have made. Expect the Suns to ruffle some feathers and create upsets against good teams caught lacking.