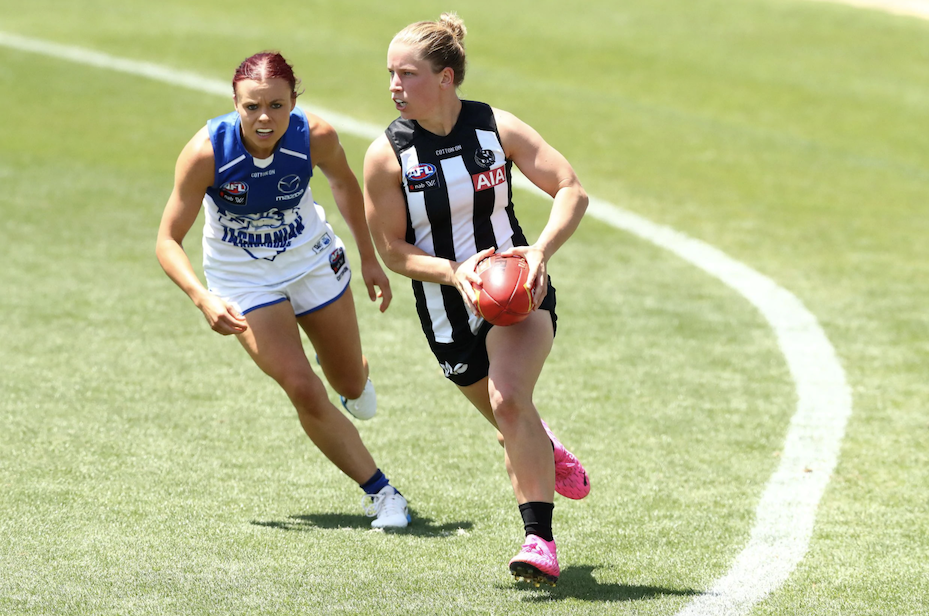 COLLINGWOOD is on a mission to go deeper in the AFL Women’s finals after a promising first season under a new head coach, bouncing back from a last placed finish in 2019.

After a disastrous 2019 season which saw the club handed the wooden spoon with just one victory to their name, new coach Steve Symonds turned it around in 2020 for the black and white to play finals for the first time. Brianna Davey lived up to all expectations crossing from arch rivals Carlton, having an impact throughout the season, while Jaimee Lambert had an unbelievable season to win the club best and fairest. Had in-form defender Ash Brazill not torn her anterior cruciate ligament (ACL) against Melbourne, it is not against the realms of possibility to suggest Collingwood could have gone even deeper than falling to North Melbourne by a kick in the elimination finals.

The Magpies lost a couple of key players over the off-season, particularly Sarah D’Arcy and Sarah Dargan who both headed to Richmond, while Aliesha Newman (Melbourne) and Abbey Green (North Melbourne) came to the club. Whilst not like-for-like, the Magpies targeted size and speed in the 2020 AFL Women’s Draft. Father-daughter selection, Tarni Brown, and Joanna Lin provide the outside class and skill, while Amelia Velardo, Abbi Moloney and Bella Smith add height to the side. Talented sports star Imogen Purcell also joined the club to add natural athleticism to the mix.

There are plenty to keep an eye on, but perhaps none more exciting than the versatile Chloe Molloy. Expected to return forward like she did in her junior days and in her return season off a long-term injury in 2020, Molloy will be better for the run last season and expected to continue her form from her debut season. Now four preseasons in at the Magpies, the high X-factor marking talent has all the ability to tear games apart and will be crucial in hitting the scoreboard regularly.

The Magpies showed rapid development from 2019 to 2020, even with the loss of Brazill midway through the season, and Molloy returning from injury having missed so much football. The likes of Sharni Layton, Sarah Rowe, Mikala Cann and Alana Porter all made huge strides last season, and throw in career-best seasons from experienced duos of Brittany Bonnici and Steph Chiocci, it is little wonder why the Magpies could get it done.

Consistency is the big question mark for the Magpies in 2021. Their best was by far good enough to challenge the best sides, as shown by their upset of Carlton, and pushing Fremantle and North Melbourne all the way in finals. Unfortunately it was more lapses within games that cost them, having had chances to win those close ones, and then having the disappointing outing against Melbourne in Round 4. If they can iron out that consistency, particularly four quarter consistency, then they are a side to watch this season.

Collingwood is more than capable of challenging the big sides in 2021, and while D’Arcy in particular will be a massive loss for the black and white, they have recruited and drafted well, and will hopefully be at full strength again for a finals tilt.