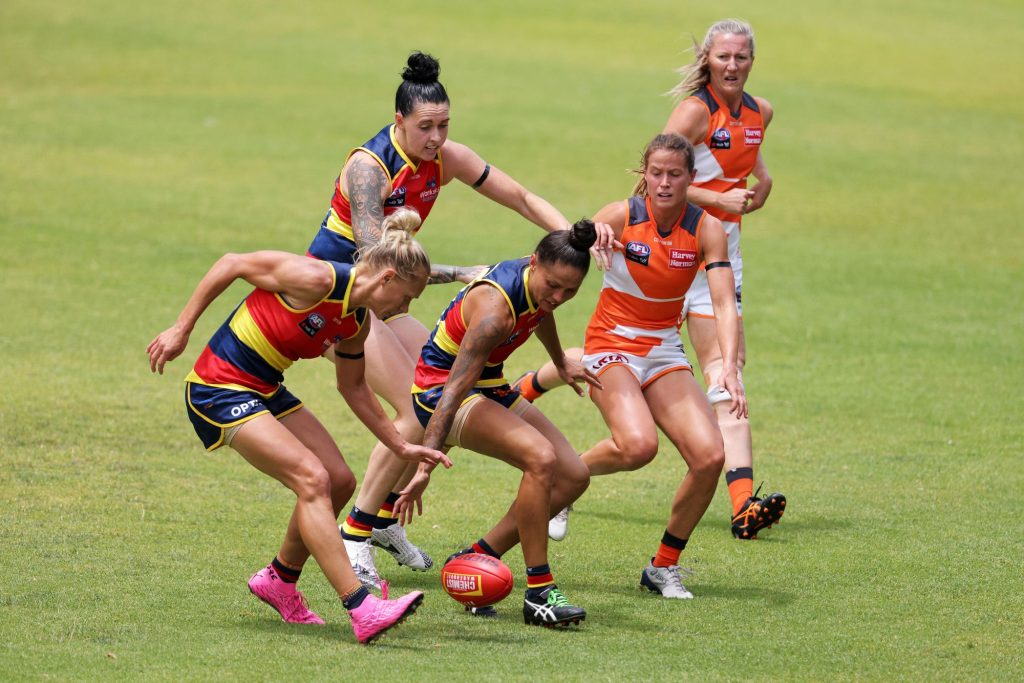 ADELAIDE will aim to catapult itself back into premiership contention after an injury-riddled 2020 season. Head coach Matthew Clarke has made some major changes to his coaching staff, with club greats Scott Thompson and Tom Lynch joining the panel. The trio will restock Adelaide’s side with a number of returning premiership stars.

2020 RECAP
The Crows finished sixth in Conference A last year, winning just two of their six matches. Premiership players Chelsea Randall and Chloe Scheer missed the entire season with anterior cruciate ligament (ACL) reconstructions, while Deni Varnhagen and superstar Erin Phillips only played three matches between them as they returned from their own respective knee issues. Injuries to several other players meant that the Crows were forced to blood more and more youngsters as the season progressed. Adelaide’s two wins came early in the season against St Kilda and Geelong, two sides that did not qualify for finals in 2020. Realistically, the Crows just struggled to move the ball from end to end and failed to apply enough pressure on opposition sides.

A shining light throughout 2020 was midfielder Anne Hatchard, who won their best and fairest and made the AFLW All-Australian side after averaging 25 disposals, six tackles and three inside 50s per game. Tackling machine Ebony Marinoff was effective alongside her at the clearances, but the pair did not get much help from the Crows’ wingers or forwards, particularly late in the season. Sarah Allan was the side’s other strong performer, as she led Adelaide’s defence well and was rewarded with a spot in the All-Australian side.

NEW FACES
Lively forward Jess Sedunary returns to the club after playing one season for expansion side St Kilda. Sedunary was a premiership player for the Crows in 2017 and is a proven goalkicker at senior level. Although she is coming off a broken fibula and may take some time to reach full strength, she will bring a wealth of leadership and experience to the group. Former Giant Lisa Whiteley will be an important addition to the Crows’ defence, while young winger Hannah Munyard, who has good pace and skills, provides some much-needed depth after playing three games for the Bulldogs in her debut season.

Draftees Teah Charlton, Rachelle Martin and Ash Woodland are three readymade recruits that should make an immediate impact for the club. Charlton, taken with pick four in the AFLW Draft, is a talented midfielder and half-forward from South Adelaide with goal sense, effective ball use, overhead marking ability and aggression. Expect her to be in the running for the NAB AFLW Rising Star Award. Midfielder Martin won the South Australian National Football League Women’s (SANFLW) 2020 best and fairest award (alongside Hatchard) and played a match for the Crows last year as an injury-replacement player. Flexible utility Woodland gained AFLW experience for Melbourne in 2019 before winning North Adelaide’s best and fairest award last year in a premiership side. She also won the SANFLW Leading Goalkicker award in 2020.

With Randall, Scheer, Varnhagen, Hannah Button, Rhiannon Metcalfe and Phillips all set for full seasons this year after serious injuries in 2020, they can be considered ‘new faces’ as well. On the other hand, Adelaide loses veteran Courtney Gum along with premiership players Jess Foley, Courtney Cramey and Sophie Li to retirement.

ONE TO WATCH IN 2021
Chelsea Randall is the one to watch. She is arguably the most courageous defender in AFLW and her skills, leadership and football IQ were sorely missed last year. With Randall positioned alongside Allan and Marijana Rajcic in defence, Adelaide should prove very difficult to score against.

Justine Mules is the other Crow to keep an eye on. She finished third in Adelaide’s 2020 best and fairest count after averaging 11 disposals, two tackles and two inside 50s per game. The two-time premiership player has shown continuous improvement since her debut season and looks set to have a major impact on a wing in 2021.

WHY THEY CAN WIN IT
Two words: premiership experience. With 19 premiership players on their list, the Crows have more of these than any other side in the competition. This experience will prove valuable in finals, and it is well known that the Crows’ top names are made for the biggest stage. With numerous young players rising up the ranks and some veterans nearing the end of their careers, the hunger to recapture premiership glory should be there as well.

QUESTION MARK
Adelaide’s lack of depth is their biggest question mark. This was exposed last season following injuries to their franchise players, as the young Crows struggled to hold up their end of the bargain. However, this experience could prove valuable for the inexperienced players as they should now be more comfortable competing at senior level. Additionally, the inclusions of Sedunary, Whiteley, Munyard and the draftees should help improve their depth.

FINAL WORD
A line-up that includes Randall, Marinoff, Hatchard, Phillips and Allan is a scary proposition for any opposition side. The Crows have elite talents all across the ground and should catapult back into finals contention, but it is unclear whether they are truly premiership contenders. Fremantle, North Melbourne and Carlton were the best sides in 2020 and deserve favouritism ahead of the Crows at this stage.

Much of Adelaide’s hopes depend on the fitness and agility of the seasoned players returning from injury. Their forward line was the main area that struggled last year, as they often failed to lock the ball inside their forward 50 and relied far too heavily on Stevie-Lee Thompson, Eloise Jones and Danielle Ponter. The returns of Scheer, Phillips, Sedunary and Button should help spread the workload in this area.

We we will learn more about the Crows’ premiership aspirations when their season gets underway on the 30th of January against the Demons.