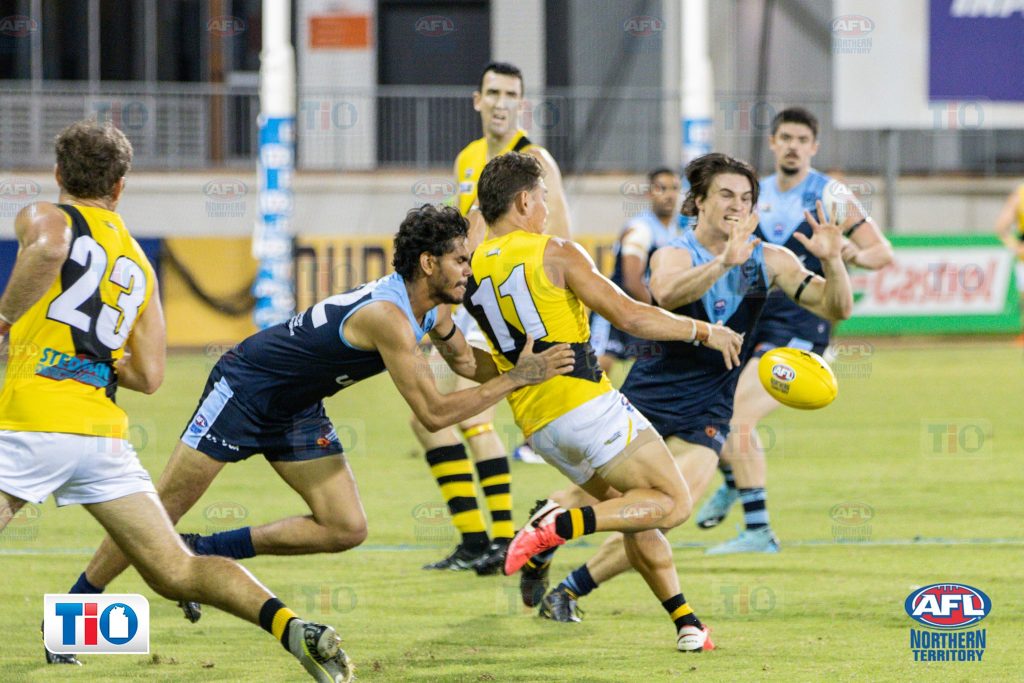 THE Northern Territory Football League (NTFL) Men’s Premier League returned last weekend, with Round 14 set to showcase some tantalising contests. While a super Saturday is in the works with back-to-back-to-back matches at TIO Stadium, expect the final match of the round between ladder leaders Nightcliff and St Mary’s to be the real kicker as the two sides face off for top spot. All that, and more in our weekly preview.

Expect a tough battle here from a rapidly improving Tiwi outfit, although against third placed Wanderers the side will need more than a couple of sparks to run down the rampaging Muk Muks. While Tiwi was afforded an extra week off due to a COVID-19 scare – with the postponed match against Waratah set to take place next Friday, January 22 – the Wanderers proved once more why they are amongst the ladder leaders and will look to continue their winning ways against the lowly Bombers.

There is no doubt that Brodie Newman, Brett Eddy and Dane McFarlane are the ones to watch for the Wanderers, with all three consistently providing the goods and relatively unstoppable once they get going. With 49 goals to his name across 12 matches, Eddy is rarely beaten and can find plenty of the footy, while Simon Bates is another key option inside forward 50. For Tiwi, expect a tough contest from the regular performers in an incomplete squad, with Fletcher Carroll, Mason De Wit, Adam Sambono and Allen Christensen all crucial last time these two sides met, though none of these players have been listed for this encounter.

After an extra week off, Waratah will be chomping at the bit when they take on the Palmerston Magpies in the second match of the TIO Stadium triple header. While the two sides are only separated by a few positions on the ladder, the Warriors arguably have the form coming into this encounter after beating the Magpies only two rounds ago, although the Magpies’ break has been shorter and really challenged St Mary’s last round, putting them in good stead to force the hand of Waratah this round.

Waratah’s Cameron Arnold (15 goals), Jake Sutton (14) and Jae McGrath (12) have been consistent up the ground, combining well up forward to apply scoreboard pressure, while Palmerston’s Toshie Kunoth (17 goals) leads the charge up forward for the Magpies. Kunoth has a trio of Daveys named out the front alongside him, able to switch on the speed and excitement, while Matthew Dennis and Eric Guthrie will be crucial if the side can steal away momentum.

While these two sides have not played since Round 2 back in October, expect an intriguing battle between Districts and Buffaloes given they sit close together on the ladder but have a few games buffer between them. With the top five within reasonable touching distance for the Crocs but a much lower percentage than many of the top sides, they will need to fire on all cylinders against the Buffs, who had a shocker last round and will be wanting to lift their form once more.

For the Districts, the efforts of Charles McAdam and Jesse Clark will be crucial with the duos consistency required in what is expected to be tight matchup. With plenty of options inside 50, Andrew Boseley (19 goals) and Luke Kiel (13) are currently leading the way. For the Buffs, Brodie Foster is a consistent threat out the front, booting 39 goals for the season while Matt Campbell is also a solid option, able to find the big sticks with ease but also assist further up the ground.

A huge first versus second matchup closes out Round 14, as the ladder-leading Nightcliff host St Mary’s in an enticing battle. With their last encounter coming in the opening round back in early October – seeing Nightcliff run home with a solid 52-point victory – both sides have proved tough to beat since then as the Saints sit two points behind the Tigers and looking to shock the reigning premiers. While both sides arguably have the form coming into this match, Nightcliff blew Darwin out of the water last round while the Saints were tested in patches by Palmerston, so expect the top side to reign supreme here, too.

There is no doubt Nightcliff’s Kyle Emery and Cameron Ilett are the ones to watch, with the Saints needing to pile on the pressure early against the two key options around the ground. Add in the likes of Dominic Brew, and St Mary’s will realistically need to dominate possession early to come out on top. For the Saints, expect the ever reliable Dylan and Jack Landt to provide plenty of sparks, as will reliable goalkickers Beau Tedcastle and Jackson Calder.