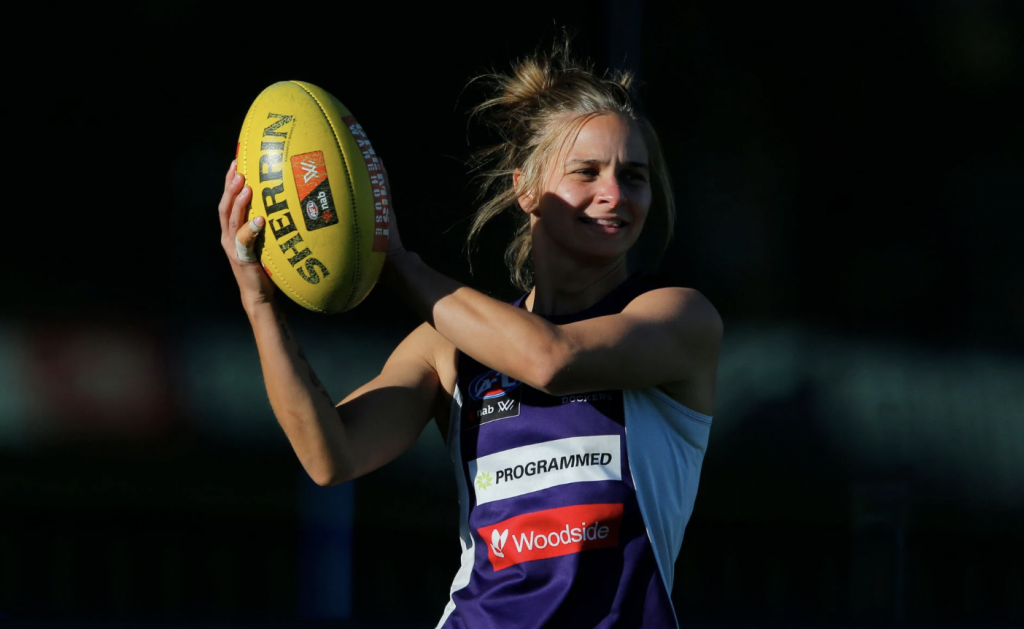 IN a unique series for the lead-up to the 2021 AFL Women’s season, Draft Central will look at 10 players who have played under 10 games to watch this year. Whilst it would be easy to pick those who finished high in last year’s Rising Star, or top picks this year, we have opted to look at players who have been around at least two seasons but have only managed to play nine games or less. We continue the countdown at number eight with Fremantle’s Tiah Haynes.

Haynes is the unique one in this list, having only been drafted in last year’s 2020 AFL Women’s National Draft. However the 27-year-old has played the required two seasons at the elite level, representing the Dockers way back in the foundation seasons of 2017 and 2018. There, Haynes managed to play six games – three in each year – before being delisted at the end of 2018. For those that might not know Haynes’ story, the talented defender has had to fight back from adversity to earn a spot back on the Dockers’ list, and has come so far that the club that did not lose a game last year has brought her back.

A hardened midfielder who can play in multiple roles – especially coming out of defence – Haynes has endued both shoulder and knee injuries over the journey, but was able to stand out for Subiaco this year. Playing in the West Australian Football League (WAFL) Women’s competition, Haynes has built up her strength and power, as well as improved her skills since intitially getting a chance at the elite level, and becomes one of the few to get a second crack after being delisted in the early seasons.

Haynes has earned a spot on the list following a strong 2020 WAFL Women’s season with the Lions, but her story of resilience has been one for the ages. She has had to undergo three knee reconstructions, as well as a shoulder injury that curtailed her first AFL Women’s season. One aspect about Haynes that many might have forgotten is the fact she was the first selection in the Hampson-Hardeman Cup exhibition match between Melbourne and Western Bulldogs back in 2014. She was selected ahead of the likes of Darcy Vescio, Emma Zielke, Dana Hooker and Kaitlyn Ashmore who were all picked up in the Top 10.

The then-20-year-old was a rising star coming through the state league level, and now six years older, is ready to use the experience of hardship and setbacks to stamp her authority on the competition. Fully fit, Haynes could very well be a strong player in the AFL Women’s, and no doubt a huge acquisition for the Dockers who have shown great faith in bringing back one of the most talented junior players, and rewarding her for her efforts both on and off the field in the past few years.