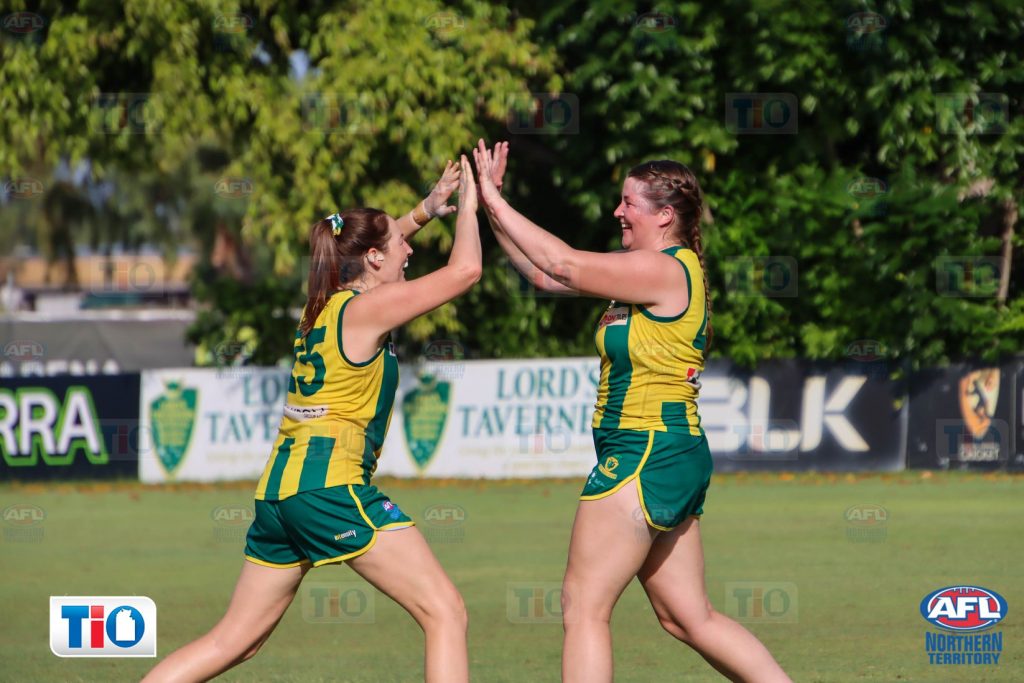 PINT remained undefeated heading into the break of the NTFL Women’s Premier League with Round 12 seeing a number of close shaves and a couple of big blowouts highlighting the difference between the top and bottom sides while Darwin Buffettes were handed the bye this week.

Nightcliff got out to a fast start piling on five goals to nothing and steadily extended that lead in the second quarter opening up a 63 point margin against Tracy Village. The Razorbacks ended their goalless streak nailing their first major in the third quarter however that is all they wrote as Nightcliff kept them goalless in the final quarter and piled on five goals themselves to run out 112 point victors in a convincing performance. It is fair to say that it was all one way traffic from the opening minutes of the game and Tracy Village were never within fighting distance however did manage to slot that all elusive goal.

There was no shortage of multiple goal kickers for Nightcliff with four players managing two or more goals showcasing the array of talent they have inside 50. Jessica Sara-Peris slotted four majors while Amy Pittman also managed four. Rose Russell returned to the goalkickers list while the ever-reliable Jacqueline Anyon-Smith bobbed up with two goals of her own to take her season tally to 16. Olivia Hatzismalis starred in her second outing of the year as did Eliza Morrison with the latter notching up her third consecutive week in the bests. The sole goalkicker for Tracy Village was Kahla Dumbris while Zhoe Clarke was her usual consistent self and Lisa-Maree Toner managed to have an impact across the ground.

It was an uncharacteristic performance by Pint who despite being kept to 23 points still managed to get the job done against the Southern Districts running out eight point winners in a close contest. Accuracy proved to be an issue for the ladder leaders notching up 11 points while only managing to slot two majors for the game, meaning they could have had a day out, had they been more accurate in front of the big sticks. Nevertheless the win enabled Pint to stay on top of the ladder and create more of a gap while the loss saw the separation form between the Crocs and top three.

In a low scoring affair it was Jasmyn Hewett and Laura Wright that led the way for Pint with the duo nailing a goal apiece. Hewett was also named in the bests for her efforts alongside the likes of Amy Chittick, Reni Hicks and Cassie Henderson. For Southern Districts, Bella Clarke and Grace Mulvahil shared the goal kicking duties with a major each while Tahlia Holtze also got amongst the bests. She was joined by the likes of Lateesha Jeffrey and Rhiannon Busch who both impressed across the ground despite being in a losing side.

It was easy pickings for the Saints who made light work of the Wanderers keeping them to a mere point for the entire game. Despite struggling to hit the scoreboard themselves in patches due to their inaccuracy St Mary’s managed to find their mojo and post a handy total to notch up a 69-point win.

There were a number of key contributors across the board for the Saints with Tesharna Maher having no trouble finding the big sticks with her three majors and subsequently named in the bests for her performance. Tamia De Araujo weaved her magic with a goal in her first outing for the season while Jasmine Anderson also slotted a goal to add to her building tally. Shannon Ponter managed to have an influence on the scoreboard and across the ground as did Michaela Long. Although the Wanderers did not have any goal scorers the likes of Tishara Davern, Sophia Mauboy and Kaitlyn Armstrong all strong competitors.

Waratah notched up their fourth win for the season downing Palmerston by 29 points in the final game of the round. It was a slow start to the game with only two goals scored in the first half of football between the two sides. The Magpies were kept scoreless in the final term while Waratah managed to kick away but will be rueing their missed opportunities with some wayward kicking.

Toya Norris found her kicking boots with a goal as did Crystal Browne with the duo hitting the scoreboard for Palmerston. Tabitha May was in the midst of it on the footy field while Iesha Ronberg was once again named in the bests highlighting her consistency for Palmerston. Looking over to Waratah and Lisa Miceli was the key contributor with two majors of her own while Lauren O’Shea, Breanna Martin and Tarryn O’Hehir also contributed to the scoreboard.