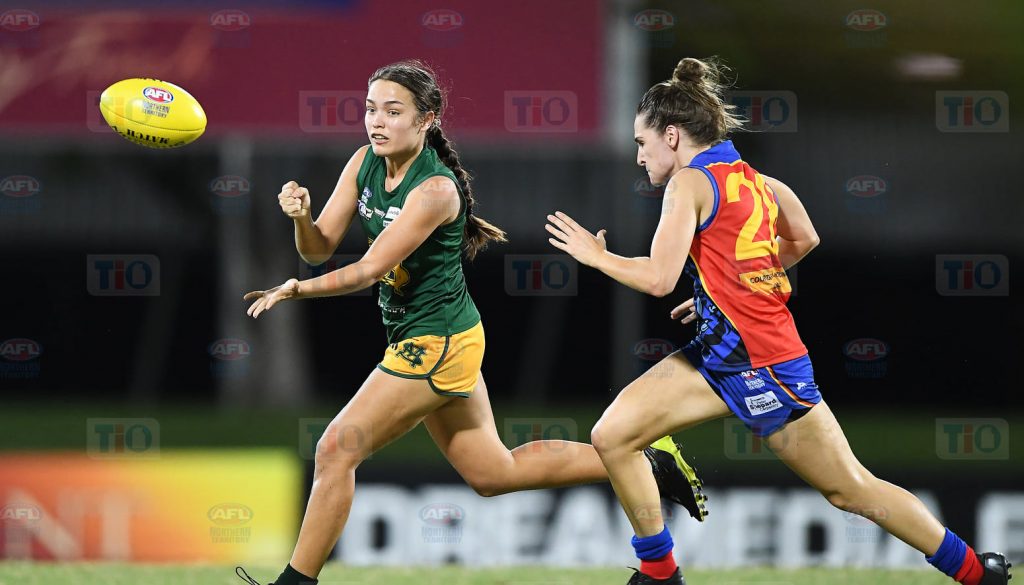 ROUND 11 of the Northern Territory Football League (NTFL) Women’s Premier League saw the top sides bolster their standings at the pointy end of the ladder, headlining a mixed bag of results. Pint is still undefeated and top of the standings after a 10th win, as Darwin remains the closest challenger after surviving a danger game against Nightcliff, while Southern Districts and St Mary’s dined out on bottom three sides in a couple of genuine blowouts. All that, and more in our weekend wrap.

Southern Districts stretched its undefeated streak to eight games with a comprehensive beating of bottom three side, Palmerston at Norbuilt Oval on Saturday afternoon. Competition leading goalkicker Tayla Thorne snapped up seven of the Crocs’ 10 goals, playing a leading hand in the 10.8 (68) to 2.3 (15) result. She was not alone either, with Grace Mulvahil booting two majors and fellow goalkicker Bella Clarke among the victors’ best contributors. Nat Medbury and Billie Byers put Palmerston ahead at quarter time with their respective majors, but could do little to thwart Districts’ charge thereafter. Meanwhile, Tabitha May was named the Magpies’ best player in their third-consecutive loss.

Darwin escaped its danger game against Nightcliff with a full set of premiership points, helping the Buffettes remain clear in second place with eight wins in 10 outings. The Double Blues led by under a goal at the first two breaks but were rather wasteful within scoring range, with Nightcliff taking full toll to snatch the three-quarter time lead. Darwin stood up at the close though, sneaking back ahead at the ideal time to win 5.12 (42) to 6.4 (40). Machaelia Roberts and Jacqueline Anyon-Smith both booted two goals for their respective sides, with Kylie Duggan another to find the big sticks as one of Darwin’s best, while Kristy Irvine did the same as Nightcliff’s leading performer. Kiera Kurnoth was also among the action as her side won out for the third-consecutive time.

A final term fightback from Waratah was hardly enough to put a dent in Pint’s 16-point victory at DXC Arena on Saturday, with the 6.3 (39) to 3.5 (23) result seeing the Queenants remain undefeated after 10 games. Having kept Tahs to just one goal after three terms, Pint steadily compiled six majors of their own to set up a 31-point lead at half time. Waratah left its best effort for last with two goals to nil, but it did little to change the outcome. Jessie Baumer and Laura Wright combined to boot five of the winners’ six goals, while Rebecca Pryer was named best afield as the likes of Reni Hicks and Jasmyn Hewett again returned big performances. Waratah ended with three individual goalkickers as the side again fell to back-to-back losses.

It was raining goals as 11 individual goalkickers headlined the 134-point thumping St Mary’s inflicted on Tracy Village, seeing the Saints keep touch with the competition frontrunners while the Razorbacks remain winless. The tone was set early as St Mary’s piled on five goals in the opening term, a feat which was matched twice thereafter all while keeping Tracy Village scoreless. Charli Simmonds, Marrietta Puautjimi, and Michaela Long all booted three majors for the victors, while Tesharna Maher was also among her side’s best with two goals. Kaitlin Battel was named Tracy Village’s most valuable player in another heavy loss, while Zhoe Clarke was again a reliable figure for the embattled side which has lost seven games by over 100 points.