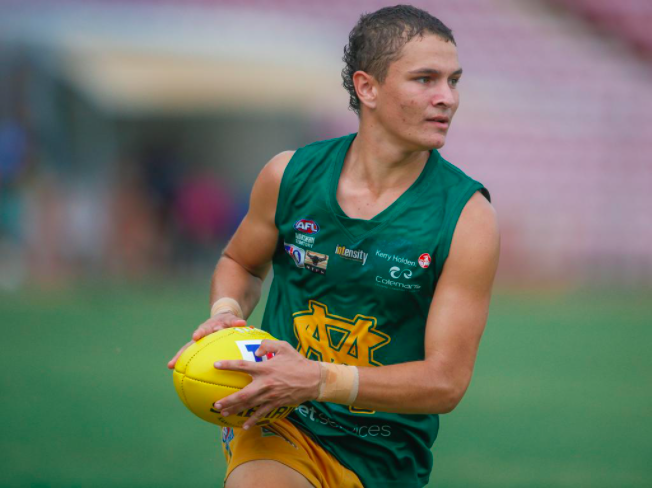 SATURDAY’S top-of-the-table clash fully delivered on the hype, as nothing could separate Nightcliff and Wanderers after four quarters of high level football. The clash headlined a ladder defining round where Palmerston picked up win number two, St Mary’s consolidated its top three spot, and Waratah extended the gap to the bottom sides by trumping Southern Districts. That, and more in our weekend wrap.

Palmerston came away from one of the competition’s toughest away trips with premiership points, defeating Tiwi by nine points at Wurrumiyanga Oval on Saturday. The 8.7 (55) to 6.10 (46) result is the Magpies’ second win for 2020/21, and their second against the winless Bombers. After breaking away to a three goal to nil start, Palmerston never looked back despite Tiwi’s best efforts to bridge the gap late. Samuel Autio booted three goals for the winners, with fellow multiple goalkicker Rohan Armstrong among the Magpies’ best alongside Eric Guthrie and Matthew Dennis. Tiwi finished with six individual goalkickers, with the likes of Gibson Turner, Jack Mongiatti, and Fletcher Carroll among the best Bombers afield.

St Mary’s stamped its finals credentials with a 29-point win over fellow contender Darwin at TIO Stadium, seeing the Saints go clear in third spot. A four-goal head start helped set up an unassailable lead for the victors, who ensured they kept their noses in front with consistent scoreboard pressure in the face of Darwin’s charge. Young gun Beau Tedcastle starred with five goals, a feat matched by Buffs spearhead Brodie Foster. Jackson Calder also found the big sticks with three majors, while the likes of Tylah Saunders, Dylan Landt, and Daly Andrews also impressed for the Green Machine. Ryan Pendlebury and Matt Campbell were among Darwin’s key contributors in the loss.

Nightcliff and Wanderers played out to a 79-apiece draw at Nightcliff Oval on Saturday night, seeing the two-pronged top-of-the-table race continue. The Muk Muks trailed at every break but remained within touching distance of the reigning premiers before taking the lead in the final term with an early four-goal blitz. But two late Nightcliff goals tied the scores and saw a golden opportunity for either side squandered. Veteran Cam Ilett was Nightcliff’s best player having booted three majors alongside Kyle Emery, a feat matched by Brett Eddy for Wanderers and beaten by Simon Bates‘ four majors. Defender Brodie Newman was also among the best for Wanderers, while Ryan Mu and Dom Brew stepped up for Nightcliff.

Waratah widened the gap to the bottom three with a comprehensive 37-point win over Southern Districts to round out the weekend’s action, shaping the ladder even further. The Crocs were kept to just one goal across the first three terms as Tahs helped themselves to nine, before Districts managed to make some consolation inroads come term four. In the end, Waratah still doubled their opponents’ score in the 11.8 (74) to 4.13 (37) result. Waratah finished with nine individual goalkickers in a terrific team spread, with the likes of Sam Godden and Dylan Collis contributing well to the win. Meanwhile, Geelong Falcons graduates Jesse Clark and Jay Dahlhaus were at the forefront of Southern Districts’ effort.