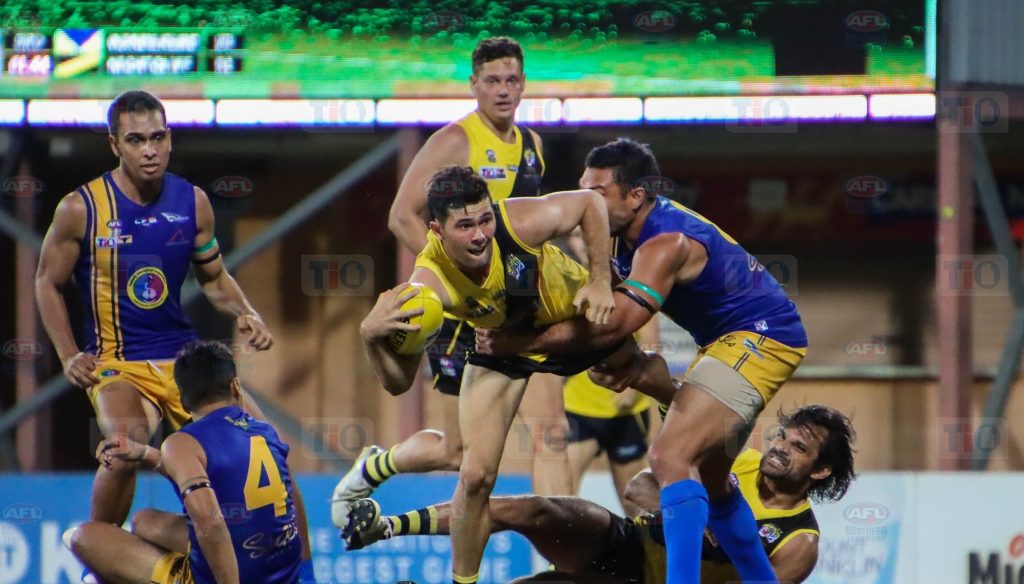 THE TOP four Northern Territory Football League (NTFL) Men’s Premier League sides are set to square off in Round 10, making for a definitive weekend of action among the finals contenders. In a cool quirk, the fixture sees first take on second, third clash with fourth, fifth meeting sixth, and seventh locking horns with eighth as four separate venues play host to each game on Saturday. With that being the case, there looms a great chance for leading sides to gain some much-needed breathing space from their rivals. All that, and more in our weekly preview.

A bottom of the table clash kicks off Round 10 as Palmerston makes the early trip to Wurrumiyanga Oval to take on Tiwi. If it were not for the Round 2 clash between these sides they would both remain winless, but Palmerston got on the board that day via a 73-point trouncing. This time, the Bombers are on home turf and will hope to build on the improvements which have seen them get within a goal of their opponents twice in the last three weeks. While the Bombers have lost more games by over 50 points (five), it is Palmerston which holds the greater average losing margin at 51.6 points, compared to Tiwi’s 44.8. Given the amount of punishment received by both sides thus far, they should be hungry as ever for a rare win.

The Bombers come in with a strong side on paper too, boasting competition stat leaders Fletcher Carroll (average disposals, clearances) and Mason De Wit (rebound 50s) along with the in-form Adam Sambono and dangerous forward pairing of Ross Tungatalum and Austin Wonaeamirri. Tiwi’s run and gun style has sucked in even the best of sides, so should again prove effective here. Tyrrell Lui is back in Palmerston’s defence, which may well come under fire should Matt Dennis and his centre bounce partners in Chris Williams and Eric Guthrie fail to get going. The versatility of Nigel Lockyer Jnr should also prove a handy wildcard for the Magpies, who will need a bit of dynamism to keep the Bombers guessing.

The weekend’s first top four clash takes place as St Mary’s and Darwin do battle at league headquarters, looking to separate their equal 6-3 records. After a lacklustre opening fortnight, the Saints have gone on to win six of their last seven games, with their only hiccup coming at the hands of Darwin in Round 6. Their three-consecutive wins since then still read better than Darwin’s 1-2 effort, with the Buffs’ early season form tapering off a touch before another redemptive win over Palmerston last week. Just four per cent separates the two sides after nine rounds, with the Saints scoring a touch less overall but maintaining a tighter defence.

St Mary’s should fancy itself in the midfield battle, with Nate Paredes teaming up with Daly Andrews and Nick Yarran, while the likes of Dylan Landt and Shaun Edwards can also rotate through the engine room. The Saints will have to be wary of Darwin’s front six though, with Matt Campbell in fine scoring form and supported well by Ishmael Palmer, Brodie Foster, and Michael Hagan, among others. Shannon Rioli and young Beau Tedcastle loom as key forms of firepower in St Mary’s response under spearhead Jackson Calder, making for a lively kind of contest.

Nightcliff and Wanderers are set to headline the Round 10 fixtures in a top-of-the-table clash under lights at Nightcliff Oval, with clear supremacy at the pointy end up for grabs. Both sides are locked at an even 7-2 record apiece, so needless to say this game looms as an important one in the minor premiership race. The Tigers got home by 10 points in the Round 3 meeting between these two teams and were the only side to have beaten Wanderers up until last week. It means that both clubs have dropped points in one of their last two outings and will be itching to return to top form for this clash.

Danny Butcher and Kaine Riley loom as fantastic additions for Nightcliff having been named in the extended squad, but like most weeks face stiff competition for spots. Among the standouts of late, veteran Cam Ilett has booted eight goals in his last two games, with Kyle Emery the other to notch a bag of five last week. Midfielders Dom Brew, Daniel Bowles, and Brodie Filo have also consistently featured among the Tigers’ best. Wanderers has looked just as settled in 2020/21, with competition leading goalkicker Brett Eddy in fearsome form, supported by Simon Bates while Dane McFarlane runs the midfield and Braedon McLean leads from defence alongside Warwick Williams and Brodie Newman. Victorian coup Shaun Mannagh should also be a handy inclusion for the Muk Muks in what promises to be a ripping contest.

Southern Districts will be out to keep touch with the top five when it takes on Waratah at Gardens Oval, rounding out the weekend’s action. The Crocs had strung together a handy run of four wins in five matches after a 0-3 start, but had their run to the finals spots halted last week by St Mary’s. Meanwhile, Waratah looks every bit a premiership smoky after accounting for Nightcliff in a stunning upset last time out, making it two wins on the trot. With one game already separating these two sides, another loss for Districts would see its finals hopes narrow that little bit further.

Darcy Lang is a big name featured on Waratah’s team list, with the recently delisted Carlton midfielder/forward jumping straight into the Warriors’ lineup. He should provide some handy forward momentum alongside Abe Ankers and Robert Turnbull, with Michael Newton ready to return and spearhead Tahs’ attack. Stat leaders James Tsitas and Nikolaus Rokahr have been prolific for the Crocs and should contribute to a tight midfield battle, while Andrew Boseley heads the forwardline and Ed Barlow looks to string some form together having returned to the fold.

Featured Image: Action from the Round 3 clash between Nightcliff and Wanderers | Credit: Celina Whan/AFLNT Media