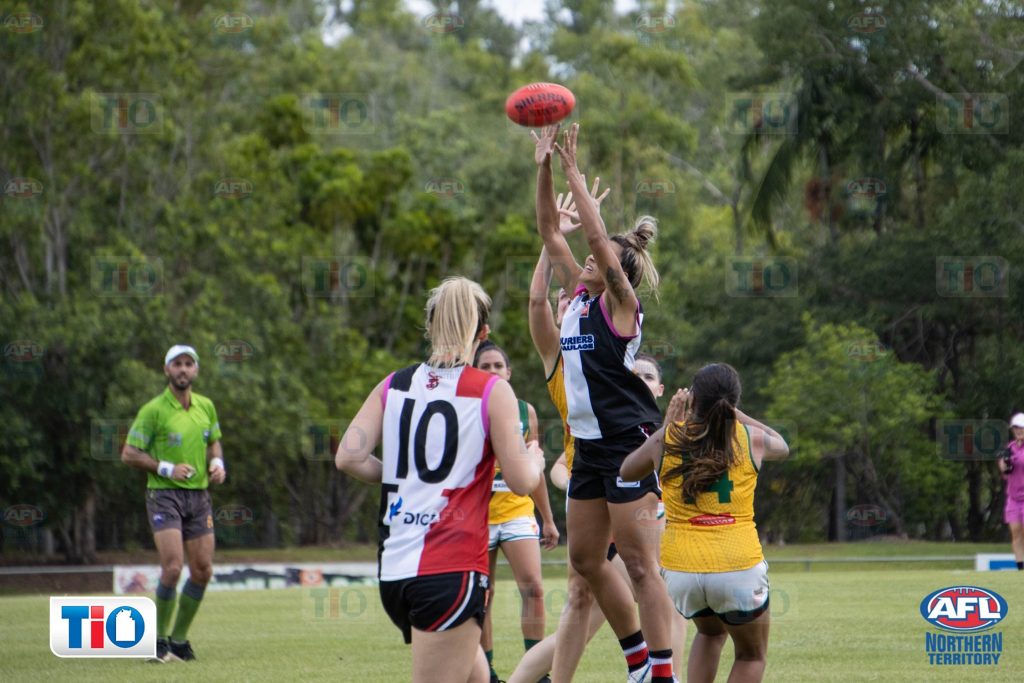 AS quick as a flash, the NTFL Women’s Premier League season has flown by as the competition has now officially passed its midway point of the 2020/21 season. The finals race is heating up with a mid-table log-jam evident already, while Pint sit comfortable and undefeated at the top of the ladder as the competition heads back into return fixtures. Tracy Village are yet to win a game but will get some valuable rest this week with a second bye for the season, while this weekend of action will see some teams hope to replicate their Round 3 form from their last encounter against their respective sides.

While Nightcliff come into this match off a Round 9 bye, Wanderers will be looking to take every chance they have of upsetting the Tigers this week. Neither team has significant issues finding the goals, but at times seem to lack the defensive pressure to limit their opposition in the scoring department making for an intriguing matchup here. Nightcliff came away with the “W” in their Round 3 encounter, downing the Wanderers by 19 points and certainly giving the Tigers some confidence coming into this one, but will need to be hyper-aware of the side’s ability to fly out of the blocks and challenge teams.

Kaitlyn Armstrong (Wanderers), Lauren Gooden and Emma-Lou Wolsey (both Nightcliff) were crucial for their respective teams last time around, hauling much of the forward load. The Wanderers will need some of their other forward targets to take some of the load off Armstrong if they are to win this one, with Shekeine de Satge and Tishara Davern the likely suspects although the former is more of a transitional player. Wolsey’s powerful kick was huge early in the season but a couple of quiet weeks have allowed the likes of Darcy Elliston and Lauren Gooden to step up, while there is no doubt Jacqueline Anyon-Smith and Mickayla Ward will be up for a big match after a week off.

This battle between last year’s premiership sides is sure to be a big one, with their Round 3 match ending with a draw in a fitting finish to the close encounter. Factor in that both Waratah and Southern Districts come into this round with a couple of season-saving wins on the board over the last three rounds, and this match could realistically go either way. Neither side lack in firepower, but at times they seem to fall apart when their key forwards are under pressure, with both sides’ leading goalkickers in Tayla Thorn (Southern Districts, 17 goals) and Lisa Miceli (Waratah, 14 goals) flying under the radar for the most part until the past few rounds.

Expect the usual suspects to command the footy in this match, with plenty of key options on both sides able to hit the scoreboard and do so with ease. Add in the fact that both teams need a win here to realistically stay in touch with the top sides and this should be just as tight a matchup as it was the first time around. Given Waratah need a victory on the board to generate some more confidence and Districts are only a leg up due to a second draw, expect the firepower to be out in spades with the aforementioned duo just the tip of the iceberg for both teams. Crocs young gun Grace Mulvahil and Jessie Brock are able to switch on with ease, while for the Warriors there is no doubt Jenna Singh will be out with a vengeance as will Danica Pedersen.

While the battle between St Mary’s and Darwin Buffettes was close last time around, expect big things from the two top four sides this week with much more at stake as the finals race heats up. The Saints have breezed through this season for the most part, soaking up pressure and outlasting in tough battles, but came off second best last round to the Crocs which allowed the Buffs to equal the Saints on points and be in with a fighting chance of taking over second on the ladder. Neither side has any shortage of key options around the ground, and have both continuously showcased defensive capabilities to match their respective forward firepower, with plenty of options able to put on consistent performances.

Intriguingly, when taking a look at the season stats so far there is a significant similarity between the two sides and the way they go about their game, particularly inside forward 50; while both sides have a key option up forward, they do not rely on that one player and have no shortage of key pillars inside 50. While this was not as evident in their last battle, where the two sides combined for 56 points overall with no multiple goalkickers, the likes of Saints trio Michaela Long (12 goals), Danielle Ponter and Ash Melnikas (both eight), and Buffs trio Zoe Anderson (14 goals), Machaelia Roberts and Delsey Ah Wang (both eight) showcased their respective abilities to hit the scoreboard with ease. While the Saints realistically should get the job done here given the consistency of Megan Williamson, Ponter and Melnikas, the Buffs have a plethora of key figures around the ground with the workrate of Dominique Carbone and Jemma Iacono unquestionable.

The final match of the round is a standalone Sunday fixture, pitting top-of-the-table Pint against the lowly Magpies. Given the Queen Ants still sit undefeated after nine rounds and rarely come off second best in their closer encounters, able to play through tough pressure and conditions, they should realistically have this one tied up with a confident 44-point Round 3 victory telling much of the tale prior to the match beginning. That being said, the Magpies have finally put a few wins on the board, albeit not consistently, and have proven they are capable of forcing teams into close margins so will look to do exactly that in this encounter. Realistically, the Magpies need a win here if they want any chance of moving up the ladder for a chance of finals footy.

Last time they met, Pint put on a show with Jessie Baumer leading the charge with three goals to her name, while Cassie Henderson showcased her consistency to lead from the front. With three multiple goalkickers behind Baumer and conceding just two goals from the Magpies, it is safe to say the Queen Ants will come into their second battle with plenty of confidence. The Magpies have no shortage of star players, but just have lacked the fire in the belly to really get the job done. Tabitha May and Iesha Ronberg have consistently stood up throughout the season, while Arthurina Moreen and Crystal Browne have ben solid fixtures inside 50 combining for 15 goals across their respective three games apiece. For Pint, Amy Chittick, Casey Morris and Jasmyn Hewett are the ones to watch out for up forward, with 13, 10 and eight goals, with Chittick a consistent performer alongside Henderson.