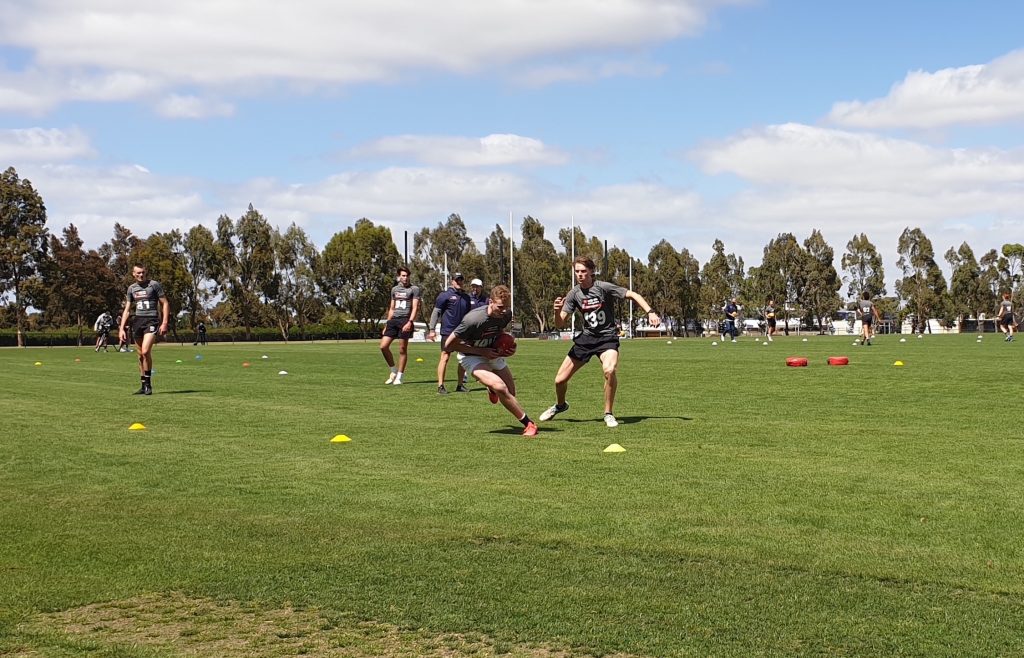 VICTORIAN AFL Draft prospects hit the track one last time before draft day, strutting their stuff at Highgate Reserve in a one-off training session on Wednesday. The meet served as a final chance for recruiters to survey the talent available in this year’s pool, just a week out from draft day on December 9.

Players who earned Draft Combine invites in September were split into two major groups, initially separating those from country and metropolitan regions, before being divided even further into small drill groups of five to seven participants. Among those on display were potential number one picks Jamarra Ugle-Hagan and Elijah Hollands, the latter of which participated in a running program amid his recovery from a preseason ACL tear.

Draft Central analyst Ed Pascoe was on hand in Craigieburn to recap all the action and give an insight into how things panned out.

A sense of irony came over me walking into Highgate Reserve, the same ground I last got to watch a lot of these young players back on March 15, right before Covid derailed the Victorian football season. It was a Northern Knights vs. Oakleigh Chargers trial game on that day and the ground was bustling with keen onlookers, many the same faces I would see today and it was great to see the development of some of these players. One of the big matchups in March was Nikolas Cox vs. Jamarra Ugle-Hagan which looked to be a clash we would see if the National Championships went ahead. Fast forward a few months and both players have bulked up, looking as sharp as ever in the lead up to the most important time of their lives.

To start the day it was the Vic Metro based players who were split into four training groups with the following participants:

Vic Country players would later take the field and were split into three main groups:

There were four main drills conducted after a warm-up; with ground balls, marking, kicking, and handballing the respective focus areas. The ground ball drill involved taking half volleys, running towards the loose ball coming from behind them, taking on the bump bag and finally working in pairs to pick the ball up cleanly under pressure from a teammate.

The marking drill was changed slightly as the day went on but the main focuses were receiving a high ball before getting called to a certain colour cone to run to, turn, and then meet at the drop zone of the ball. Contested marking was the final focus, with two players coming from either the back or front to contest a mark. This drill was certainly the most competitive and one of the drills players had the most fun in, with plenty wanting just ‘one more go’.

The kicking and handballing drills were fairly standard with a three-man weave, and a short to long stationary handball among the handball drills. The kicking drills consisted of kicking to a stationary target often 45 degrees to another player, and finally a drill which involved kicking to a leading player which really separated the better kickers on the day – especially in the notoriously windy conditions at Highgate Reserve.

Overall, it was a great day for the players to get a run while bonding with some former teammates and potentially future teammates. It was also a nice little refresher for scouts and recruiters as well, who got to see how some of these players have progressed both in their football and in their body. It is hard to gauge who would be considered the ‘standouts’ from this training session but most players put in the effort required and it was also good to see some really get involved with coaches and looking for advice in certain drills, showing their commitment to getting the best out of themselves.