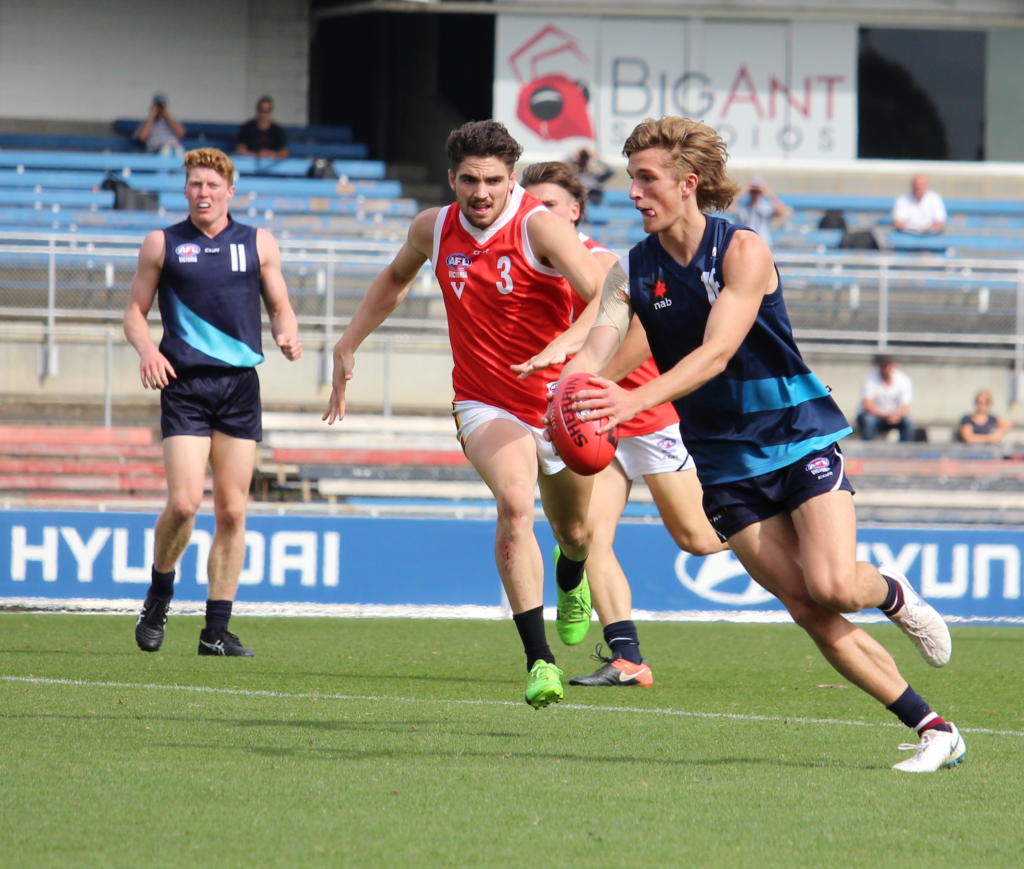 In Draft Central’s newest series, we take a look at some of the draft prospects who remain in contention to fulfil their draft dreams despite missing out on invites to their respective states’ draft combines. These combine lists are often the best indicators of clubs’ interest in players, with at least four nominations required for those who were not selected in the two national Under -17 showcase games last year. Outsider talent from the Vic Metro regions is next to go under the microscope, and there are plenty of prospects around the mark despite missing a full year of football.

Below are pocket profiles of some players to watch, which will also feature in our upcoming annual AFL Draft Guide.

One of the more unlucky players to miss out on a draft combine invite this year, Cardillo has plenty of traits which should appeal to recruiters. With explosive speed, great agility and a penetrating kick, the Calder midfielder showed a good amount of promise across 18 NAB League outings as a bottom-ager.

A developing ruck/key forward, Diedrich was included in this year’s Vic Metro academy hub on the back of just three NAB League appearances in 2019. The raw 199cm tall has some strength to build and production to lift, but has nice upside as he fares well both in the air and at ground level.

One of the 19-year-olds in contention, Delahunty was set to make the move to Victoria this year to suit up for Northern in the NAB League and North Melbourne in the VFL. He instead turned out again for GWS in the Academy Series, showcasing his athleticism and versatility as a tall defender who can also swing forward.

Another who missed out last year and was set to switch to Northern, Gawel has the kind of upside recruiters like despite only having a small sample size to show. He has exciting athletic attributes and can make things happen on the ball both up forward and potentially from midfield in future.

A likely type who showed his wares in the back-end of last year’s NAB League season, Watson could have been one to really come on in 2020. He has shown his capacity to find a good amount of ball and get it moving forward with his booming left boot. Having played on the outer, he can also move to the inside of midfield.

While he was squeezed out at the pointy end of the season, Elliot proved an important part of Oakleigh’s premiership midfield with his ability to extract and compete at the coalface. He is a big-bodied type who was forced to adapt in other roles at times, but would have been looking forward to permanent midfield minutes in 2020.

Another key midfield cog in Oakleigh’s stacked 2019 premiership side, Jenkins is a smaller type who finds plenty of the ball and goes about his business with intent. Along with Elliot, he shone in the absence of Oakleigh’s stars during the mid-part of the season and ended up registering 18 impressive games.

A swingman of sorts, Tucker is one who was poised to make a big impact in 2020 with a full NAB League season. He is a solid marker of the ball who can impact at either end of the ground, but looked to be settling nicely into a key defensive role. He is already a nice size for it, too.

Another 19-year-old prospect, but one who has not gained a massive amount of elite-level exposure. After impressing for Brighton Grammar in last year’s APS season, Flockhart was set to join Sandringham’s NAB League and VFL programs, hoping to continue his steep rate of development as a lean and versatile tall with great upside.

Having very narrowly missed the cut for this year’s AFL Academy intake, Hipwell took it in his stride and looked to prove his doubters wrong in 2020. Drawing inspiration from past teammates, the inside midfielder has worked hard on improving his outside game to better complement his contested ball winning ability.

A bolter from last year’s crop who was set to go around once again, Lewis is a raw type with good potential. At 192cm, he is a prototypical athlete with strong running ability on the outside, whether that be carving off half-back or the wing. He would have looked to improve his production and contested work.

McKay loomed as one to watch for Carlton fans in 2020 given his ties to the club as the son of 244-game Blues champion, Andrew. He remains father-son eligible and has some nice traits, including hardness at the ball and his ability to play both through midfield or in defence. Could come into greater contention with a full year in 2021.

Failli may be small, but packs a punch as a zippy ball winner who can also impact up forward. His size, smarts and agility bode for more time in attack should he get to the next level, with his defensive work-rate also suitable for that small forward role.

Another Next Generation Academy (NGA) prospect tied to the Western Bulldogs this year, Raak is a developing defender who reads the play well and shows sound composure on the ball. He may be building up to key position size and would prove a handy developmental type for the Bulldogs’ Category B rookie list.