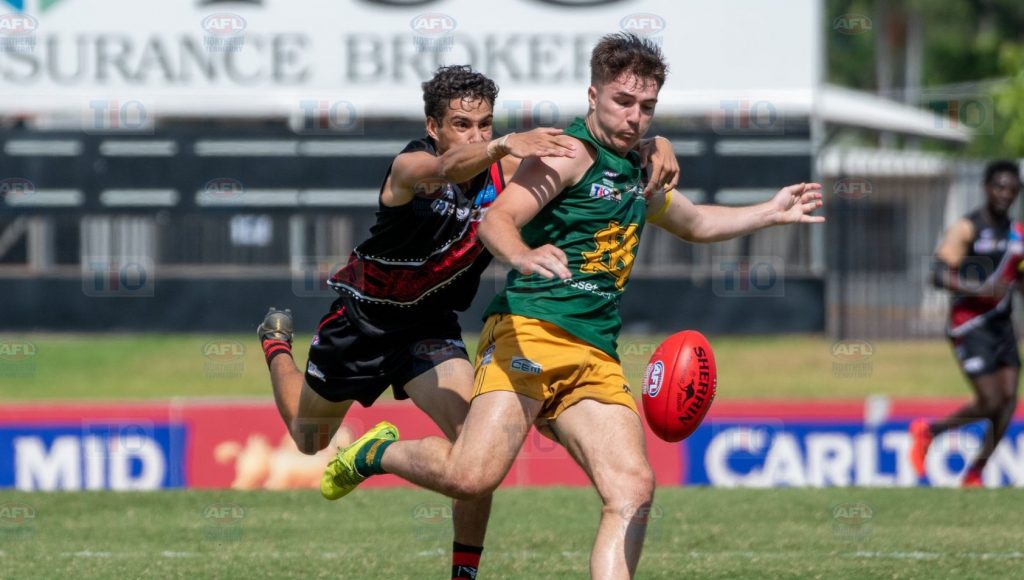 ROUND 9 of the Northern Territory Football League (NTFL) Men’s Premier League rolls on this Saturday, with four games to be played across seperate venues for just the second time this season. Waratah hosts Wanderers in the weekend’s lone top five clash, but finals ramifications will also be at play when Southern Districts takes on St Mary’s, as either side bookends the bottleneck forming between third and sixth. Meanwhile, Nightcliff and Darwin will hope to strengthen their respective finals pushes as they meet the bottom two teams. That, and more in our weekend preview.

Tiwi’s search for a maiden win in season 2020/21 returns to home base on Saturday afternoon when reigning premier, Nightcliff comes to town. The Bombers have not only lost every game thus far, but also lay claim to five defeats of over 50 points to seem them planted to the wooden spoon spot. Nightcliff’s season has come with a couple of hiccups, most recently at the hands on Southern Districts, but the Tigers remain in a strong position at 6-2. This looms as the first meeting between these sides this season, so a clean slate for competition presents.

Allen Christensen looms as a big inclusion for Tiwi and should provide some good forward drive from midfield alongside the likes of Adam Tipungwuti and Fletcher Carroll. Youngster Brayden Rioli also looks set for a return to the top flight, named next to Austin Wonaeamirri on the full forward line. Nightcliff’s forwards will be looking to bounce back from a feeble display last week, while the likes of Dom Brew, Daniel Bowles, and Mack Rivett provide some grunt from further afield. Veteran utility Cam Ilett is also fresh of a three-goal haul, so will again provide a focal point for the Tigers.

An opportunity for Southern Districts to crack the top five presents on Saturday as the Crocs lock horns with St Mary’s at Norbuilt Oval. Both teams are in winning form coming into their first clash of the season, with Districts taking in a string of three victories, including one over Nightcliff, while St Mary’s five wins have all come in the last six weeks. It makes for an intriguing battle which should impact the shape of the top five, as St Mary’s heads a bottleneck between its third place, and South Districts’ sixth.

In a welcome relief for the Crocs, Luke Kiel has been cleared to play after having his rough conduct charge withdrawn at the tribunal. He lines up in the forwardline, while Ed Barlow is among a host of big names named on the extended bench. Under 18s goalkicker Tom Demamiel could also make his Premier League debut having impressed upon his promotion to Division 1. The Saints look like boasting some handy inclusions too, with Nick Yarran back among the starting lineup alongside Shannon Rioli. Spearhead Jackson Paine is still absent though and Shaun Edwards‘ name is not on the team sheet.

The round’s only top five clash takes place on Saturday night as Waratah hosts ladder leader, Wanderers at Gardens Oval. It has been largely smooth sailing for the Muk Muks after eight games, boasting a 7-1 record and soaring to first place last week. A loss to Nightcliff is the only blemish on their record. Waratah’s path has been much more up-and-down, but the Warriors bounced back from consecutive losses last week with a crucial win over Darwin to remain fifth.

Tahs look set to welcome back a couple of very handy players, with spearhead forward Michael Newton back among the fray for his second outing this season, while gun midfielder Abe Ankers returns after missing last week. Marlon Motlop is a big inclusion on Wanderers’ side, adding to a mix of players already in sparkling form on each line. Among them, Dane McFarlane is thriving in midfield, Brodie Newman continues to boss the defence, and Brett Eddy is leading the competition’s goalkicking charts with 34 majors in eight games.

Darwin will hope to recapture its early-season form when it faces Palmerston at TIO Stadium on Saturday night. After accelerating to a 4-0 start, the Buffs have lost three of their last four matches but still boast a positive record at 5-3 overall. Their feats have been good enough to retain a top five place, something which seems a far cry from Palmerston’s efforts thus far. The Magpies gave Wanderers a scare last week and picked up a win over Tiwi in Round 2, but have since lost five-straight games. One of them came against Darwin in Round 3 to the tune of 44 points.

Palmerston should regain some firepower with Daniel Stafford, Nigel Lockyer Jnr, and Jonty Patrick all in contention to return and make up three spots in the front six. Darwin has some good stock around the mark too, with Michael Hagan and Jalen Clarke named on an extended bench alongside playing-coach, Cameron Stokes. In a blow to the Double Blues’ midfield, Jarrod Stokes has been suspended for striking and will spend a fortnight on the sidelines. This could prove a danger game for Darwin, or the perfect opportunity to bounce back emphatically.