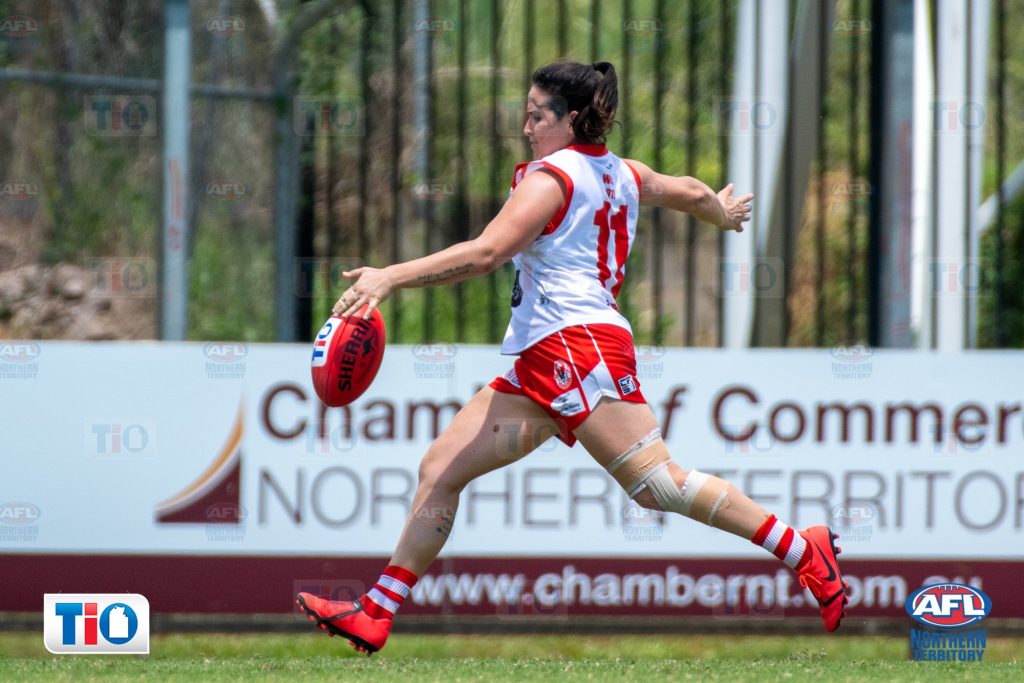 ROUND 9 of the NTFL Women’s Premier League is set to be a big one with some eye-catching match-ups set to headline the round. Tracy Village will have their work cut out for them against a dominant Pint side while St Mary’s will be chomping at the bit coming off the bye. Meanwhile, Nightcliff has the week off, and will hope results go in their favour to attack the second half of the season.

Fresh off the bye and determined to keep second spot, expect the Saints to throw everything they have at Southern Districts who are coming off a tight contest and will be ruing their missed opportunities. Southern Districts have plenty of firepower, able to blow teams out of the water but will need to put out a consistent four quarter effort to reduce the chance of the same thing happening in consecutive weeks. On the other hand, the Saints are proven winners thus far this season, and with fresh legs will have plenty of run in them against the Crocs.

Tayla Thorn will be one to watch for the Crocs given her explosiveness inside 50 and ability to convert, nailing 13 goals in the past two games, with her bag of 10 one of the most impressive hauls so far. Grace Mulvahil is another barometer for the side, able to navigate her way towards the big sticks coming off a two goal spree and proving more than a one-trick pony – as is Jessie Brock, showcasing the array of talent and variety of avenues the Crocs have. The second placed Saints have a number of goal scoring options with Michaela Long and Ash Melnikas slotting 11 and eight goals respectively throughout the season. Danielle Ponter is another handful to keep a watchful eye on, highlighting the number of options the higher-ranked side have heading into the contest, able to pile on the pressure consistently.

It will be a big ask for Tracy Village this round, yet to secure a win and faced with top of the table Pint who have seven straight wins on the board. Pint know how to win and have shown that more times than not, constantly attacking the footy and exploiting their opponents with their silky ball movement. In the past three weeks the Razorbacks have only managed to slot one point, highlighting their struggle and inability to impact the play, and will have to bring their A-game if they are chance of ruffling the feathers of Pint, who are full steam ahead despite only narrowly getting over the line in Round 8.

Although Tracy Village have struggled to find the big sticks throughout the course of the season, Megan Wiley has been known to bob up every now and then to hit the scoreboard. A couple of familiar names in Zhoe Clarke and Kahla Dumbris have been consistent figures for the Razorbacks and will once again have to lead the way for the side, as will the likes of Kiri Marschall and Sarah Wilson who were both named in the bests last round for their high output. For Pint, Casey Morris leads the charge inside 50 with eight goals to her name so far this season making her one to watch while Amy Chittick is also a handy option around the big sticks. Pint have the luxury of being able to share around the goalkicking duties with a number of players able to step up to the plate and deliver, with Jasmyn Hewett proficient across the ground and in front of goal as is Gemma Cusack.

Waratah will be riding high after a stellar victory in Round 8 trouncing the Razorbacks by 176 points and will be hoping to bring that same intensity against the Wanderers in this clash. Currently sitting in sixth place, there is only one game separating the two sides showcasing just how much is at stake for both teams. The Warriors proved their extensive depth in their last outing, finding a number of players who were able to do some scoreboard damage while the Wanderers had glimpses of brilliance and will be hoping to find some continuity in their performance this round.

Danica Pedersen proved to be a real handful up forward last round, booting a bag of six and will be eager to keep that hot streak going as will teammate, Lisa Miceli who has taken her season tally to 11 goals. Another player that cannot be overlooked is Jenna Singh, renowned for her pluckiness around the goal front while Molly Cooper and Monet Hunter are coming off strong performances. The Wanderers will have to be on song from the opening siren if they are to halt Waratah in their tracks and cause a boilover. In saying that, the Wanderers have no shortage of options inside 50 that know how to find the big sticks, with Sophie Fazzolari and Shekeine De Satge both prominent figures in attack. Morgan Johnston is another one to keep a constant eye on given her explosive nature alongside Tishara Davern, with the duo a force to be reckoned with.

The Buffettes will come in as hot favourites due to their third ranking, seeing them muster up five wins for the season so far compared to the Magpies’ seventh position, showcasing the stark difference between the two sides. However, Palmerston are coming off a strong performance in Round 8 and will be hoping to replicate that same intensity and attack for the ball in this clash. To keep in touch with the top two, Darwin must win this game while if the Magpies want to hike up the ladder now is the time as the competition hits the midway point of the season.

Despite only playing two games for the season, Crystal Browne has proven to be the go-to-girl up forward bagging eight goals, six of them last week making her a real livewire each time she steps out. Although Iesha Ronberg is not overly prominent on the goal scoring front, her ability to cover the ground is what makes her a standout while Laquoiya Motlap is another promising player for the Magpies, able to navigate her way around goals. For the Buffettes, Zoe Anderson is the real barometer and one the Magpies will be hoping to stop given her tenacity and goal nous already taking her season tally to 14. Delsey Ah Wang and Machaelia Roberts are a couple of other impressive players for Palmerston, as are youngsters Tayla Hart-Aluni and Dominique Carbone making for an exciting clash between the two sides.