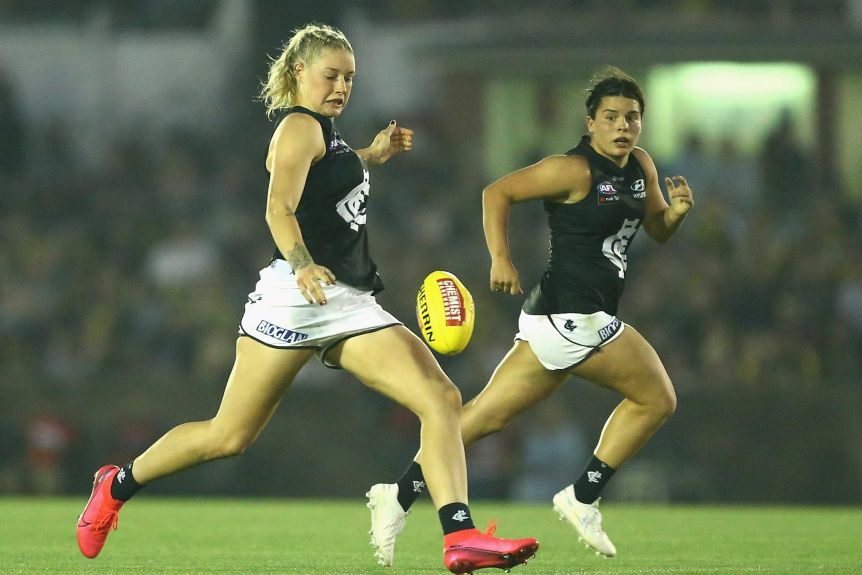 AS the AFL Women’s (AFLW) clubs continue their preparation for the 2021 season, AFLW fans eagerly await the announcement of the fixture. The only hints provided so far came from AFL Chief Executive Officer Gil McLachlan last Friday, when he anticipated that the season will commence in early February with nine home and away rounds and three weeks of finals.

Here are the five matchups that we hope to see in the fixture when it is finally released.

A matchup between the two best teams of 2020 is an absolute necessity for 2021. Fremantle went undefeated in 2020 and the Kangaroos only lost once – to Melbourne in Round 1 – but we never got to see these sides face each other during the season. Among many other dream matchups on the field, the midfield battle between Jasmine Garner and Kiara Bowers would be thrilling. Had COVID-19 not forced an abrupt end to the season, we probably would have seen these two sides battle it out in the 2020 Grand Final. It would be fitting to open 2021 with the matchup that should have concluded last season.

These two sides produced one of the best matches of the 2020 season when Carlton came out on top by eight points at Richmond Oval. Led by superstars Darcy Vescio and Maddy Prespakis, the Blues were too skilful for the Crows in the second half. However, Adelaide was undermanned due to injuries, including anterior cruciate ligament (ACL) tears that kept premiership stars Chloe Scheer and Chelsea Randall out for the season. They will both be returning to the field in 2021 and should lead Adelaide back into finals contention. The Crows have also recruited Jess Sedunary, Hannah Munyard and Lisa Whiteley from other clubs to strengthen their stocks, while Carlton got the prized signature of former Melbourne co-captain Elise O’Dea to bolster their midfield. Both sides will look stronger on paper and it would be fascinating to watch another clash between the 2019 AFLW Grand Finalists.

A rematch of last year’s semi-final between these two sides would be a must-see affair, as it was arguably the match of the year when the Kangaroos just got over the line by two points. Britt Bonnici was brilliant on the day in a losing side, as were Jaimee Lambert and Bri Davey. These Magpies stars will be hoping to attain their club’s first finals win in 2021, and they would certainly love another opportunity to defeat the side that eliminated them in 2020. That will be easier said than done against the star-studded Kangaroos, who will be hell-bent on contending for their maiden AFLW premiership in 2021.

These two sides played out a classic contest in 2020 when the Dockers got over the line by one point, and there is no reason why a clash between them in 2021 could not be just as good. While Fremantle have one of the best sides in the competition, St Kilda is also building strongly on the back of young stars Georgia Patrikios, Caitlin Greiser and Nicola Xenos. Despite not winning the 2020 matchup, this was when the young Saints developed the belief that they could match it with the best. They would love to go one step further and upset the Dockers in 2021.

The list would not be complete without arguably the biggest rivalry in AFLW, Carlton and Collingwood. Carlton has been the more successful AFLW side over the journey, but Collingwood appear to be on the way up after making their first finals appearance in 2020. Magpies defender Stacey Livingstone added plenty of spice to their rivalry following their 15-point defeat of the Blues last year when she said in an interview, “you’ve just got to stop [Tayla Harris] in the air, that’s her game. If you can do that, she’s useless.” This is the type of spirited commentary that fans love to see from players, as public sledging only adds intrigue to the competition. Let’s hope that we see more aggression and trash-talk between these two sides in 2021, as the lead-up to the match could almost be as entertaining as the contest itself.