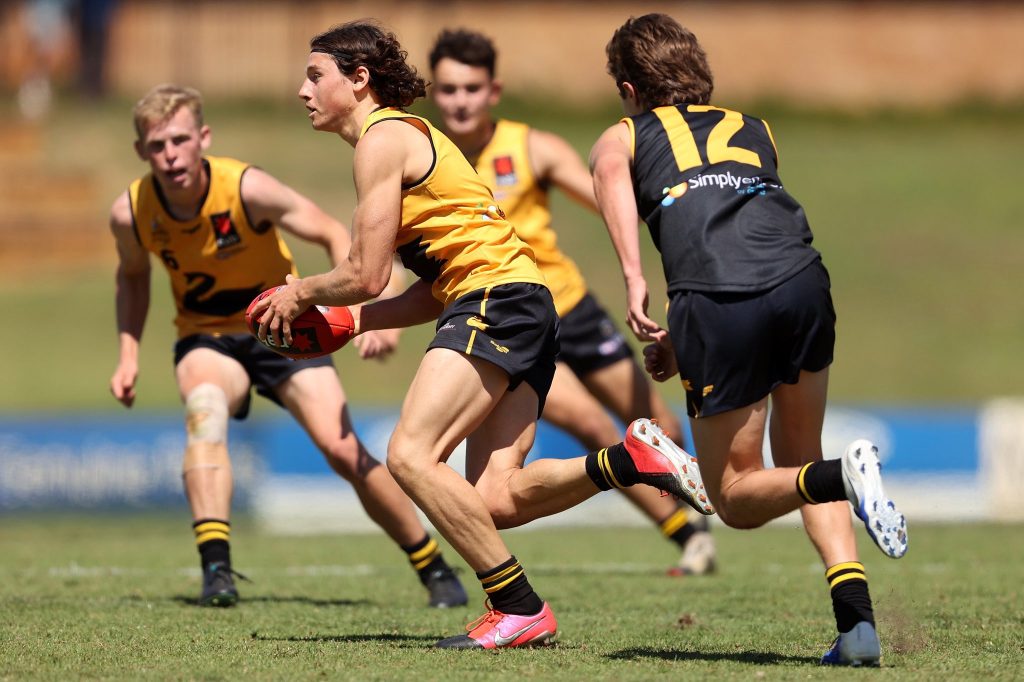 In Draft Central’s newest series, we take a look at some of the draft prospects who remain in contention to fulfil their draft dreams despite missing out on invites to their respective states’ draft combines. These combine lists are often the best indicators of clubs’ interest in players, with at least four nominations required for those who were not selected in the two national Under 17 showcase games last year. West Australian talent on the precipice are next to go under the microscope, and there are plenty around the mark after an exciting season of WAFL football.

Below are pocket profiles of some players to watch, which will also feature in our upcoming annual AFL Draft guide.

Collins caught the eye towards the latter end of season 2020 and capitalised on being selected for the Under 18 All Stars games with a couple of solid performances. He is a competitive type on the precipice of key position height, able to play on medium and tall forwards.

Part of Fremantle’s NGA, Haddow could earn a rookie spot after proving a key cog in East Fremantle’s Colts defence this year. He is a medium height but has enough strength to play against bigger opponents, providing a safe outlet on the last line. Could also develop into a midfielder with his ability over the ball.

Earned his way into this year’s state academy intake and showed good development as he moved from a forward role, to being used almost exclusively as a defender in 2020. He is generally a good user by foot who can also impact aerially with intercepts.

An agile outside runner who plays off half-back or the wing, Sears is a player capable of breaking the lines in transition with his speed and use by foot. When afforded the time and space, he can gain good meterage with running bounces and also hit the scoreboard.

A hard-nosed prospect with plenty of courage, Gorringe adjusted well this season to a defensive switch having previously cut his teeth as an inside midfielder. He is a no-frills kind of player who straight lines the ball and can split contests while also applying punishing defensive pressure.

Guelfi is the kind of player who provides real spark in attack, able to create and rack up score involvements while also fulfilling his defensive duties as a small forward. He is the brother of Essendon’s Matt and does plenty of exciting things on-field.

A tall forward with good marking ability, Martin came on strongly as a 19-year-old prospect in 2020. He lead Subiaco’s goalkicking charts with a total of 13 and a full year of senior WAFL football has seen him stay in the draft conversation.

Page proved a player who was hard to deny this year after a terrific season at Colts level. He booted two goals in Subiaco’s Grand Final triumph and also kicked a bag in the first All-Stars game, putting his name on the map. He is an accurate set shot who also brings others into the game and has decent athleticism.

A mature-age prospect who was previously on Sydney’s AFL list, Fisher moved to WA this year and took out the Sandover Medal in his debut campaign. He is clean at the contest and has no trouble finding the ball, but is working on his explosive burst out of congestion.

Johnson is a tough ball winner who dominated the Colts competition early in the season to earn a Reserves berth. He works hard going both ways and racks up consistent numbers, but may be working on adding some polish to his game.

The best afield in game two of the Under 18 All-Stars fixtures, Spyvee is an exciting midfielder who zips forward as a terrific attacking catalyst. He won the 2019 Colts premiership with Claremont and impressed upon hitting the League grade late this season.

Ugle is a smooth-moving outside type who loves to run. He impressed enough in Swan Districts’ Colts side to earn selection in the Under 18 All-Stars games, where he provided plenty of x-factor. He comes from good footballing pedigree and is said to be a terrific character.

Vanirsen won this year’s WAFL Colts best and fairest and was best afield in the Grand Final as Subiaco earned premiership glory. He is hardly a flashy type, but adds great value as a reliable and clean ball winner who has peaked at the ideal time.

A midfield bull who won mountains of the ball at Colts level, McPartland proved his worth in 2020 as a 19-year-old prospect. He drives the ball forward through sheer grunt and power while also tackling hard, but may look to tidy up his disposal in future. Also fared well at League level late in the season.

A solidly build ruck prospect, James was a solid performer for the Bulldogs’ Colts side. Rotating forward from the engine room, James used his strong frame to impact aerially and provide first use to his midfielders. Also featured in the Under 18 All-Stars games.

Mallard is a giant in the ruck and won more hitouts than any other player in this year’s WAFL Colts competition. He is a talented prospect with plenty of upside, able to mark well around the ground as one of the more impactful and mobile ruck options. Was an Under 16 and 18 state representative.

Featured Image: Max Spyvee during this year’s Under 18 All-Stars showcase | Credit: (Retrieved from) @WAFLOfficial via Twitter