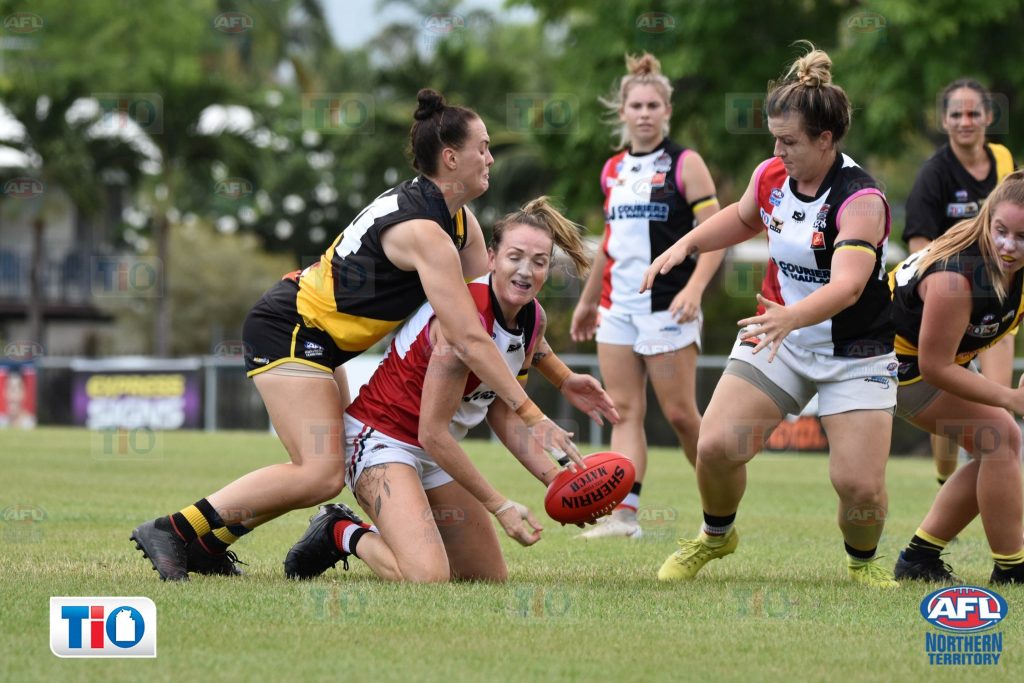 IT was a mixed bag of results in Round 8 of the NTFL Women’s Premier League with a draw and a couple of close encounters headlining the round. Tracy Village continued their winless start to the season decimated by Waratah while second placed St Mary’s were gifted the bye.

The Magpies got off to a blistering start, dashing whatever hopes the Wanderers had of securing a win with a six goals to one opening term. Although the scoring dried up in the second quarter, Palmerston found their kicking boots once more in the third to pile on four goals and all but seal the deal against the Wanderers. The win marked the Magpies’ second for the season, leapfrogging their opponents into sixth while the Wanderers only have one victory to their name.

Despite the loss their were a couple of key contributors with Sophie Fazzolari finding the big sticks with relative ease to walk away with three majors while Shekeine De Satge once again hit the scoreboard to make it two weeks straight thanks to her two goals. Keyona De Satge and Morgan Johnston were the other two players to find their way onto the goal kickers list with a goal apiece. Cassie Ormsby continued her hot form, named in the best for her third consecutive week as was Tishara Davern credit to their high output across the ground. For the Magpies, Crystal Browne proved to be the go to girl walking away with six majors for the afternoon while in her first game for the season Daysia Creed-Wray managed to slot a major as Tabitha May also impressed named in the bests once again.

It was a demolition job by the Warriors who simply exploited the languishing Tracy Village at every turn, keeping them scoreless for the entire game. It was all one way traffic as Waratah seemed to have the ball on a string and were deadly inside 50 converting at a relatively high rate credit to the class across the ground. The Razorbacks had no answers for Waratah who were relentless in their attack of the footy and defensive pressure to shut down any opportunities that arose despite it only being their second win of the season.

Danica Pedersen went bang for the Tahs registering an equal game-high six majors showcasing her impressive goal nous and sheer skill inside 50. She was well aided by fellow goal scoring machine, Lisa Miceli who booted six goals of her own while Jenna Singh also chimed in with a handy five majors. Molly Cooper managed four while Monet Hunter was the only other multiple goalkicker in their resounding win. It was not the same story for Tracy Village however a couple of familiar faces were once again in the midst of the action with Zhoe Clarke and Sarah Wilson plying their trade across the board for the Razorbacks. Kahla Dumbris and Kiri Marshall also joined Clarke and Wilson amongst the bests in another gruelling outing for the bottom of the ladder side.

It was always going to be a tight battle between the two sides given the closeness on the ladder sitting fifth and fourth respectively and the game well and truly lived up to expectations with the contest going down to the wire. A strong fourth term saw Nightcliff fight their way back into the contest and record a draw after staring down the barrel of a 26-point deficit at three quarter time. Southern Districts flew out of the blocks early, creating a handy buffer and kept their foot on the throat up until the final term when Nightcliff kicked it up a gear to completely shift the momentum piling on five goals to one.

There was no shortage of multiple goalkickers for either side with the work of Jacqueline Anyon-Smith and Darcy Elliston not going unnoticed slotting three goals apiece for Nightcliff. In her second game for the season, Amy Pittman stepped up to the plate with two goals to her name while Mickayla Ward continued her hot streak nailing a major and named in the bests for her third straight week. Lauren Gooden was impactful managing a goal while Sophie Hatzismalis led the way with her on-field performance. Tayla Thorn was once again a menace managing three goals, a slight step down from her 10 the week prior. Jessie Brock and Grace Mulvahil recorded two goals each while Ebony Miller starred for the Crocs. Emma Forsyth was her consistent and dominant self, named in the bests a third time from her five games this season.

The top four battle between Pint and Darwin Buffettes delivered the goods with neither side backing down or leaving anything to chance. In the end it was Pint that snuck home a two-point victory to keep their undefeated record intact and keep a firm grip on top spot. The ladder leaders seemed to have things on their own term in the opening quarter of play before the Buffettes settled into the groove of things to wrestle back momentum and subsequently steal the lead. Darwin tested Pint at every term, never far away from the action and applying scoreboard pressure before the Queen Ants fired back in the final term with a goal and two behinds as both sides rued their inaccuracy in front of the big sticks.

Casey Morris led the way inside 50 for Pint bagging two goals to take her season tally to seven. Hillary Grubb also found her range finishing with a major to her name as did Amy Chittick and Jasmyn Hewett showcasing their ability to share the goalkicking load. Erin Hetherington was recognised for her efforts across the ground as was Jacinta Reid who was named in the bests for her second time in as many weeks. Lucinda Hamilton also plied her trade across the ground for the winners. The Buffettes are yet to release their bests or goal kickers.