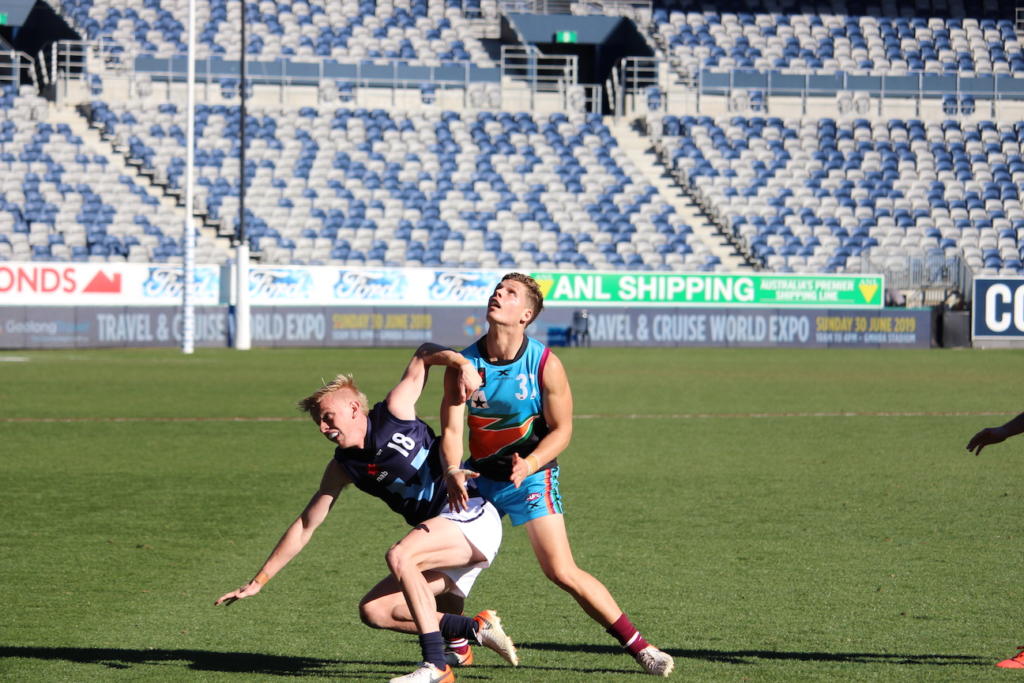 In Draft Central’s newest series, we take a look at some of the draft prospects who remain in contention to fulfil their draft dreams despite missing out on invites to their respective states’ draft combines. These combine lists are often the best indicators of clubs’ interest in players, with at least four nominations required for those who were not selected in the two national Under 17 showcase games last year. Talent from the Allied states and territories (NSW/ACT, Northern Territory, Tasmania, and Queensland) on the precipice are next to go under the microscope, and there are plenty around the mark after exciting seasons around the nation.

Below are pocket profiles of some players to watch, which will also feature in our upcoming annual AFL Draft guide.

A 2019 state combine invitee, Chandler plied his trade with the Murray Bushrangers but hails from just over the NSW border. He is an exciting forward who can leap high and possesses a smooth left-sided kicking action.

Driscoll is a versatile tall who obviously thrives aerially, but has the point of difference in being able to rotate between key defensive and ruck posts. There is plenty of upside to the GWS Academy member, but he is not yet the finished product.

Gaden is a well-built key position prospect who can impact at either end of the ground or even in the ruck with his strength and smarts. He impressed last year and as an over-ager in 2020 during the Academy Series.

He may be small, but packs a punch. Grant showed some impressive form as a nuggety inside midfielder during this year’s Academy Series after missing out as a top-ager. He is a zippy, hard-working midfielder who will likely translate better as a forward.

One of the most outstanding pure athletes available in this year’s crop, Okerenyang lit up combine testing this year with his speed and explosiveness. He is still a very raw footballer but has obvious upside and has represented NSW/ACT at Under 16 level.

A high-flying type who possesses great versatility and athleticism, Pfrengle brings plenty of x-factor whenever he enters the play. He will be working on turning those glimpses into consistent form as he develops.

Roseby has proven to be a reliable inside midfielder with great tenacity and leadership qualities over his time with the Swans Academy. He is a solid ball winner at ground level with clean hands and the ability to run hard all day.

A prospect which Sydney fans have been keeping a particularly close eye on, Rossmann is a classy midfielder who can win his own ball while also posing a threat inside attacking 50 with great smarts and agility.

Another strong Swans Academy candidate, Sheather is a true utility in the sense that he can play both small and tall up either end, while also developing as a midfielder. He already cuts a strong figure and has handy athletic traits.

Lui has plied his trade in all sorts of roles but seems to have settled recently as a tall, rebounding defender. He had the tough job of marking Joel Jeffrey in this year’s NT Under 18 All-Stars game and held his own. Currently playing for Palmerston in the NTFL.

Another NT prospect who is currently playing senior football in the NTFL, Rusca also ran out for Gold Coast in this year’s Academy Series and is tied to the Suns through the Darwin zone. He likes to take the game on with speed on the outside.

A 19-year-old prospect who has shown promising glimpses in 2020, Buckland stands out with his speed and willingness to move the ball on in the forward half. He played into some good form late in the QAFL season for Palm Beach Currumbin.

Cashen-Harris is a prospect who certainly caught the eye this season, running out for the most part with Wilston Grange in the QAFL. He also represented the Lions Academy in 2020, impressing with his explosive speed and smothering defensive pressure.

Colenso came into 2020 with big wraps after taking out last year’s QAFL Rising Star award. He ended up a premiership player with Morningside while also turning out for the Suns Academy, garnering attention with his big frame and strong defensive game up forward.

An incredibly natural small forward, Gore was one of a few unlucky Northern Academy prospects to miss out on being drafted last year. He bounced back with a terrific senior QAFL season with Broadbeach while also showing his smarts inside 50 with the Suns Academy.

An athletic tall who can play on every line, Pickering obviously excels aerially at 200cm. He impressed this year during his time with Broadbeach and also for the Gold Coast Suns Academy, showing signs of his development.

Reeves is a hard-working midfielder who can play both inside and out, as shown during his breakout Academy Series performances. He also enjoyed a solid QAFL season playing mostly on the wing, providing good grunt going both ways.