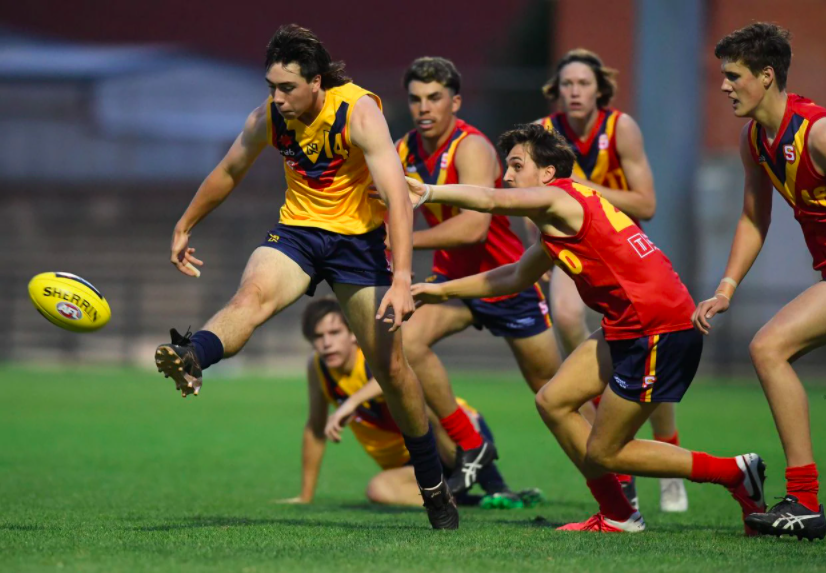 In Draft Central’s newest series, we take a look at some of the draft prospects who remain in contention to fulfil their draft dreams despite missing out on invites to their respective states’ draft combines. These combine lists are often the best indicators of clubs’ interest in players, with at least four nominations required for those who were not selected in the two national Under 17 showcase games last year. South Australian talents on the precipice are the first to go under the microscope, and there are plenty around the mark after an entertaining year of SANFL football.

Below are pocket profiles of each player, which will also feature in our upcoming annual AFL Draft guide.

Carey has spent most of 2020 on the sidelines due to nasty injury niggles, but was a tall prospect of interest coming into the year having been included in the SA state academy hub. He can play in the ruck or at either end of the ground, is mobile for his size, and capable of taking big contested grabs.

As somewhat of an undersized ruck, Fahey-Sparks covers the ground well and doubles as a forward threat. The 22-year-old’s strong athletic base and added League experience saw him really come into his own during 2020, proving dominant in the air and confident around the ground.

The shortest and most forward-oriented player of this lot, Holder proved to be a reliable target for Glenelg and Sacred Heart in 2020. He is below true key position height at 190cm but has a strong frame and covers good ground, ensuring he is difficult to halt on the lead and in contested marking situations. Was included in this year’s state academy hub.

The rangy Eagles bigman made the move down to Henley High this year and performed well there while also juggling his SANFL Under 18 duties. He was his side’s primary ruck option and fared well at the centre bounces with his directional work, but is still improving on his strength, forward craft, and ability to have a greater impact around the ground.

Some may remember him taking out the 2019 SANFL Grand Final sprint, but Grubb is much more than merely a sprinter. His pace certainly helps when breaking lines and taking the game on, while also making for some punishing closing speed in the attacking half. As a December-birth, Grubb still has plenty of upside and development left but has already featured at League level.

Another who falls into the forward/wing category, Horsnell played out a full season among Glenelg’s Reserves setup in 2020 and also showed his wares by hitting the scoreboard during the Under 18 All-Stars fixture. He is a creative user on the fly who works hard up and down the ground, while also posing a threat close to goal. Had early interest as a state academy hub member.

Nelligan proved plenty of doubters wrong with his performances after missing out on a draft combine invite. The hard-working midfielder played a key role in Norwood’s SANFL Under 18s premiership and also gained senior experience earlier in the year. He is not overly quick, but is a natural ball winner who thrives at ground level and is not afraid to get his hands dirty.

A 19-year-old prospect who has garnered attention on the back of a super SANFL League campaign which saw him boot 19 goals in 15 games. He was selected in the Under 18 All-Stars fixture come season’s end where he spent time rotating between the midfield and forwardline. McCreery gets stuck in on the defensive end and can often provide a spark just when his side needs it.

One of the most talked about mature-age hopefuls in this year’s crop, Rowe is a natural footballer who knows where the goals are. He was the equal-leading SANFL League goalkicker this year after earning a state combine invite in 2019 and played a vital role in Woodville-West Torrens’ premiership triumph. The 21-year-old looks ready as ever and would appeal to clubs crying out for a small forward.

A key defender with great poise, Hilder has worked hard since missing out on draft honours last year. He again rotated between the Roosters’ League and Reserves sides after gaining some experience in 2019, showcasing some of his best attributes at senior level; namely a strong marking ability and reading of the play from behind the ball.

A small-medium defender who has come on leaps and bounds this year, Mansell allayed late injury concerns to help Woodville-West Torrens take out the premiership flag. The Tasmanian native was a key rebounder out of the back half and showed good skills with ball in hand, while also bringing a hard edge to the side. It could be his year after being overlooked twice.

An outside-leaning utility who can carve up the opposition by foot on he wing or across half-back, Park served a reminder of his talents in 2020 after being overlooked in last year’s draft. He is still quite lean but measures up at a good height and has great upside, with his rebounding ability particularly effective for the Bays. His versatility will also appeal to recruiters.

Another who was unlucky to be overlooked at last year’s draft, Parks has taken to senior SANFL football with aplomb since making the move to Glenelg in 2020. The Sydney Swans Academy graduate impressed this year with his athleticism and courageous intercept marking in the back half, and has a good frame to keep up with the rigours of League football.

The stylish half-back finally broke through to the League grade in 2020 and became a hit among Woodville-West Torrens highly touted team. Kicking is his greatest asset, with the left-footer able to hit targets both short and long to act as a key playmaker in the back half. Interest has grown in the 22-year-old this year having come from a fair way back.

Andrews has made improvements after missing out on draft honours for two years running, credit to his work-rate and willingness to succeed. The Victorian moved to South Adelaide in 2020 after NAB League experience with the Western Jets and added superb midfield balance to the Panthers’ side. He is now a readymade size and has built great consistency, with speed and kick penetration highlights of Andrews’ game.

A balanced ball winner with break-neck acceleration, Chamberlain was a clear standout among West Adelaide’s struggling Under 18s side. After proving a class above for much of the season and racking up plenty of possessions, he moved up to the Reserves grade and was eventually rewarded with a League debut. He is still quite light and can improve his kicking on the run.

A strong inside midfielder who thrives in contested situations, Kraemer overcame injury troubles to make an impact in the back-end of the season. He is a leader among the Panthers’ group who bases his game on Josh Kennedy and prides himself on his defensive acumen – so much so, that he even succeeded in a move to defence. He has been working hard his speed and overall running capacity as a midfielder.

A tough inside type who can also rotate forward, Liddy loves to compete and wins plenty of the ball at stoppages. He formed a near-unstoppable combination with first round prospect Tom Powell in 2020 and was consistently among Sturt’s best players at Under 18s level. His ability to stand up in tackles, shrug off opponents, and release slick handballs are all key features of his game.

McNeil is another who proved plenty of doubters wrong in 2020 after being overlooked as a top-age draft prospect last year. Since, he slotted straight into Woodville-West Torrens’ League side and became one of the competition’s best young players, adding terrific balance in his play from midfield. He is a handy ball winner who usually contributes neat disposals and can play inside or out.

A talented junior cricketer made of leadership material, Murphy opted to chase another type of red ball in 2020 as he committed to football. He is a solidly built inside midfielder who also plies his trade in defence, entrusted with kick-in duties on account of his composure and clean disposal. He also proved to be an apt decision maker, showing good awareness in the back half despite not being the most athletic type.