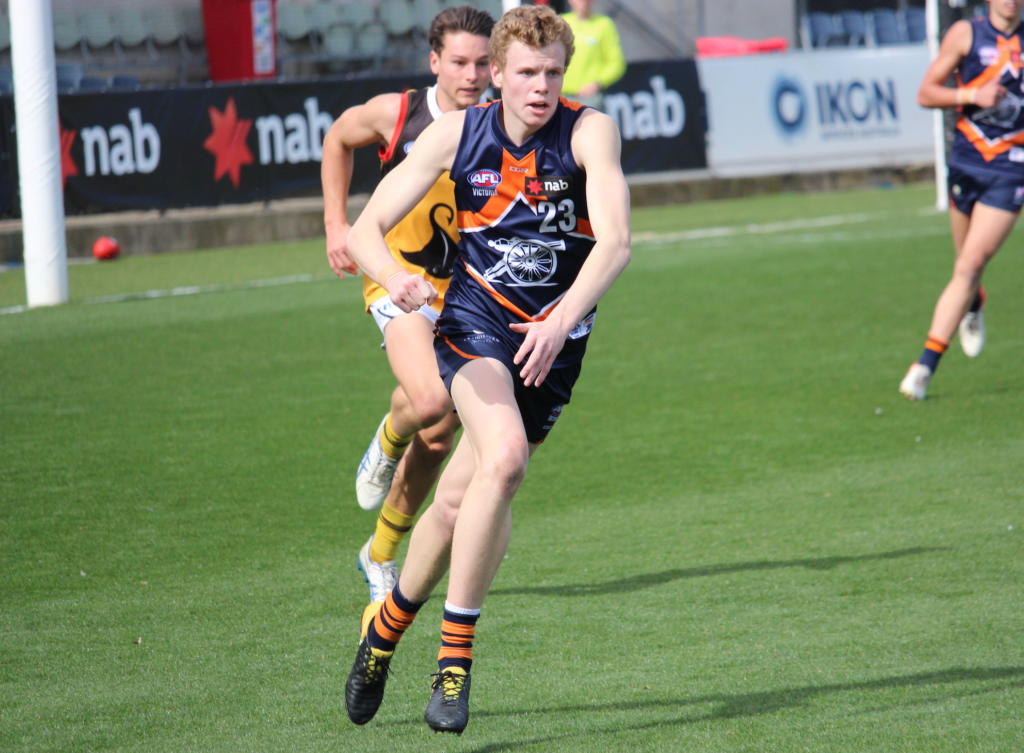 Next under the microscope is Essendon, a team which will have plenty of say in shaping this year’s top 10. The Bombers could become the first club since the expansion era to utilise three top 10 picks, but will more likely get busy during live trading time to move even further up the order and shake things up. Despite key personnel leaving during trade period, the Bombers have somewhat covered their bases and will look towards long-term fulfilment to help the club rise from what was a disappointing 13th place finish in 2020. Under new coach Ben Rutten and with one of the most valuable hands in this year’s draft, Essendon could set up the base for its first finals win since 2004 with this intake.

Whether Essendon retains pick six as its first choice come draft day remains to be seen, but there are options aplenty for the Bombers should they carry their current hand. Riley Thilthorpe fits the key forward need to a tee while also being able to second as a ruck option. The 201cm South Australian is also in the mix to be taken by Adelaide with pick one, but would be a terrific get for the Bombers should he slide to their first pick. A bid on Sydney Academy member Braeden Campbell may also be in the offing if no club does so beforehand, and not just to keep the Swans accountable either. Campbell fits the Bombers’ need for some outside speed and x-factor through the middle.

Gold Coast, Hawthorn, and Sydney hold the picks before Essendon’s current first and could all be in the market for a midfielder, potentially ruling out the likes of Will Phillips and Tanner Bruhn. In any case, those two are quite similar to what the Bombers already have through midfield in terms of size and inside tendencies. Denver Grainger-Barras could also still be on the table despite his top five billing, though Essendon may look at a key defender a little further down the order. With the Bombers expected to move into the top three picks (see below), Logan McDonald and Elijah Hollands are essentially the two players who will be targets one and two, but that is pending some high-stakes action at the trade table.

Essendon arguably holds the most important hand in shaping the top 10 and could well end up right at the pointy end given it lays claim to three selections in that range. Pick two looks like being the Bombers’ primary target, with a combination of two of their picks between six and eight likely to yield that selection and a later pick in return. North Melbourne is the team to do business with in that case, and the Kangaroos’ current need to maximise incoming talent could see them keen to split high-end picks.

As stated above, one of McDonald or Hollands will likely be the go-to options if such a deal goes ahead and both are players who fill different list requirements. McDonald is the kind of contested marking key forward the Bombers have been crying out for, while Hollands is a tall midfielder who provides invaluable x-factor among the engine room and also poses a goal threat. Their choice would essentially depend on what Adelaide does with pick one, as there is no real loss in getting one over the other.

A factor which will enter Essendon’s thinking later on is when or if other clubs will place bids on its NGA prospects. The Bombers’ next pick falls at 44 and Cody Brand may attract some interest around that range, perhaps leading Essendon to proactively split that pick. Josh Eyre is the other hopeful in contention but Bombers staff will hope he can sneak through to the rookie draft despite his upside. With adjusted bidding rules in place, the Bombers also have a decent amount of late picks stockpiled if required. Ultimately, it means both players are likely to be Bombers, with two or three more picks coming out of their current top 10 hand.

Will Essendon be able to trade into the top two?

Are picks six/seven, six/eight, seven/eight too much for pick two alone?

How many academy bids will Essendon place?

Will Essendon bid on Reef McInnes in the top 10?

Will a bid on Essendon’s NGA prospects come before pick 44?